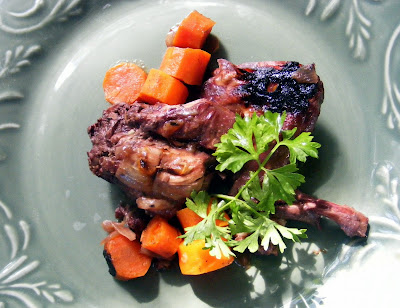 It’s fall. And as I traveled across the southwest of France, I saw hunters out with their dogs in the fields. My father was a hunter, which is why I know enough to make a distinction between Thumper in "Bambi" and a delicious rabbit stew set in front of me. But for all of you who are overcome by that "awwww" factor, maybe you should skip this month’s recipe. For those of you who have had to fend off rabbit attacks on your vegetable garden, however... well, maybe you’ll understand Old Mr. MacGregor enough to cook up a pot of bunny stew.
If you need more convincing, know that rabbit meat is high in iron, which all bodies need to stay healthy. And its fat content is similar to that of chicken or turkey (i.e. low), even though it’s classified as a red meat. Rabbit is also low in saturated fats, which means it doesn’t produce the "bad" cholesterol, LDL. All of which rank rabbit as a healthy food. Does that help?
In French, civet means "stew", but it’s a far cry from its German relative, hasenpfeffer. First of all, there’s no vinegar or pickling spices or schlag. That would be German. This is French... full of herbs and wine.  France in a pot. And a nice meal on an autumn day.

- Heat the olive oil. Sauté the bacon and the onion. Add the garlic and cook for another minute.
- Brown the rabbit on both sides. Once it’s browned, add the flour and cook for one minute, stirring. Add the bay leaves, thyme and parsley.  Pour in the half bottle of wine and the equivalent of a half bottle of hot water. Bring back to a boil, then lower the heat, cover and let simmer for about an hour.
- Add the carrots and cook until both they and the rabbit are tender.

If you need another vegetable, try steamed potatoes or rice or macaroni.

Serve with a full-bodied red wine.

P.S.  For more on bunnies, you can go to one of my previous blogs:  The Rabbits of Roissy.  And the good news is that I just spotted one of them on my last trip back from France, hopping merrily across a grassy patch between taxiways, then disappearing down a rabbit hole.  And no, he wasn't white, nor did he carry a fob watch and mutter "I'm late!"  I have no idea why rabbits would want to burrow in such a noisy area which must tremble with every plane that takes off or lands... and that would be about one a minute for most of the day.  It doesn't sound like Prime Bunny Real Estate to me.  Go figure.  Or ask Bugs.