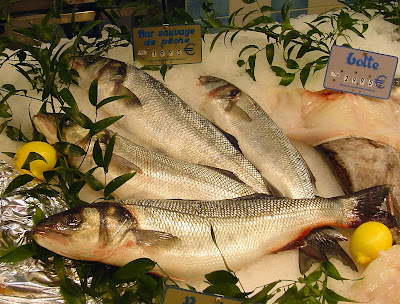 Sea bass is a delicately flavored fish so it should please even those who don’t like “fishy fish” such as sardines, herring, even tuna or salmon.  That’s why the fennel is added:  to zip its blandness up a bit.  Famous French chef Raymond Oliver calls it insipid and says it doesn’t need to be scaled; just gutted.  To each his own.  The fishmonger will prepare it for you anyway, unless you fish it out of the Mediterranean all by yourself, in which case you’re on your own.
Chef Oliver grills it over dry fennel sticks.  Good luck finding any of those.  Luckily, he also suggests stuffing the fish with fennel fronds before broiling it, which is how I’ve always found it served in French restaurants.
Whichever way you do it - outside on the grill or inside under the broiler - a three-pound sea bass will take 20 minutes to grill, 10 minutes per side.  Couldn’t be easier.
Serve it up right away with simple melted butter over the top, or else flambé it with some cognac, or better yet anisette, if you have it.  The licorice-y taste will accentuate the fennel.
Accompany it with a green salad sprinkled with sliced black olives, some crusty French baguette and a crisp white wine and you’ll see what August on the Riviera is all about.
1 comment: 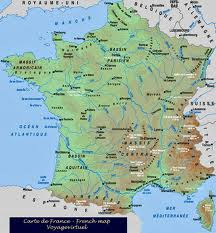 "But I know nothing about French history," you might say.
"Ah, but you do!" I would reply.
Robin Hood? Richard the Lionhearted? Prince John? Sound familiar?
Religious? How about Saint Patrick?
Or a bit harder now: William the Conqueror? Eleanor of Aquitaine?

Let's take it chronologically.
England was a "green and pleasant land", as the hymnal says, until 1066 when William the Conqueror, Duke of Normandy, sailed across the Channel from France and defeated England's King Harold in the famous Battle of Hastings. With that defeat, England's fate changed hands for two centuries.
English, which had flourished as a language, now was spoken only by the Common Man, while Latin governed the church and French (in its Norman version) ruled the castle. For example, though English serfs raised and ate pig, by the time it reached the Norman's table it was porc. Sheep became mouton, ox or cow became boeuf, calf was veau and deer, venaison. (Do those French words sound familiar? If not, ask your butcher.)
﻿
﻿      Now for the easy part. Remember Richard the Lionhearted (think Robin Hood) and his evil brother Prince John? Well, they are two of the sons of Henry and Eleanor. And where did Richard die? No, not in Sherwood Forest or on one of the Crusades, but at Chinon in France’s Loire Valley, at the castle where Joan of Ark later offered her services to help "throw the English out of France", services for which said English burned her at the stake. And where are Henry, Eleanor and Richard buried? No, not in London's Westminster Abbey. Their graves are in the Abbey of Fontevrault, again in France's Loire Valley.
"But what’s this about St. Patrick," you ask? Well, he was born in England, carried off into slavery by Irish raiders, then later after being freed studied at the Abbey of Lérins, on a tiny Mediterranean island off of Cannes. Right next to the island of The Man in the Iron Mask (but that's another story).
﻿
﻿


So you see, you may never have set foot in France, or read about its history, but you know a lot about it. You just didn't know you did.

William the Conqueror? Go to Bayeux and see the famous tapestry woven by his wife Mathilda.
For Richard Lionheart, tour Chinon and its castle.
For Eleanor, Richard and son Henry, visit Fontevrault Abbey near Chinon.
For a touch of Aquitaine, try any Bordeaux vineyard or truffle farm in Périgord.
Joan of Ark? Choose Chinon, or Tours where she bought her armor, or Lorraine where she was born, or Rouen where she was burned.
For St. Patrick, take sunscreen, travel south and hop a ferry from Cannes to St. Honorat Island.

And for you film buffs, watch "The Lion in Winter" - the 1968 version with Peter O’Toole and Katharine Hepburn - for a fly-on-the-wall view of some momentous family feuds between King Henry and Queen Eleanor at Chinon Castle.