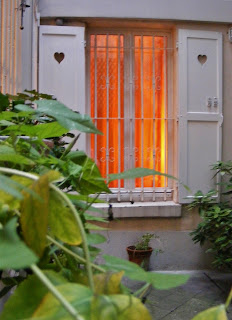 Easy like Sunday morning.
A lyric from a song that doesn’t apply here.  Except that it is Sunday morning, and it’s an easy one because there’s no To-Do List.
Except food shopping.  Because it’s France and tomorrow’s Monday and that means shops are closed to offer shopkeepers a delayed week-end.

My plan, such as it was, was to head out early, to beat the lines.  But when I wake up and open the shutters, it’s seriously raining.
So I switch plans, such as it is, and make myself a leisurely cup of tea and read a bit... but not in the garden.  Around 10, the rain stops although the sky is still resolutely clouded over.  I put on a jacket, grab my shopping bag, my camera and my coin purse and I’m off downhill to the Purveyors of Good Things to Eat and Drink. 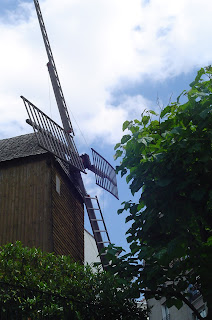 I decide to take the High Road, the opposite direction from the square, and come out the far end of my street onto the usual tourists taking pictures of Le Radet, one of Montmartre’s two remaining windmills.  With a “pardon” and an “excuse me” and an “entschuldigen”, I weave my way through the throngs.  It’s just this one spot with its knot of sightseers that’s a problem.  Past that is the green-and white remake of the Moulin de la Galette painted by Renoir which no one seems to want to photograph... and then the Galette windmill itself, the second one remaining. 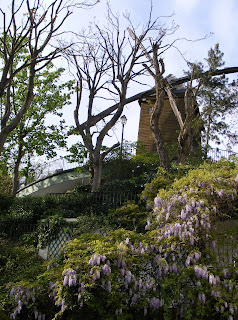 This one, Le Blute-fin (they all had names), was refurbished recently by French film director Claude Lelouch, in exchange for permission to build an apartment underneath its base.  His semi-circular bay windows are rarely even visible from the street, but from his windows he has a helluva view out over Paris, including the gilt of the Invalides dome in the distance, with today’s backdrop of clouds.  My zoom makes it look within arm’s reach, but it’s actually half of Paris away, 5 kilometers (3 miles) to be exact. 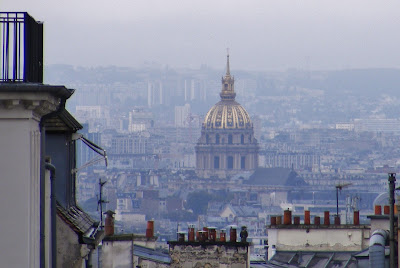 My needs are few:  boudin from the Auvergne lady, chicken from Jacky Gaudin’s butcher shop, a bottle of Chinon from Manu’s Caves des Abbesses and a red bell pepper from Au Verger des Abbesses.  In fact I don’t even need to make a list.
First is the Auvergne shop.  I’ve been meaning to buy some of her blood sausage since last week-end, but then Life Happened, as John Lennon would say.  I end up buying not only the boudin, but also a slice of pâté aux morilles (those are morels, which I love), a tiny one-portion raw goat’s milk cheese from Rocamadour, and a box of those luscious, thin, crisp butter cookies from Salers that are called pavés (paving stones).  So now I have a full four-course meal. 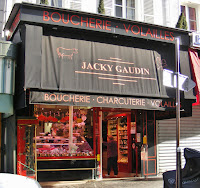 Next it’s back up the Rue Lepic to the butcher on Rue des Abbesses.  Somehow I resist all the other things that he offers for sale and stick to my original two chicken legs.  Jacky asks me if I want them cut in half (thigh + drumstick), which is very professional and considerate of him.  I hadn’t thought of that, but I agree and thank him.  When I go to pay, the woman behind the counter asks me if I’m the chicken thighs.  I smile and say, “Yes, I danced ballet when I was young.”  She looks perplexed for a moment and then breaks out in a huge smile, realizing the other possible interpretation of her question. 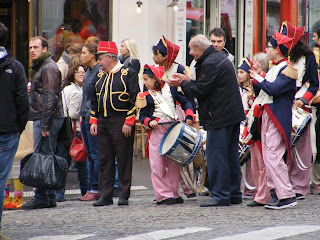 As I leave the butcher shop, I hear a drum roll.  It’s a sound I’ve known for ages:  the P’tits Poulbots de Montmartre.
(An aside here: In the early 1900's, Montmartre was a slum, with poor health conditions, lots of orphans, and many artists.  One of the artists started sketching the orphans.  His name was Francisque Poulbot and he became rich and famous for those sketches of les enfants de la rue, the children of the streets.  In return, he opened a dispensary for them right down on Rue Lepic.  The drum corps came later, as a free activity for kids too poor to afford extra-curricular activities or go on holiday.  And it’s still going strong.) 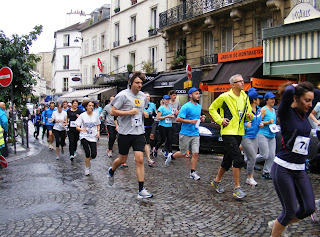 I get out my camera - this is why I always have it handy. Suddenly runners start streaming by.  It turns out to be a 10-km race through Montmartre’s streets to help fund the P’tits Poulbots, which is why their drum corps is present.  There are at least 100 runners taking part, and the Poulbot drum corps strikes up a welcome for them as they pass on every lap.  A race in Montmartre is a real challenge, because level surfaces are few and far between.  The Rue des Abbesses is one, and the joggers  revel in it after that last grueling stretch up the steep Rue Lepic.  I’m used to the hills, but that’s at walking speed, and with numerous stops in various shops.  This is way more serious.  Except for the clown who amuses both the runners and the children looking on, a break from the boredom of Sunday shopping with mom or dad. 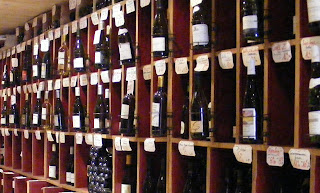 A quick stop into the wine shop for a bottle of chinon, and then across the street to the green grocer, dodging the jogging stragglers (or straggling joggers).  There, my “one bell pepper” resolution goes to pieces and I end up with two (one red and one orange for a Basque chicken dish tomorrow), plus some neatly manicured green beans and a serving or two of those delectably sweet, tiny early potatoes from the island of Noirmoutier.  I get handed a free bouquet of parsley as well, complete with a big smile.  When I ask Fathi why he’s not out there running in the race, he replies that he only runs after women. 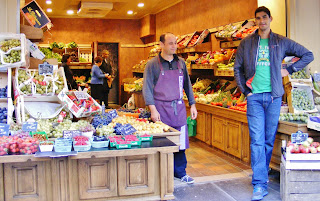 Back up the equally steep Rue Ravignan with a stop into the bakery for half a baguette to go with my goat cheese, and a bit left over for breakfast tomorrow... then I’m home, through my gate and across my garden.  Without any rain, but probably only because I took my umbrella with me. 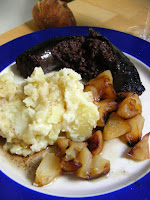 It’s time to start lunch.  First boil the potatoes.  That gives me time to do last night(s dishes.  With time left over to peel and cut up some Canada apples to make applesauce for the boudin aux deux pommes - the two apples (deux pommes) in question being apples from the trees and apples from the earth.  They cook down easily and I add the boudin to the pan.  It browns itself while I cut up the cooked potatoes, add milk and butter and smoosh them into mashed potatoes.  It’s all perfectly timed. Now to eat it.
And then a nap.  The museum will have to wait until tomorrow.
No comments: 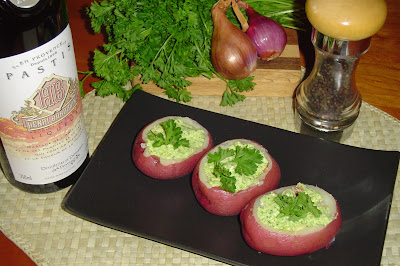