Recipe of the month: Chou farci 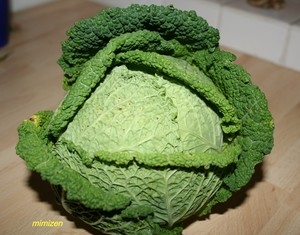 It’s March, the month that dedicates a day to St. Patrick.  But what does he have to do with France?
Well, he was born in Roman England (Wales, actually) in the 5th century and at age 16 was carried off into slavery in Ireland by Irish raiders. After six years he escaped, returned to Wales and joined the priesthood.  Still no French connection? Aha!  Patrick went on to study in France at the Abbey of Lérins, a then-renowned monastery on a tiny Mediterranean island called St. Honorat off of Cannes.  Right next to the island of The Man in the Iron Mask (but that's another story).
So you see, St. Honorat - France - St. Patrick - Ireland - stuffed cabbage.  Or rather chou farci.
In France, say chou farci and people will think Auvergne, the ancient central highlands created by now-extinct volcanos.  And yet there are other regional recipes.  In Alsace, the dish is made with a red cabbage stuffed with chestnuts and poached in red wine.  On the Riviera, you’ll find a green cabbage stuffed with salt pork, wrapped in cheesecloth and boiled in lots of water.  In parts of the Alps, vermicelli pasta is added to the cooking water and served up as a soup before the main course of stuffed cabbage.
But one thing they all have in common:  this is a poor people’s dish, whether in France or in Ireland.  Cabbage grows even in poor soil, without a lot of care and even when it’s fairly cold.  If you can’t grow it yourself, it won’t blow your budget when you get to the store’s cash register.  So much for the chou. As for the farci, the meat used in the stuffing can be leftovers of any kind (veal, chicken, beef, pork).  Just grind it up and you’re set.
So try it out.  It’s pretty easy and very tasty, especially on a cold day.  And if you make it on St Patrick’s Day, you can even dress in green for dinner.


- Remove any outer cabbage leaves that are discolored or hard.
- Wash the head of cabbage and cut out enough of its center to make a cavity large enough for the stuffing.
- Put the cabbage in a large pot and cover it with boiling water.  Add 1 t of salt for each quart of water.  Bring the water back to a boil, then lower the heat and simmer covered for 5 minutes. Remove the cabbage from the water and turn it upside down to drain.
- Crumble the dried bread and mix it in with all the meats plus the onion, egg, pepper and herbs.  Add about 1½ t of salt and mix well.
- Check that the cabbage has drained well.  Spoon the stuffing mixture into the cavity, and if the outermost leaves are loose enough, slip a bit between them.  Tie up the package tightly with cooking string.
- Place the cabbage in a Dutch oven or large heavy pot and pour in 1 c of stock.  Cover and bring to a boil, then reduce the heat and simmer 45 minutes.  Add stock as needed.
- Blend the flour with the butter to form a roux and add it to the stock.  Then add the tomato paste.  If the liquid is too thick, add more stock, bit by bit.  Cook for 1-2 minutes.
- Remove the cabbage, take off the string and serve whole or cut up.
- Serve up the sauce separately to be spooned over the cabbage as desired.

You can use the cabbage you cut out to make another dish.  In poor man’s cuisine, nothing goes to waste.  Plus the stock can be used as a base for a vegetable soup.
If you want a red wine from the region to accompany this dish, try a St. Pourçain, a blend of gamay and pinot noir varieties.
No comments: