Out and About: Exhibits: Osiris, Mystères engloutis d'Egypte

An old friend has suggested meeting at the Institut du Monde Arabe, the museum that specializes in All (Art) Things Arab.  And the subject of the particular exhibit she wants to see interests me greatly:  Ancient Egyptian artworks found underwater just off the delta of the Nile.
There’s a bus that will drop me off directly in front of the museum, although it takes a very long time, given Paris traffic.  We manage to find each other in spite of my lateness, have a bite of Middle Eastern food at the museum’s café... and then we step into the darkness (perhaps a bit too much darkness) of the netherworld.

“Osiris, the son of the Earth and the Sky was killed by his brother Seth, who cut his body into 14 pieces and threw them into the Nile.  Isis, sister and wife of Osiris, put the body of the god back together again using her magical powers, and conceived their son, Horus. Osiris then became the Lord of the Afterlife, and Horus, victorious against Seth, received Egypt as his heritage.”
That’s how the exhibit starts:  with an explanation of the gods revered, especially Osiris. My first thought was “Doesn’t that first line remind you a bit of the Bible?”  If you see the Earth as being Eve and the Sky as Adam (or vice versa), Osiris would become Abel and Seth would be Cain.  And there you have a parallel story of fratricide.
That’s only one of the many thoughts I have while walking through this magnificent exhibit of the many wonders archaeologists have literally dredged up from the bottom of the Bay of Aboukir, where they’d lain for centuries.  Luckily, the delta muck actually preserved the artworks somewhat from the corrosiveness of the salty Mediterranean water.  But it took much painstaking work to remove all the algae, barnacles and other mollusks without damaging the artworks, as shown in several videos projected on the walls and in the small theater area complete with benches for those of us whose legs are getting tired. 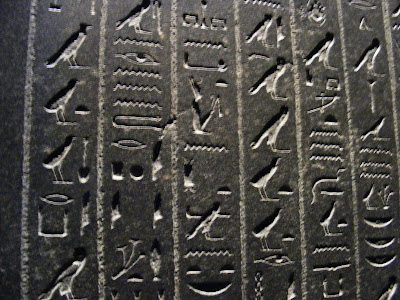 The exhibition is made up of three sections. The first presents the myth of Osiris, and is guarded by a huge statue of Hapi, the god  of the annual flooding of the Nile.  The largest of the three parts is the second, which covers the archaeological sites and the ritual celebration of the mysteries of Osiris.  The final section shows how the ancient myth evolved over time and space, how it was adapted at different sites, which explains the diversity of the myth’s representations. 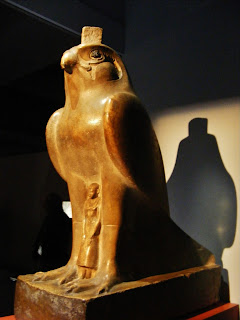 Throughout, the lighting is minimal, which makes it hard to read the explanatory signs - although one of the guards said they would be pumping up the lighting a bit in a few days because they had so many complaints.  Still, the darkness accentuates the drama of the actual art pieces, which are spotlighted just right: easy to discern by leaving enough shadow to set off a statue’s inscriptions and features.
In the footage taken underwater, you see how the artworks were discovered, then uncovered, and what difficult conditions the archaeologists had to work under.  Murky doesn’t even come close to describing the visibility the divers “enjoyed” as they carried out their underwater excavation five miles offshore at the Magnus-Alexandria, Canope and Thonis-Heracleion sites.  The last two of these sites stretched over an area of 7 x 6 miles (11 x 10 km), a gigantic undertaking when everything is covered by up to two millennia of sediment.  But magnetic and bathymetric (underwater topography) exploration equipment proved up to the task.

Why were all these masterpieces under water?  Because of natural catastrophes.  The delta region experienced earthquakes several times, some of them powerful enough to cause tidal waves.  And then there’s the annual flooding of the Nile, which was heavy some years.  There’s also the sheer weight of the buildings, given that some were constructed on clay soil, which provides a poor foundation.  In addition, the eastern Mediterranean has been sinking for centuries, and the level of the Mediterranean has been rising, a fact that will only continue with today’s trend toward global warming.  All this combined to cause catastrophes in the 2nd century BC, along with the 5th and especially late 8th centuries A.D.
All these works are on loan from various museums of Egypt.  Seeing them together in one place is a gift, and also very powerful.  As my friend and I left, we were blinded by the Paris sun - something hard to do at this season of the year - our heads filled with splendid images and our minds raring to find out more about this fascinating topic. 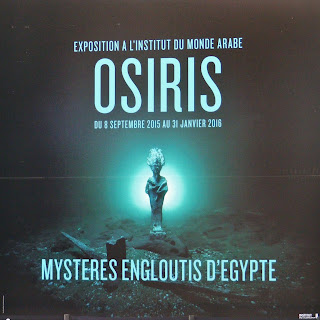 
Here’s the link to the show’s website.  http://www.exposition-osiris.com/index.php?lang=en
If it doesn’t come up in English, there’s a little US-UK flag you can click on to get it.

And here’s a link to an article on the discovery at Heracleion:  http://www.telegraph.co.uk/news/earth/environment/archaeology/10022628/Lost-city-of-Heracleion-gives-up-its-secrets.html
No comments: 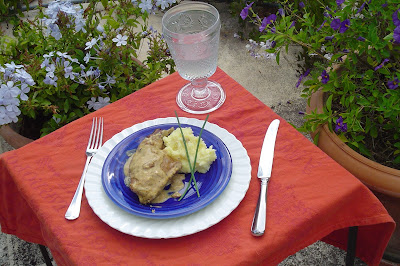 All right.  I know I’m going to lose a lot of you here, but bear with me. This month’s recipe is lapin à la moutarde, otherwise known as rabbit with mustard.  To most Americans, the idea of eating a bunny, a poor little Peter Rabbit, is just too hard to bear.  My father was a hunter, so I grew up eating rabbit, pheasant and even squirrel (which does indeed have a nutty taste).  Wild rabbit, on the other hand, has a fines herbes taste, especially in France where the lapins de garenne of Provence thrive on the thyme and rosemary growing wild everywhere.  Unless you get your rabbit from a hunter, though, the rabbit you’ll find at the market is the farm-grown variety and far less “gamey”.  It tastes a bit like chicken.  Well, turkey actually.
You may also be relieved to know that it is a lean meat.  Low in fat and cholesterol, high in protein, raised without hormones, usually containing no stimulants, additives or preservatives.  And it’s easily digested, which is why the American Heart Foundation and the American Medical Association recommend it for people on special diets.  Have I got your attention yet?
One of the ingredients for this dish, crème fraîche, is something sold everywhere in France but seldom found on the shelves of American supermarkets, although you can usually find it in specialty stores.  Sour cream is too sour and can curdle when cooked.  Heavy cream is too thin. And neither gives the same result.  One solution is to heat (not boil) one cup of heavy cream and then mix it with 1 teaspoon of buttermilk and let it stand at room temperature until the mixture thickens (6 hours or more, depending on the room temperature).   Don’t worry about it going bad; this is how yoghurt is made.   But once it thickens, you have to refrigerate it; you can keep for up to a week.  Hint:  the rest of the buttermilk can be used for a wonderfully rich chocolate cake.  Second hint:  if you did find crème fraîche and didn’t use all of it, you’ll be happy to know that crème fraîche, unlike sour cream, can be beaten into whipped cream.


- Brown the rabbit pieces evenly in the oil and butter over fairly high heat.  (You can play around with the proportion of oil and butter to suit your tastes and diet, but using some butter will give a better flavor and the oil keeps the butter from going brown.)
- Lower the heat and add the rosemary, shallots, salt and pepper.  Simmer covered for about 30 minutes or until the meat is tender, adding a bit of liquid chicken stock or cognac if it goes dry before it’s thoroughly cooked.
- Remove the rosemary.
- Blend the Dijon mustard with the crème fraîche, egg yolks and lemon juice.  Mix well and pour over the rabbit.
- Simmer over very low heat for about 10 minutes, or until the sauce thickens slightly.

Serves 4.  Accompany with rice or boiled potatoes to make the most of the sauce.

You can see it’s an easy recipe:  only 5-10 minutes of preparation for 40 minutes cooking.  You can make it even easier by eliminating the egg yolk and lemon juice, but I think it has more layers of flavor this way.  Or you could make it more rustic by using a bit of moutarde à l’ancienne (the one with the mustard seed in it):  3 T Dijon to 1 T ancienne.  And don’t worry about it being too strong because cooking the mustard removes a lot of its “bite”.

Recommended wine:  a red burgundy (Savigny-les-Beaune) or a dry chablis if you prefer white
No comments: