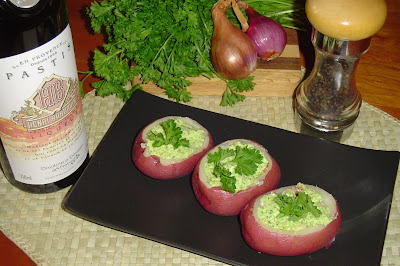 December.  Another whole year gone by!  It never failed to catch me unprepared.  Just barely recovered from Thanksgiving - complete with taking the door off the hinges to seat all the guests in my Paris apartment - and it was already time to think of special dishes for the end-of-year festivities!
Typically, Christmas dinner in France is a family affair; friends are invited for la Saint-Sylvestre, New Year’s Eve.  Christmas dinner used to be enjoyed after Midnight Mass on Christmas Eve, but it’s now often slipped over into Christmas Day.  The typical menu is roast turkey - or goose - with chestnut stuffing, followed by a bûche de Noël.
For those of you who aren’t really fond of the traditional foie-gras or oyster appetizers, this recipe is simple yet special.  The only hard part is scooping out the inside of a cooked potato.  It’s typically French in its ingredients, which I’ve left as Chef Jacques Cagna dictated for those of you actually cooking in France.  The shrimp he uses are petit-gris, a variety that I haven’t seen in America, but which can be replaced by tiny cocktail shrimp, or even larger shrimp cut into small pieces.
Another of the ingredients is anisette, which is easy to find in most French homes, especially in Provence.  This adds another layer to the dish, a special je ne sais quoi, and makes it more festive.  If it’s hard to find or expensive, you can always use sambucca or ouzo.  Or even some anise extract, which you can find in almost any grocery store.
Cagna also uses grenaille potatoes, which are small and smooth skinned.  I’ve replaced them here by red potatoes because of their cheerful red color but more especially because they hold up under cooking and will cause less problems when you try to hollow them out.
So, before Santa and his reindeer land on your roof... to your stoves!  And Joyeux Noël!


- Cook the potatoes in boiling salted water.
- When they’re cooked, cut a thin slice lengthwise off the bottom so the potato lays flat.  Then slice off the top.
- Carefully remove most of the inside.  (As a precaution, cook a few extra, just in case.)  Keep the cooked potato for other uses, for example a potato frittata or to add to a spinach and bacon salad..
- While the potatoes are cooking, mix the butter, parsley, shallot and garlic in a food processor.
- By hand, blend in the nuts (optional), then the anisette.
- Season to taste with salt and freshly-ground pepper.
- Into each potato shell, put three petit-gris shrimp (or several shrimp or shrimp pieces).
- Top with a dollop of the butter mix.  For a pretty finish, use a pastry bag.
- Bake in the oven at 350°F for 10 minutes.


Serve with a chilled dry white wine, such as a pouilly-fumé.  Serves 4.
No comments: