Out & About: Museums - Van Dongen and the Bateau-Lavoir

I’ve lived in Montmartre since 1970.  That’s longer than most of my neighbors have been on this Earth.
Back in those days, the Musée de Montmartre was just a little house built in the 17th century.  That house has a name, the Maison du Bel Air (House of Fresh Air) and originally came complete with a vineyard, which is still there, next door but now separate.  The house was bought in 1680 by the successor to Molière, famous French actor and playwright Rosimonde, as his country home (at a time when Paris was far away by carriage).
Centuries later, the little house is still there, now reputedly the oldest building in Montmartre, and is used for the museum’s permanent collection.
But the building through which you enter, once in bad shape and uninhabited for decades, has now been totally renovated - in the style of the era though! - and houses the museum’s temporary exhibits. 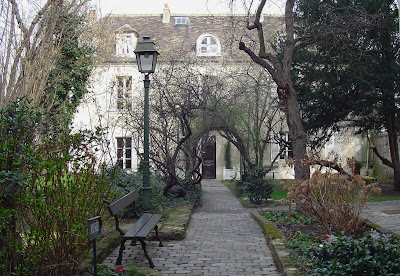 This season it’s Kees Van Dongen, another Dutchman who moved to Paris, as did Jongkind, Van Gogh, and Mondrian.
Invited by Picasso, Van Dongen moved into the now-famous Bateau-Lavoir, a long wooden building where artists lived and painted, side by side, in cramped, cold quarters.  Together, the two shared artistic inspirations, such as the various balls but also the Cirque Médrano, a circus that’s now disappeared but was still there when I moved to Montmartre.  (The two artists also shared women, including Fernande, who was Picasso’s mistress when they met... before becoming Van Dongen’s.)

Like many of his era, Van Dongen shows his classical training in his early works.  It served him well even once he had changed to his new love, fauvism, with its bright colors and the opulent silhouettes that were a slap in the face of his old friend Picasso’s cubism.  Sometimes his canvases seem unfinished, with those bright colors forming only a sort of frame around the subject, and both standing out against a blank background.
His wide-ranging styles are obvious in one corner of the main floor where there are three very different works from one year, 1906.  Chinagrani, on the left, is a very minimalist depiction of the dancer of that name, all in blue and elongated.  On the other end is Le Cirque, an example of his colorful fauvist talent.  Between the two, Aux Folies Bergère is pure Impressionism.
Also on this first floor, in a little alcove, are some works by his good friend Otto van Rees, including a lovely one of his lover, Adya in the Bateau-Lavoir (1904). 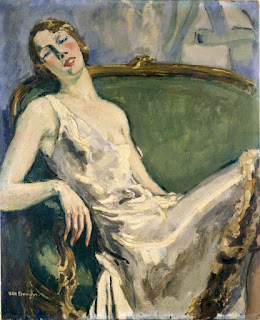 Upstairs are grouped many of the portraits from the 1920's that helped make Van Dongen rich, successful, and even mondain, which could be translated as “part of the glitterati”.  The first is of Marie-Thérèse Raulet relaxing in a typically Roaring Twenties dress, her eyes almost closed, her head resting on the sofa, her hand draped languorously over its arm.  It’s a very different style from Woman Sewing that hangs downstairs, painted with broad strokes to transmit more a feeling than a likeness.  In this later period of his life, Van Dongen became somewhat cavalier about art as a way of making a living.  “The essential thing is to elongate the women and especially to make them slim. After that it just remains to enlarge their jewels.  They are ravished.”
In La Parisienne, the woman’s hands are painted in a much more traditional style, while her face is minimalist and one-dimensional.  Perhaps that is what he called primitivism?

In addition to his paintings, Van Dongen made a living from illustrations sold to various magazines throughout his career.  He was also in demand by authors, including Proust, who wanted him to illustrate their works.  Some of his creations are included in this exhibit.
Most of the works come from private collections, but also from museums in Paris and Holland (Utrecht, Rotterdam, Amsterdam).  As with the Mary Cassatt exhibit at Musée Jacquemart-André, it’s a treat to have the chance to see works that have never before co-existed in one place - including in the artist’s studio, given that they date from different eras.
The exhibit is small, as befits the setting.  But it offers a good representation of Van Dongen’s successive styles and periods.


Two “asides” to this visit.  One is a parenthesis:  Otto van Rees.  The other, at the end of the exhibit,  is a visit of Suzanne Valadon’s actual studio.  She, too, was one of the beauties Van Dongen pursued. 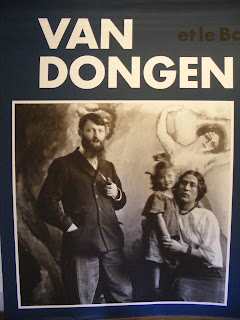 "But I know nothing about French history," you might say.
"Ah, but you do!" I would reply.
Robin Hood?  Richard the Lionhearted?  Prince John?  Sound familiar?
Religious?  How about Saint Patrick?
Or a bit harder now:  William the Conqueror?  Eleanor of Aquitaine?

Let's go chronologically.  England was a "green and happy land", as the hymnal says, until 1066 when William the Conqueror, Duke of Normandy, sailed across the Channel from France and defeated England's King Harold in the famous Battle of Hastings.  With that defeat, England's fate changed hands for two centuries.
English, which had flourished as a language, now was spoken only by the Common Man, while Latin governed the church and French, in its Norman version, ruled the castle.  For example, while English serfs raised and ate pigs, by the time they reached the Norman's table they were porc.  Sheep became mouton, ox or cow became boeuf, calf was veau and deer, venaison.  (Do those French words sound familiar?  If not, ask your butcher.)
In 1154, Henry, Duke of Anjou in France and grandson of William the Conqueror, was crowned king of England as Henry the Second.  Henry's wife, Eleanor of Aquitaine, had previously been Queen of France for 15 years, even going on the Second Crusade with her then-husband, King Louis VII.  But she was a bit too wild and sensuous for Louis.  They became estranged and the marriage was annulled so that Louis could remarry (Catholic country, no divorces).  That meant Eleanor's dowry was returned to her:  the entire province of Aquitaine.  Just as William had brought Normandy into the English realm with him, so Henry brought Anjou and Eleanor, Aquitaine.  Now the borders of England stretched all the way down the Atlantic (with the exception of Wales) from Scotland in the north to Spain in the south, and inland on the Continent almost to the gates of Paris in the tiny kingdom of France.
Now for the easy part.  Remember Richard the Lionhearted (think Robin Hood) and his evil brother Prince John?  Well, they are two of the sons of Henry and Eleanor.  And where did Richard die?  No, not in Sherwood Forest or on one of the Crusades, but at Chinon in France’s Loire Valley, at the castle where Joan of Ark later offered her services to the French king to help "throw the English out of France", services for which said English burned her at the stake.  And where are Henry, Eleanor and Richard buried?  No, not in London's Westminster Abbey.  Their graves are in the Abbey of Fontevrault, again in France's Loire Valley.
"But what’s this about St. Patrick," you ask?  Well, he was born in England, carried off into slavery by Irish raiders, then later after being freed studied at the Abbey of Lérins, on a tiny Mediterranean island off of Cannes.  Right next to the island of The Man in the Iron Mask (but that's another story).

So you see, you may never have set foot in France, or read about its history, but you know a lot about it.  You just didn't know you did.


Additional reseach:
William the Conqueror:  go to Bayeux and see the famous tapestry woven by his wife Mathilda.
For Richard Lionheart, tour Chinon and its castle.
For Eleanor, Richard and son Henry, visit Fontevrault Abbey near Chinon.
For a touch of Aquitaine, try any Bordeaux vineyard or truffle farm in Périgord.
Joan of Ark - choose Chinon, or Lorraine where she was born, or Rouen where she was burned
For St. Patrick, take sunscreen, travel south and hop a ferry from Cannes to St. Honorat Island.