Out & About - Exhibits: Artists in Montmartre

For nearly half a century, I’ve lived in Montmartre off and on.  Mostly on.

So the exhibit at the Musée de Montmartre just over the rim of the hill behind my building covered territory familiar to me.  The exhibit is called Artists in Montmartre:  Mythical Studios and Sites.  There are ten of them, ten addresses, and I know more than half of them well and the others by reputation.

The first of them is the museum itself.  The most famous people to have lived there were The Infernal Trio:  Suzanne Valadon, her son Maurice Utrillo, and her husband André Utter.  They were called that because of the rowdy arguments heard by the neighbors all hours of the night and day.  In addition to temporary exhibits - and the other house, the oldest in Montmartre (part of the Museum) - you can still visit her studio, which will explain perhaps why three people would argue incessantly in such small digs.
Another famous site is the Bateau Lavoir, which easily accounts for about one-half of all the tourists that plague that poor little square right around my corner.  In it lived many now-famous artists.  The most famous would be Picasso, but there was also Van Dongen, Juan Gris and Modigliani.  There were also writers such as Pierre MacOrlan and Max Jacob, along with famous visitors that included Apollinaire, Cocteau, and Gertrude Stein. Its name is an inside joke.  “Bateau” (boat) came from its construction which looked like that of an ocean liner:  little rooms off of a long corridor open to the elements.  “Lavoir” (laundry house) came from the laundry hung out to dry.  The building was actually a piano factory at first.  It burned down the year I moved to Montmartre, but has now been rebuilt in the same configuration... in concrete instead of wood.
The third very famous site is the Cabaret du Lapin Agile.  On the north slope of the Butte Montmartre, right across from the last remaining vineyard in Paris (except for pretend ones that fit in a person’s backyard) and downhill from the Musée.  Built in the early 19th century, it was called “In the Country”, which it was back then.  (Montmartre only became part of Paris in 1860.)  That name was followed by others that reflected the neighborhood’s bad reputation:  Rendez-Vous of Thieves, Cabaret of Assassins.  It was a place people came to drink mostly, especially the thirsty artists, or to recite their unpublished works. Then in 1879 came caricaturist André Gill who painted the tavern’s sign:  a rabbit dancing in a frying pan and balancing a bottle of wine on one paw.  The rabbit became Gill’s Rabbit (lapin à Gilles), thus the name, but written as a word play on “agile rabbit”, given how he’s dancing.  The other story about Le Lapin Agile is the hoax the artists played on art critics in 1910.  They tied a brush to the tail of the owner’s donkey and then submitted the resulting artwork as “Sunset Over the Adriatic”.  It was accepted to the show by the jury, hung among other works... and bought by an unsuspecting art lover.
The last of the well-known sites is the Moulin de la Galette, immortalized by August Renoir and several other artists.  When I moved here, it was being used as a TV studio and several variety shows were broadcast live from there each week.  Then the studio closed and the city sold it, with the proviso that it be rebuilt in the style of the area (as with the Bateau Lavoir).  Now it’s a very ritzy, gated row of units well out of my tax bracket.  But it looks lovely.  Local star, film director Claude Lelouch uses the corner building for projections and other activities open to the public, and especially a week-end something for children, just to get them inoculated with the cinema.  He also restored one of the two remaining windmills, the one with the actual machinery, the one in all those Impressionist paintings:  Le Blute Fin (Fine Grinder).  In exchange for the restoration, the city allowed Lelouch to build something for himself underneath the windmill, with windows looking out over Paris but itself invisible when the trees are leafy.
There’s one site in the show that isn’t there anymore:  the Medrano Circus.  It was still standing when I moved to Montmartre.  A round building with a facade, it had been closed for years, and was ultimately torn down in 1974 to build a modern apartment building with a supermarket on its ground floor.  Very handy if you run out of spaghetti sauce, but far less quaint. If it had survived one more year, it would have been one hundred years old and become a protected landmark.  Toulouse-Lautrec painted the circus acts there often, as did Degas, Renoir, Picasso, Léger and Van Dongen, all fascinated by the theme of clowns and acrobats. 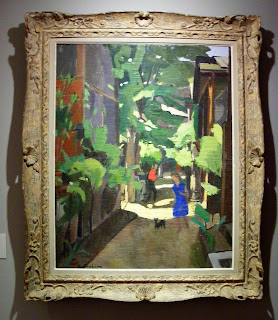 I’ve often walked past the Cité des Fusains, another of the sites, but never gone in.  The studios, repurposed after the 1889 Universal Exhibition for which the Eiffel Tower was built, are still used for artists.  Bonnard and Derain once lived there, as did Max Ernst, Jean Arp and Joan Miro.  Toulouse-Lautrec lived further up the same street.  Expressionist painter and engraver Gen Paul lived in an ex-goat farm only a block from my place, next to a playground my children adopted because it was among the first in Paris to have monkey-bars and such.  I knew a Japanese artist who lived in my building but had studio space in that house.
The other sites are just addresses to me.  One on rue Caulaincourt was the home of expatriate Swiss artist Steinlen, who painted the ubiquitous black cat poster for the Montmartre cabaret of the same name.  The address on rue Véron was home to Adolphe Willette, and for 27 years my old apartment overlooked the Square Willette at the base of the Sacré-Coeur stairway.  The last address is on rue Lepic, directly behind my new digs, where Eugène Delâtre lived.  His name wasn’t familiar, but his pen-and-ink works of Montmartre certainly were.

And there you have it:  both the art exhibit at the Musée de Montmartre and my ramblings about my neighborhood.  The show is worth a detour because you’ll see grouping of artists you won’t see anywhere else.