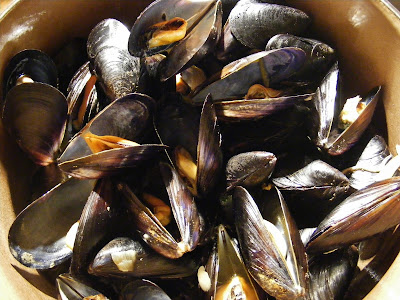 I spent all the summers of my childhood on or near the Atlantic coast in the (then-)pretty part of central New Jersey (yes, there was one, on the Toms River... Island Heights and Seaside Heights).  I learned to swim in the almost-saltwater slightly upriver from Barnegat Bay, on which my father, in his youth, had learned to sail.  Spent my summers walking the sands, digging out clams, then cracking them open on any stones available.  We’d rinse the sand off in the seawater and eat them right there, feet still in the tides.  Couldn’t have been fresher.  (Maybe it’s not a good idea to do that any more, pollution having multiplied since then.)
In spite of all that, I'd never eaten mussels.  Clams, oysters, crabs, shrimp, crayfish, yes.  But no mussels.
When I arrived in France to study at the Sorbonne in 1968, the seafood restaurants in Montparnasse, or the simple cafés that had shellfish on stands next to their entrance, caught my eye.  And set my stomach growling.
Luckily mussels weren't an expensive dish, even for my student finances, which were... shall we just say "limited".
And they were yummy.
Plus they came with French fries.  Moules frites.
So if you can find fresh mussels, and you want to plan a dinner for your covid bubble where you can get your hands dirty on something delicious while keeping up a conversation, all accompanied by a dry white wine... this is for you.
To feed four people, you’ll need:
- 3-4 pounds of mussels, medium-sized
- one large white onion, diced
- 5 or 6 sprigs of parsley, coarsely chopped
- 1½ c white wine
- an optional stalk of celery, strings removed, then diced
- some freshly ground pepper
You’ll need to make sure the mussels are “clean”, which means no barnacles or seaweed still on the shells.  If there are any, just scrape them off with a sharp paring knife.  And make very sure the mussels are all alive, which means not opened.  If some are open, tickle their insides with the knife; if they’re alive, the shell will close.  If the shell remains open, you absolutely must throw that mussel out - it’s shuffled off its mortal coil and could make you very ill.
Once the mussels are clean, put them in a large pot, along with the onion, celery, pepper, and half the parsley.  Pour the white wine over them.  Cover and bring to a boil.  Cook for about 2 minutes, shaking and tossing the pot from time to time to make sure all the mussels are in the juice at one point or another. 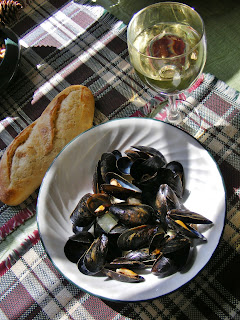 Check that all the shells have opened.  If not, put the pot back on the burner for a minute more.  You don’t want to overcook this or the mussel meat will be withered and less tasty.
Serve up with a slotted spoon into individual bowls, putting the broth in a serving dish.  Along with their own juice, the mussels will probably have given off some sand that was in the shell, so make sure you leave it in the pot.  Decorate with the rest of the parsley.  Couldn’t be any easier
Dig in while it’s hot.  (And provide a big bowl for the empty shells in the middle of the table.)
Serve with crusty French bread if possible, or Italian.  And a dry white wine.
By the way, all the alcohol will have evaporated in the cooking, so you don’t have to worry about serving this to underage diners or non-drinkers.  Trust me.
No comments: