Out & About - King Tutankhamun: Treasures of the Golden Pharaoh 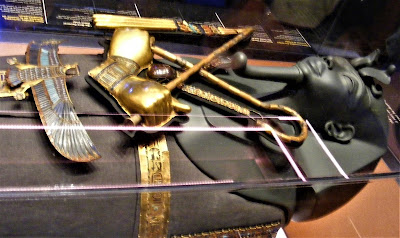 It’s a sunny day in Paris - finally! - and I’m walking across the 2½-acre Parc de la Villette, past the famous Baltard glass-and-iron structure (one of several) that was once the Poney Club where my children learned to ride when they were very young.
Of course before that time, all these buildings were a meat market, replaced by a huge modern slaughterhouse that never slaughtered a single animal because all those activities were hygienically banned from within Paris and sent to the suburbs.  The never-used slaughterhouse was refurbished and is now the Cité des Sciences et de l’Industrie museum, with the Géode Imax theater behind it.
Also within this park on the northeast edge of Paris are the new Paris Music Conservatory, the Cité de la Musique with its museum of all things musical, the Zénith concert and sports arena, the Philharmonie concert hall, the Grande Halle cultural center, a theater and... a riding school... for my grandchildren this time. 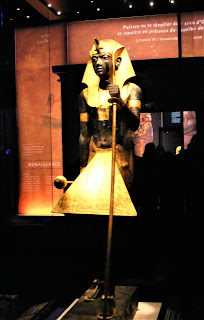 But I digress.
Why am I here?  Because I want to see the “King Tut: Treasures of the Golden Pharaoh” exhibit that’s playing in the Grande Halle.
This will be a bit of a rerun for me.  Or rather a remake.  Because I saw these objects in the Tutankhamun Room of the Cairo Museum when I was there in 2017.  But they were all a hodgepodge, massed together in showcases with little breathing space for them to shine as solo items.  Here in Paris, knowing the French, they will be staged, highlighted, spotlighted in striking fashion.  It’s what the French do best.

And once inside, which involves standing in line, even with a press pass, I’m not disappointed.  The vastness of the building, with its high ceiling, makes for a spacious exhibit.  Sometimes only a few items in any one room... but multiple spectators, so that was a wise decision on the curator’s part.  And spotlights are indeed involved, the entire area being plunged into almost total darkness for maximum effect.  All the better to accent the goldenness of the 150 items, which sparkle from having been newly - and ever-so-carefully - cleaned before the show set out on its worldwide tour. 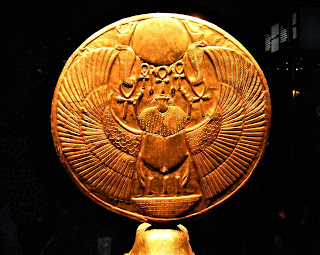 I recognize Tut’s chair and bed from the Cairo Museum, as well as much of the jewelry, pectorals and statues.  But here they are even more striking in their visual solitude.  A solitude poles away from how they were found heaped in Tut’s tomb by Howard Carter in 1924. 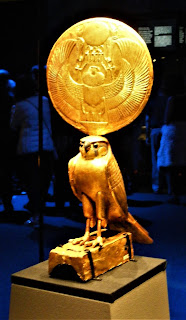 There's a golden statue of my old friend Horus, the hawk, with a magnificent disk above his head.  And a fan with the representation of an ostrich hunt in a chariot etched into its golden surface.
Also striking against the darkness of the room are the alabaster objects:  a wishing cup and - at the very end of the exhibit, to bid us farewell - a statue of the young king, who ruled from age 9 only to age 19.  Ten years in the life of a boy whom we still talk about 3,342 years after the young pharaoh passed into eternity.
In one showcase is a replica of Tut’s sarcophagus, fashioned out of a matte slate-grey material against which the crook and flail jump out at you.  Wondering why the sarcophagus is not part of the exhibit, I ask.  I’m told it was slightly damaged when it last traveled to Paris in 1967.  And so it doesn’t travel any more, to Paris or anywhere else. 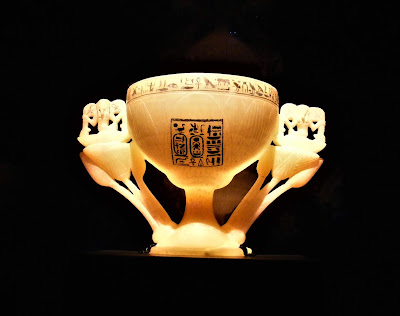 But all the items on display here will be traveling around the globe one last time.  The tour launched in L.A. at the California Science Center in March of last year.  It took in $5 million from about 700,000 visitors, with the Egyptian ministry taking $4 for each ticket.  And that money will help pay for the new Grand Egyptian Museum still being built in Giza, across the Nile from Cairo proper and the objects’ former home in the Cairo Museum.
Paris is the second stop on the tour, a six-month show.  After that, in the fall the Golden King exhibition heads across the Channel to London and then later on to Sydney plus six other cities including in Japan, Canada and South Korea.
We’re told this will be the last time these objects are seen outside of Egypt.  After the tour, these golden treasures will join the others - especially the sarcophagus - in the Grand Egyptian Museum, not far from the Pyramids and the Sphinx.  The museum isn’t finished yet - and has had a difficult birthing, given the changes in government - Mubarak, Morsi, el-Sissi - since its ground-breaking.  According to an Egyptian archaeologist friend, “the conservation center in the museum has been active since 2014 or even before”, and Tut’s collection has been moved “to the labs of the conservation center to be cleaned and restored with more advanced methods that brought more beauty to the items”.
For the first time, the entire collection will be on display in 2020 in one place:  at the very heart of the GEM in Giza.  And it will be the only place you will see anything of King Tut’s ever again.


P.S.  If you want a look at something else from Egypt, how about the Luxor Obelisk in the middle of the Place de la Concorde.  Napoleon brought it back from his marauding in that southern land.  The second obelisk was also given to the French back then, but remains on site in Luxor.  France magnanimously told Egypt it could stay there, that they gave up their ownership of it, probably because of the intricate and expensive logistics of bringing it to Paris.  They got lucky with the first one. 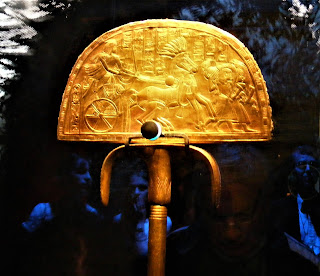