Out and About: Exhibits: Artists in Montmartre, from Steinlen to Satie 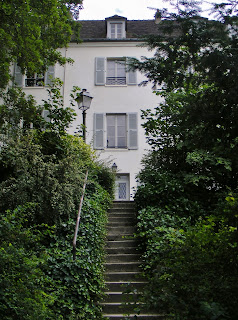 Sometimes, when you’ve lived in a place long enough, you think you know it.
And then you find out you don’t.
I’ve lived in Montmartre since 1970 - with a short interlude - and I know it well.  I’ve visited the Musée de Montmartre many, many times.  But it was a nice afternoon, with nothing else to do, so I decided to walk over (well, up and over and back down; it’s a steep hill) to see the current temporary exhibit: Artists in Montmartre: from Steinlen to Satie.  And to discover Suzanne Valadon’s artist studio.
The museum used to be small.  It had a tiny shop on Rue Cortot where you bought your tickets.  Later they added a bookshop across the flagstone path leading to the house.  And that was all there was. Just a small three-story house that used to be the country home - when the Butte Montmartre was far outside Paris - of famous actor Rosimonde, successor to Molière.  It was a museum that I could navigate with my eyes blindfolded.
(Anecdote:  Rosimonde died in the wings of the theater after starring in Le Malade Imaginaire, just as Molière had before him.  The name of that play means “the hypochondriac”, which is ironic to the utmost.  The year was 1686.  It’s an old house.)
All that has changed.  You still buy your tickets at the same place, but it’s bigger and sells books and cards and magnets, as do all Paris museums.  And now you enter the museum from the garden level, around the back of the house. 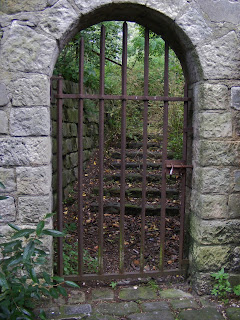 As the garden is open to the public, I decided to start there, exploring the many levels that spill down to where the Clos Montmartre starts - the last vineyard remaining within Paris proper. The garden is very much as it must have been in Rosimonde’s day, which is kind of exciting to a history geek like me, in and of itself.  But on the east side of the garden I discovered  a gate, and that gate leads to the St. Vincent Garden, or it would if you could open it.  More about that in another blog.  Suffice to say that for almost half a century this garden remained closed to the world since 1940.  Even now it’s locked tight except for two half-days a week... or for school science trips.  There are things living and growing in there that are found nowhere else in Paris any more.  (It’s presumed that the newts that appeared spontaneously in the new Jardin Renoir ornamental pond migrated from there.) 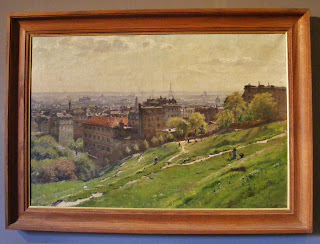 Inside the museum, the lower level of Rosimonde’s home is still for exhibits.  There are works by known artists and also a few new names.  One of the works by Alfred Renaudin shows Paris in 1899, as viewed from where the steps now lead up to the Sacré-Coeur.  (I have a copy of it in my home because for 27 years I lived right across from this hill and my windows opened out onto it.)  There’s also some artwork from the Shadow Theater of the famous Chat Noir cabaret, as well as old photos of Montmartre before the developers got their hands on it. 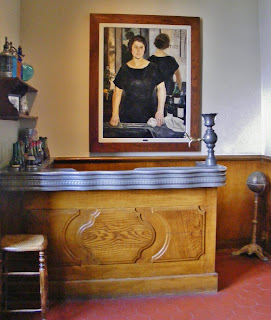 On the middle level is more art, and an actual bar that escaped from the Nazi requisitions, now tended by a portrait of Suzanne Valadon. The front of the bar is veined wood, the top is the quintessential zinc, and it comes equipped with a water dispenser for your anisette or absinthe, the Green Fairy that was the downfall of many an artist or poet.  Other rooms house a collection of porcelain and sheet music, along with a plaster cast of Montmartre from 1955.

So much for the old building, the Museum as it was for decades.  Now on to the “new” building.  To reach it, you exit where you used to enter Rosimonde’s house and cross a lawn with tables and chairs scattered around that ornamental pond with the migrated newts from an earlier era. You can sit and talk, or order coffee, tea, pastry, ice cream (in season) or light snacks from the Café Renoir.  (And yes, Renoir did have a studio here for a while.) 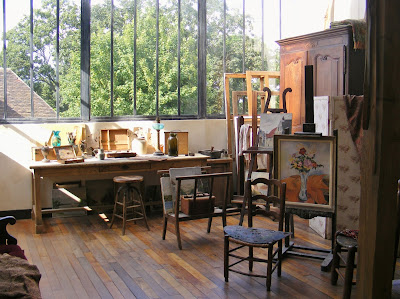 This other building is the Hôtel Demarne (which doesn’t mean a hotel, but rather a private home).  The house went with the now-locked gardens and stood vacant for decades, once it - and the garden - were turned over to the City of Paris in payment of past-due property taxes.  For a while it was used occasionally for meetings and private dinners, but now it has become part and parcel of the Museum. Which is wonderful because here is where Suzanne Valadon lived with her young lover-husband and her illustrious but fatally flawed artist-son Maurice Utrillo. 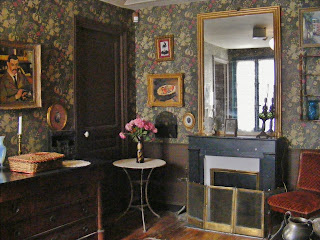 There is plenty of floor space for temporary exhibits; this one is Artists in Montmartre: 1870-1910.  But what fascinated me was the reconstituted apartments where Valadon lived, and especially her studio, filled with light (with a northern exposure, which was de rigeur).  The artifacts gathered here, whether hers or not, make it seem as if she just stepped out to the Rue St. Rustique one street over to buy some more colors or canvases.  (That shop is still there, the last art supplies shop on the Butte, but for how long?) 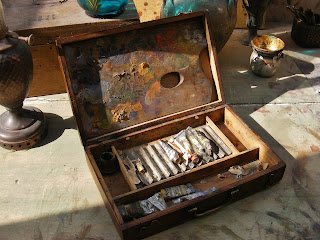 Montmartre would not be Montmartre without its artistic heritage. The fact that the City of Paris has handed this property over to the Musée de Montmartre, and that the museum has worked for years to preserve part of Montmartre’s heritage is a wonderful thing.
As the nearby Place du Tertre becomes increasingly handed over to the cafés, squeezing out the artists who once took up the entire square, it’s important that the Butte’s history as a place where artists lived and created be preserved.  The Musée de Montmartre has truly done that. 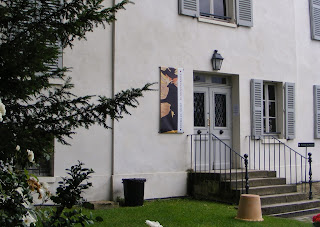