On the Road: High Tide at Mont Saint-Michel

Everyone has a certain number of special places in the world. Places that make the heart sing. Places where you stop and just soak it all in. Places you leave only with regret.
Mont Saint Michel is one such place for me.
And judging by the crowds, for many thousands of other people, too. Every day. 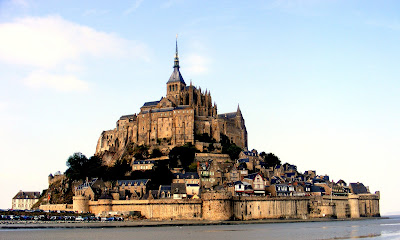 This fortress island is amazing for so many reasons. Its longevity - it’s been around, gradually, for over a thousand years. Its architecture - towering high above the seascape, seemingly defying the law of gravity. Its setting - in the nook of a great bay, surrounded by water at high tide. And although it’s beautiful any time of the year, it is particularly amazing when the highest tides of the year encircle this rocky citadel.

The particularity of the bay of Mont Saint Michel is that its seabed is fairly flat and so the mascaret glides in fast. On certain days of the year, the tide comes in almost at the speed of a galloping horse, or more scientifically at 12 km per hour (8 mph). They call it the mascaret; we would call it a tidal bore. I like the French better. It sounds like a dessert wine, as in "Would you like a glass of mascaret with your crème brûlée?"﻿
﻿

﻿
The flatness of the seabed also means that when the tide goes out, it goes waaaay out. And when the tide comes back in and reaches its highest point, the water is 15 m (50 ft) higher. Or deeper, whichever way you like to think of it.
For those of you who don’t understand tides, here’s a crash course. Tides are caused by gravity, much as an apple falls to the ground. The Moon exerts its gravity on Earth’s waters, and so does the Sun. When those two are aligned, the attraction adds up. That happens during a new moon or a full moon. And as the Earth revolves around the Sun once a year, there are two times each year when the Sun is over the Equator, which means it has a maximum attraction. If the Moon is also aligned with the Sun at that moment, you get "the tide of the century". All this means that each tide will have a different height, so scientists have devised a measuring coefficient which runs from 20 for the least high tide to 120 for the very highest.
That’s the height. Now for the speed. A tide is really a wave of water. So depending on the depth and topography of the seabed, the tide will come in faster or slower. At Mont Saint Michel, the tide comes in from the Atlantic Ocean. And as the bay’s seabed is fairly level, it meets little resistance. So it comes in as a visible line of water that is easy to see advancing.
So much for the science of it. But that doesn’t describe the amazing experience of watching the mascaret from the terrace at the top of the Abbey. It advances inexorably, and the fog horn calls out to warn those who are strolling across the sands. You might be able to outrun it, except for two things. First of all, as there are three streams that flow into the bay; they fill up first and might cut you off from land. 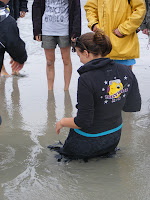 And then there’s the quicksand.
Sure, all that sand looks the same when you’re peering down at it. It even looks the same at eye level as you walk across it. But it isn’t. Only a few years ago, a horse and rider got trapped. The rider managed to jump off to safety and run for help. But it took a tractor and several people to pull the frantic horse out, its legs already almost totally swallowed up by the quicksand. And many are the pilgrims over the centuries who never made it to the Abbey. Which is why you only cross the bay at low tide with an experienced guide, often accompanied by a trusty Labrador retriever.
﻿﻿﻿﻿﻿﻿      I always try to time my visits to Mont Saint Michel with the high tides. There’s something magical about being cut off from land, except for that little two-lane road on the embankment (slated to disappear one day soon, returning the Mont to its original island status). Seen from the shore, it all looks so tenuous, a bit of rock sticking out of the sand, crowned with one of the greatest architectural wonders Man has ever achieved. 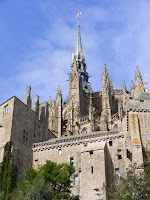 And a gilded archangel Michael looking down on it all, keeping watch.