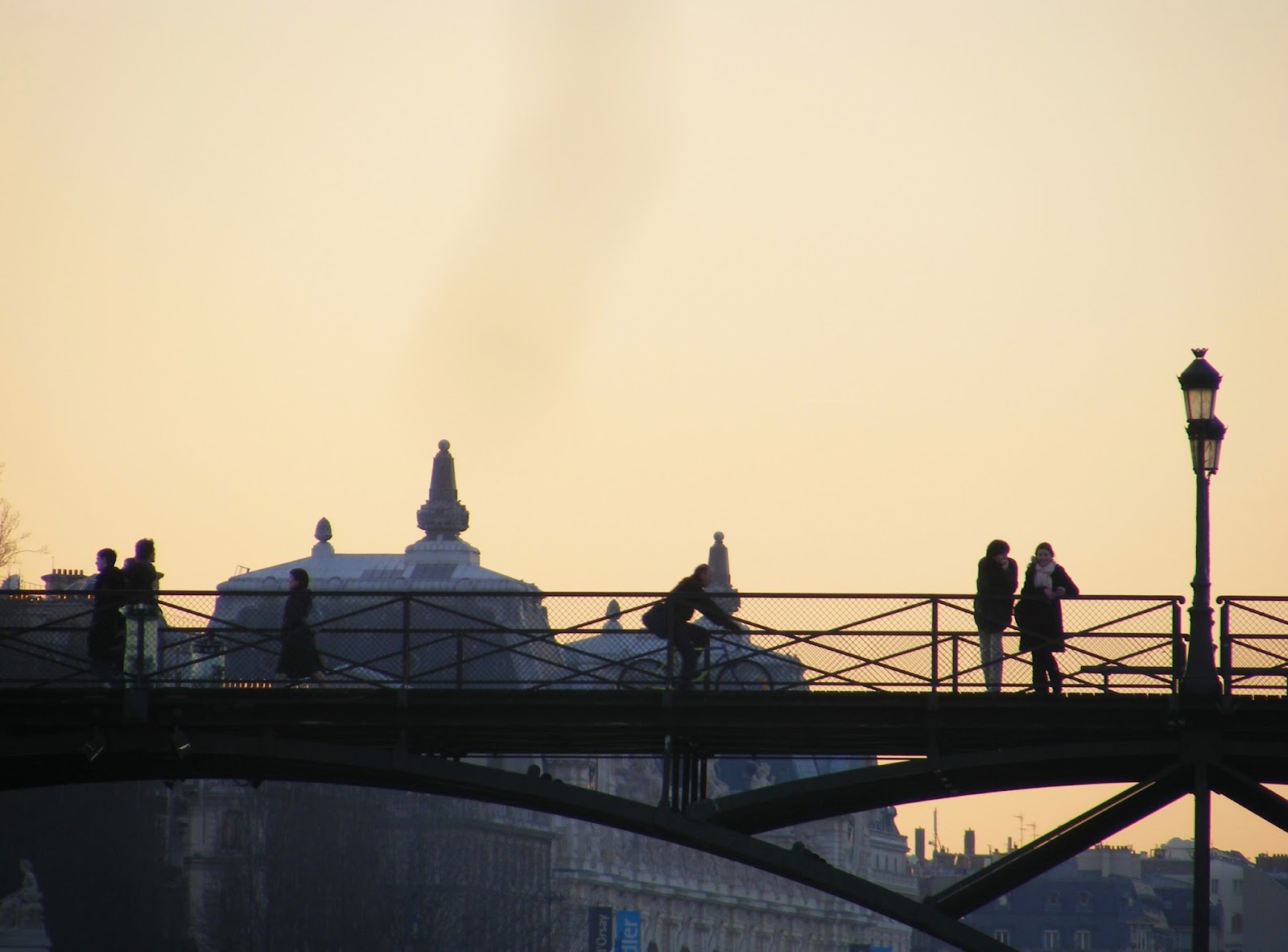 Paris started out as an island.  And whenever there's an island, sooner or later there's a bridge.
Paris has 37 in all, if you count just those spanning the River Seine.  There are others crossing the city’s canals.  And a few for roads that crisscross over each other.  Two of the river bridges were built for pedestrians only.  One, the last bridge built over the Seine, was inaugurated in 2006 and dedicated to French writer Simone de Beauvoir.
The other is the Pont des Arts.
Built under Napoleon Bonaparte in 1802, it links the Tuileries Gardens of the Louvre Palace, now a world-famous art museum, with what I think is the most beautiful building in Paris:  the Institut de France, where the Académie Française sits and ponders which words should be accepted into the French language and win a place in the dictionary. 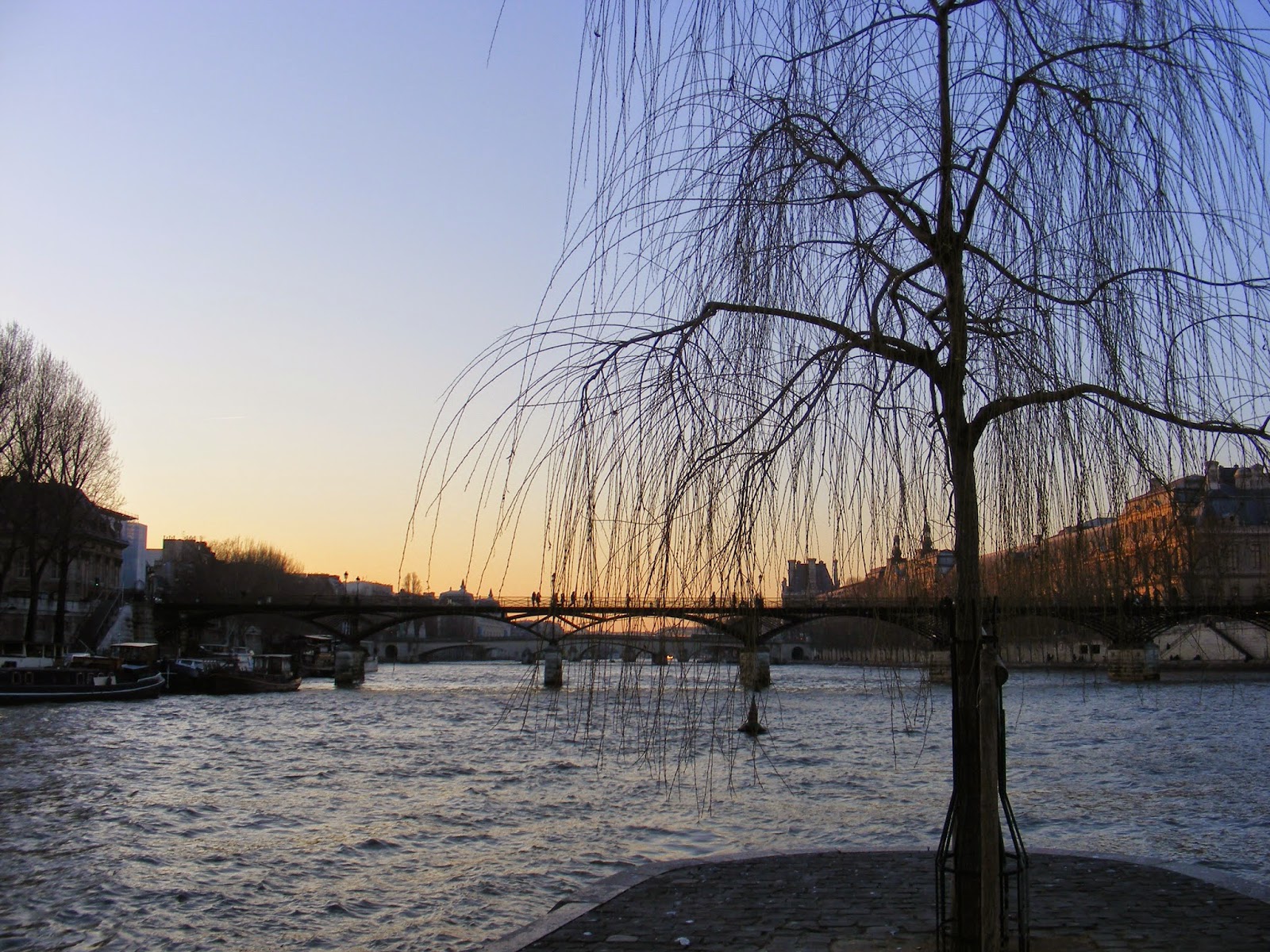 For almost two centuries, the lace-like Pont des Arts offered a haven of peace, open only to pedestrians and bicycles.  A place to stand and watch the river flow by to the sea.
Of course there have been the normal mishaps - normal for a bridge, at least.  There were two aerial bombardments in World Wars I and II.  And many, many collisions with boats, most notably in 1979 when a barge took out a whomping 60 meters of it (about 200 ft).
And so it was closed while repairs were made. The idea was to more or less rebuild it to the original design but with modern materials.  I say more or less because its nine arches were reduced to seven so that it would “match” its neighbor, the Pont-Neuf, which has seven.  (The French are big on symmetry.)  After five years of work, the bridge reopened in 1984.
Then someone made a movie. 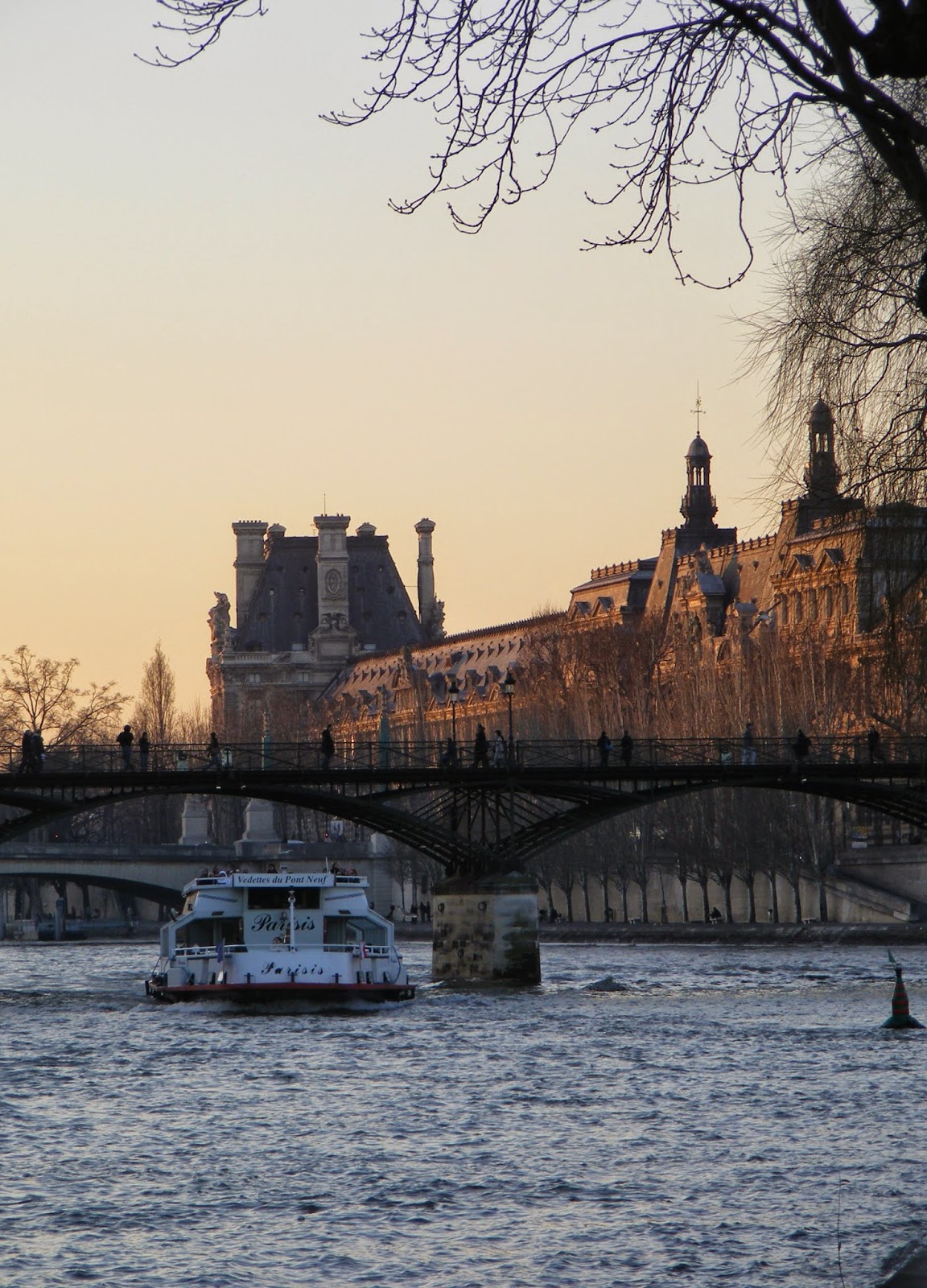 Ever since the 1991 film Les Amants du Pont-Neuf, lovers - whether Parisians or tourists - have been attaching a padlock to the bridge's railing and then throwing the key into the Seine below. If you don’t come equipped, you can buy one from the bouquinistes, the booksellers along the banks of the river. Somewhat like throwing three coins into the Trevi Fountain in Rome to ensure you’ll return to the Eternal City, throwing the padlock’s key into the Seine is supposed to declare and preserve your eternal love for each other.
I've never heard of anyone being injured by one of the keys falling on them from above, but cargo barges as well as many, many tour boats - the famous bateaux-mouches - cruise back and forth beneath it every day.
No, the real problem is that padlocks are heavy. And when the bridge's entire railing is chock-a-block full of them from one bank of the Seine to the other, and on both sides... well, that wasn't in the original specifications of this lightweight pedestrian bridge.  Nor those of its renovators either.
The City of Paris asked people not to do this any more.  They said the metal bridge could only bear so much weight.  Now they're asking lovers to tie ribbons instead, as a pledge of their undying love.  But when did lovers ever listen to anybody? 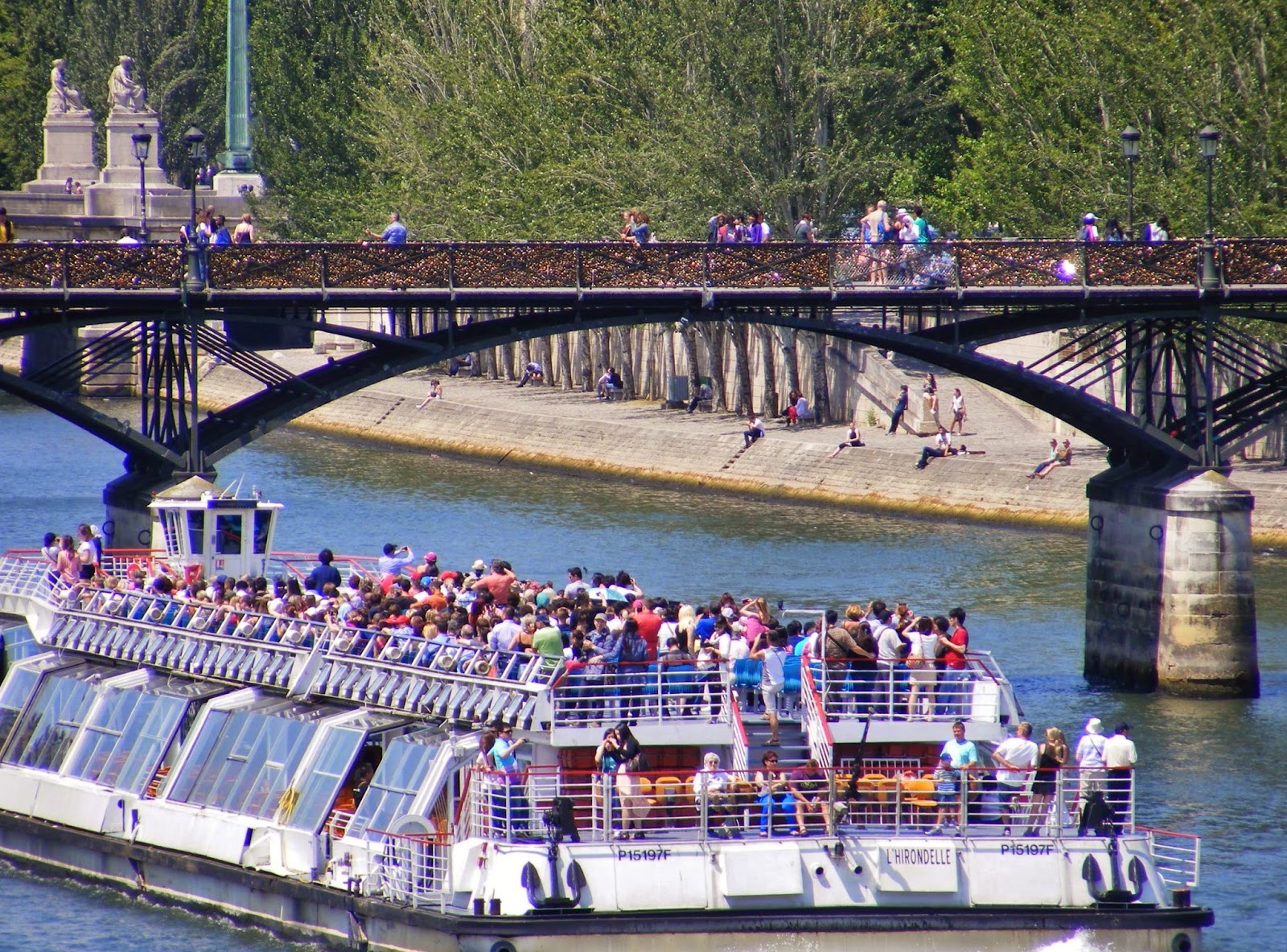 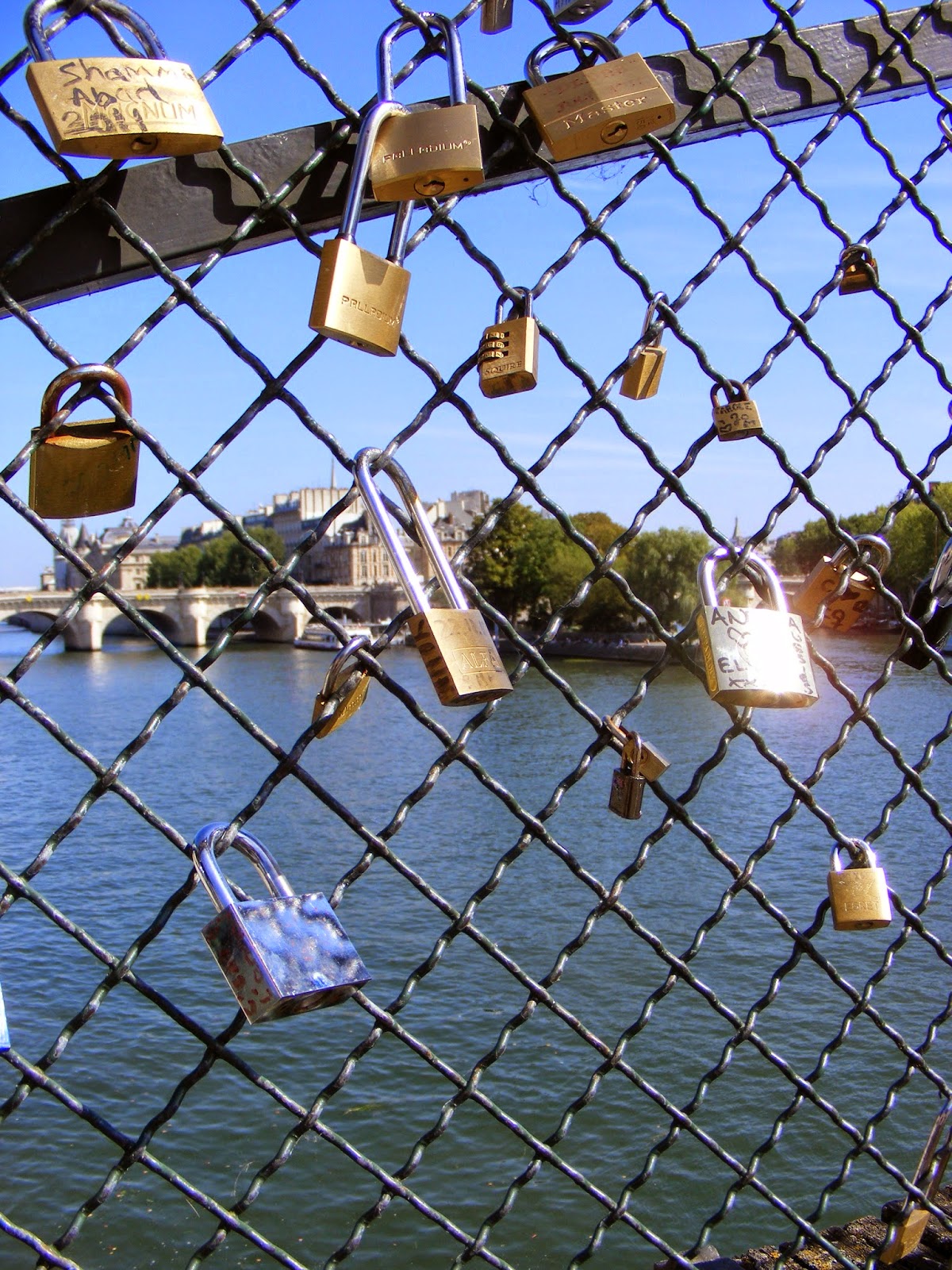 Fifteen years after the movie hit the Silver Screen, disaster hit the bridge.  And not in the form of yet another barge crashing into it.  No.  This time 2½ meters (8 ft) of railing collapsed under the weight of all those padlocks.  There was a preview of this kind of problem last summer when one small section gave way, but this was far more spectacular.
So the bridge is closed once again while city workers saw off all the eternal locks.  Lovers, please go elsewhere!
It'll be interesting to know how much all those love locks end up weighing.
And whether, as a result, there’ll be a rash of divorces around the globe. 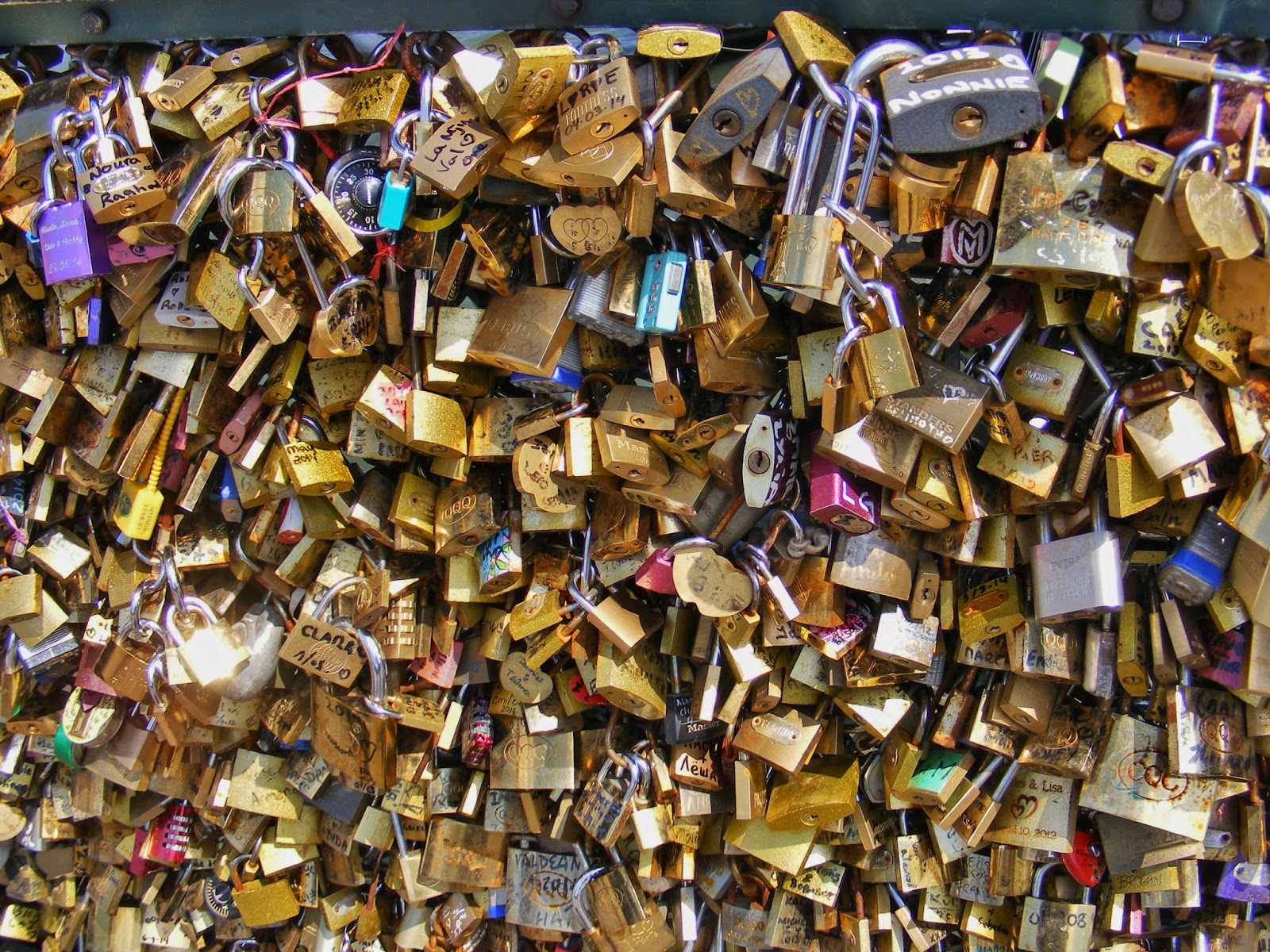 Now it's hard to find a place to put a new lock!  As you can see in the photo on the left, taken June 13, 2014.
The other photo shows the replaced section installed on Monday, already well on its way to being equally padlocked a short five days later.
The rapid appearance of the Love Locks isn't surprising, given there were six young men selling padlocks on the bridge itself on this sunny day. 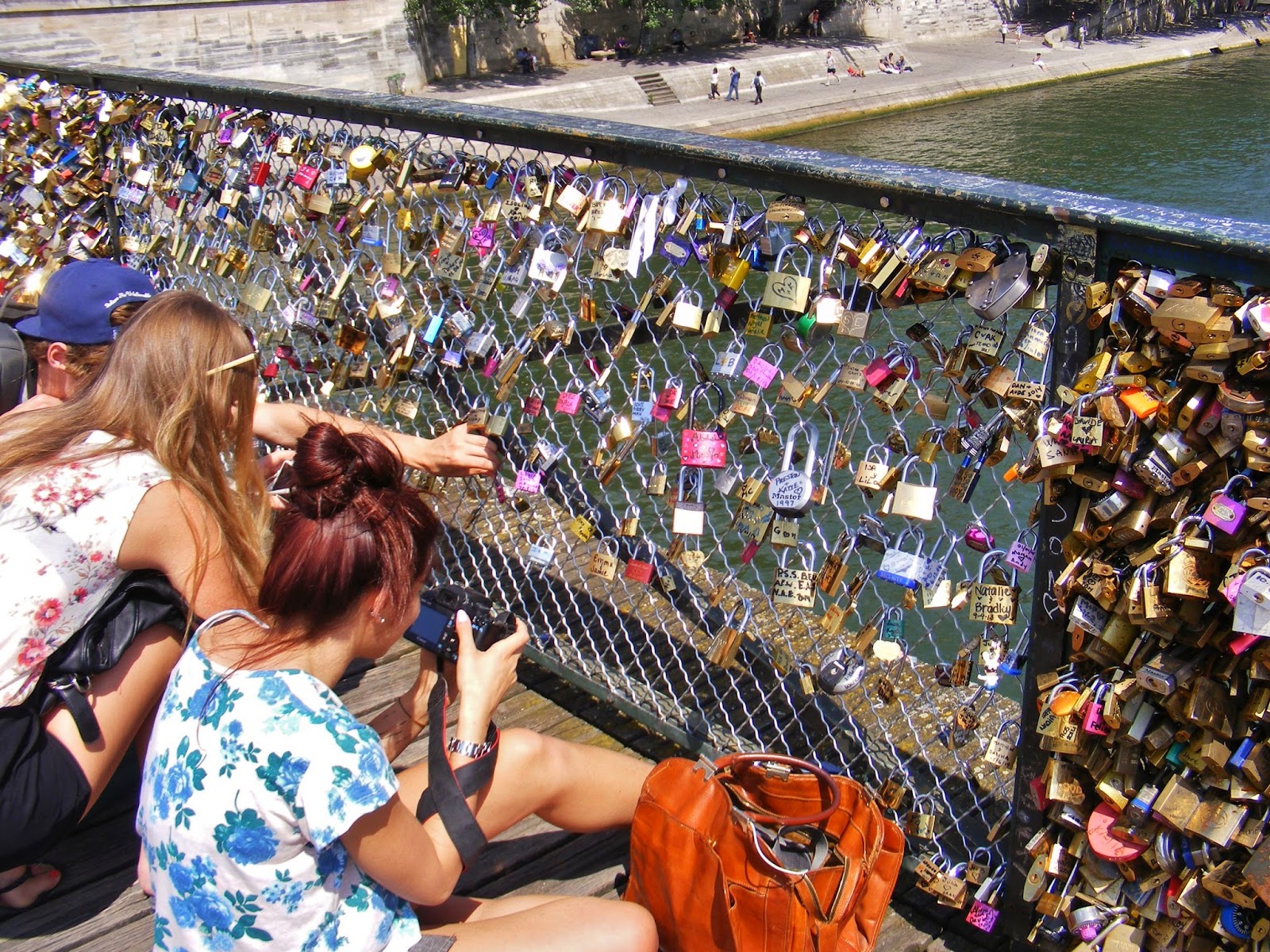