Recipe of the Month: Accras 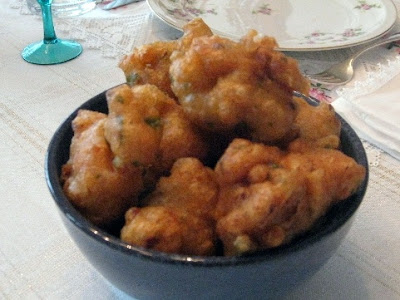 France is largely a Roman Catholic country, although most people don’t attend mass on a regular basis, except for Christmas and Easter... maybe.  It’s said a Frenchman attends church four times during a lifetime:  for his christening, first communion, wedding and funeral.
I usually recommend this recipe as an appetizer in February or early March, for Lent, as it's a fish recipe:  accras.
That also offers me an excuse for slipping in a recette antillaise, a West Indian recipe.  While the sun once never set on the British Empire, France was no slouch either in that category.  French colonies dotted the globe: Africa, the Far East, eastern Canada, many Pacific islands... and even French Guyana in South America as well as several islands in the Caribbean.  My personal link, through the family of my children and my ex, is to Martinique.  Madinina - the Island of Flowers - as it was called in the Carib language of its inhabitants when Christopher Columbus “discovered” it in 1502.
There are many typical créole recipes, and accras is one that has crossed over to many French plates and palates, provided there’s not too much piment (hot pepper).  Although it's a traditional appetizer made with salt cod - it’s a poor man’s dish - famous chefs now often replace the cod with crabmeat.  I love crab, but I find it far too bland to stand up to the other ingredients.  So let’s stick with the classics.
Accras are small puffs, so the cod must be shredded rather than cut into hunks. Shredding also releases more taste.  Fingernails come in handy here.  Be sure to weed out any skin, bones or “stringy  bits”.  Another heads-up:  you might want to wear rubber gloves to cut the chili pepper because if you get it on your hands and then touch your eyes, it’ll really burn!  And for the parsley, a Frenchwoman taught me to place the leaves in a jelly glass and snip them with scissors until they’re minced; I find this so much easier than using a knife and cutting board.  Lastly, remember that, although you’ve soaked the cod, it was salt cod to begin with, so go sparingly with the salt shaker.
So here’s the recipe, as dictated to me by my ex - who’s a West Indian chef par excellence.  Enjoy this bit of Caribbean sunshine, with or without a side of rum.


- Soak the cod overnight, changing the water twice.
- Shred the cod into very small pieces, removing any bones and skin.
- Mince the onion, scallions, and garlic, as well as the parsley.
- Remove the stem and seeds from the chili pepper and mince it.  (You could use 1-2 tsp of chili paste instead.)
- Sift the flour into a large mixing bowl.  Mix in the cod, onion, garlic and scallions.
- Add the chili pepper and parsley.
- Mix in the yeast, baking soda and egg.  Salt and pepper to taste.
- Gradually add water until the batter has the consistency of a thick pancake batter (about 1½ c) and mix until smooth.
- Cover and let the batter rest for a few hours.
- Carefully slip teaspoons of batter into very hot oil and cook until the accras are golden.
- Drain on paper towels.
Serve hot.  For 6-8 servings

You can make the accras ahead of time, and then reheat them in the oven (450° for 5 min), but I think they taste better  - and especially crisper - if you eat them right away.