In a very chic neighborhood just north of the Champs-Elysées and south of the Parc Monceau is a late-19th century home that once belonged to a very rich family. 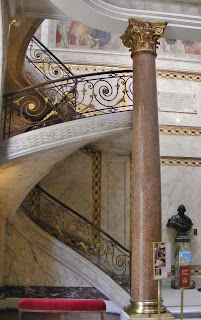 What is now the Musée Jacquemart-André was once a home built at the request of Edouard André, art collector and descendant of an old Protestant family (a minority in Roman Catholic France) who struck it rich - very rich - under the Second Empire.  André wanted a mansion with all the modern conveniences and decorated as if it were a theater set.  And that’s what he got.  (The Jacquemart part of the name comes from his wife Nélie, a budding artist.)
After the death of both Edouard in 1894 and Nélie in 1912, the residence was handed over to the Institut de France (created by Cardinal Mazarin in 1661) for the purpose of becoming a museum so all the world could admire their art collection as they and their guests once did.
In addition to a tour of the house, which is still furnished and decorated as it was when it was their home, there are now temporary art exhibits in a part of the upstairs.  The one showing now is “The Impressionists in Normandy”.

During the late 19th century, just as the Impressionists were rewriting the precepts of what art is, Normandy became a vacation spot.  Spurred by the British, who seemed to enjoy bathing in the cold waters of the English Channel, this coastal region northwest of Paris became very much in vogue.  Many artists chose it as a setting for their easels, starting with Boudin and including Courbet, Degas, Monet, Morisot, Pissarro and Gauguin for the French, Jongkind for the Dutch and Turner for the British.  Over fifty works by these artists - their impressions of Normandy - are on display on the upstairs level of the Jacquemart-André home. 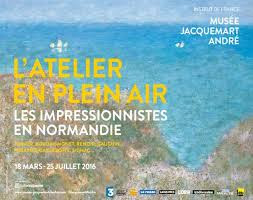 The exhibit provides excellent explanations on panels in the various rooms.  Unfortunately they are only in French.  But you can get an audioguide in English - or other languages - as you enter.   The panels and audio commentary give a background of the Impressionist movement and walk you through the various works.
The first room has a wonderful canvas by Claude Monet, one of my favorites, but I admit a weakness for Monet.  It’s called La Charrette (The Wagon), and shows a horse and cart disappearing down a snowy lane past two typically Norman-style houses.  The sky is that thick, sodden off-white that anyone from cold climes will recognize as promising more snow.  Its snowy landscape foreshadows one of my all-time favorites of the artist, painted four or five years later:  The Magpie, with the bird perched on a gate in another snowy, but more sunlit Norman landscape.  Both are usually at the Musée d’Orsay, another favorite of Impressionism lovers.
The second and third rooms focus on the Normandy beaches and all their social activities:  swimming and boating, but mostly people walking along the boardwalks of Deauville or Trouville, or women sitting in the sun under a parasol.  There’s also one of Degas’s first paintings of a horse race, and a Caillebotte from the Toledo Museum of Art:  Regatta at Trouville.  The fourth and fifth rooms contain views of several ports, and especially a Gauguin canvas of Dieppe on loan from Manchester, England, and a marvelously simple seascape with startling blue water by Berthe Morisot that usually lives in the Virginia Museum of Fine Arts.  There’s also a second Morisot, a view of the port of Cherbourg, on loan from Yale.
In the last rooms are a duo of Monets, hung side by side, and they’re very different from what one usually expects from that artist.  They are both fishing boats and from the 1860s, but drawn in the Japanese style, with a flat stroke and bold black outlines.  They have never been seen together before, especially as one is from a private collection and the other from a museum in Bucharest, Romania.
With all these different museums represented, plus pieces from Germany and a Turner from the Ashmolean Museum in Oxford, England, this is truly a wonderfully international collection of masterpieces.  The Impressionists may have painted side by side along the Normandy Coast as the 19th century drew to a close, but you will never see these canvases together in one place again.  Well worth the time to drop by the Jacquemart-André Museum if you’re in Paris.