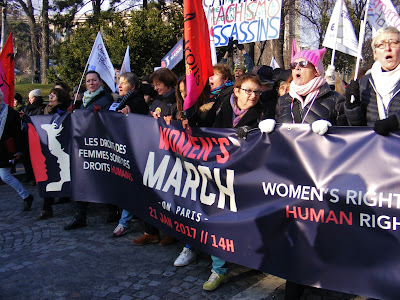 During the Vietnam War, I was in college.  There were lots of demonstrations there at University of Michigan - remember SDS* and Tom Hayden? - but my parents were footing the bill, so I didn’t really feel I could join in.  Blame my upbringing.
And I never burned my bra with the Women’s Libbers, although I lived my life on my own terms, post-BA degree (and maybe even a bit pre- as well).
As a matter of fact, I think the only time I went to a real demonstration was in Paris in the 1970s or 80s on the Champs-Elysées, in support of a Russian writer whom the Soviet Union was persecuting.  But it was more of a simple protest.  Small but heavily guarded.
Nothing like today in Paris for the Women’s March.  No, today was a full-fledged demonstration.  It was not small.  And it was not heavily guarded.  We had a low-profile police escort opening the way and closing it, more for traffic than for crowd control.  No casseurs, no breaking or looting.  No violence of any sort. The route - about two miles in all - started from the Place du Trocadéro, wound around the perimeter of the park, headed down to the Seine, across to the Eiffel Tower, then around that park to the far side and ending in front of the Ecole Militaire.  (Maybe parks are off-limits whereas the streets belong to everyone, something that was chanted during the march.) To get to the “starting line”, I took the bus.  As I got on, I asked the driver if he could go the whole way to Trocadéro, and he replied that, yes, it wasn’t closed off... yet.
When I got there, the crowd was already sizeable.  Some men but mostly women.  Quite a few women in hijabs, Muslims marching against hatred toward Islam.  There were all races - white, black, red, yellow and those in between who are “all of the above”.  All ages, from grey-hairs to teenagers, and some parents with small children riding on their shoulders. 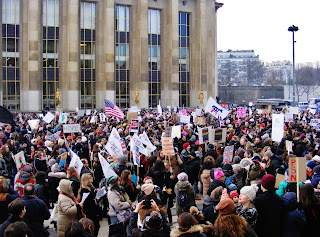 To take a photo of the crowd, I tried to climb up higher, but the wall wasn’t built for that.  A young man - French, probably in his late 20s.- was already up there.  He held his hand down to help the old lady make it to the top.  That kind of solidarity - across nationalities, races, religions and ages - turned out to be the the main theme of the day.

After clambering down again, I walked around, talking to people I'd never met before.  Everyone was still in the “milling” stage, wondering when the march would start.  I talked to two older women, long-time friends, one an American, the other French, both living in Paris.  Both just kept saying they never thought the country - America - would have to fight these same fights again.  And hoped it wouldn’t happen in France in the Spring presidential election.  It’s another theme that kept coming up, no matter who I talked to. 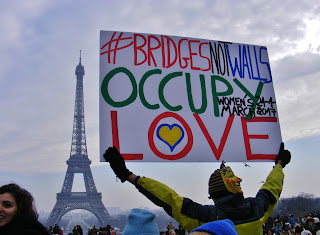 There was a middle-aged couple behind me as I made my way toward the front of the crowd.  They were chanting loudly any chant that came along.  Out of curiosity at their accent, I asked them where they were from.  “South Africa,” they replied.  They said they knew about inequality, and I’m sure they did.  They weren’t a mixed-race couple, but there were many in the crowd.
There were lots and lots of chants, led by individual factions, such as the pro-choice people who sometimes chanted in French Mon corps / Mon choix and sometimes in English “My body / My choice”.  The young people on the heights preferred a chant the Obamas made famous:  “They go low / We go high”.  There was the requisite hey-hey chant, in this case “Hey hey, ho ho, Donald Trump has got to go”.  And of course the insult to Donald’s small hands: “Take your hands off my rights”.  There were the Solidarnosc veterans: Sol- Sol- Solidarité / avec les femmes du monde entier (Solidarity with women everywhere), and the veterans put their whole hearts into that one.  I preferred one with a similar message, but more catchy in a multi-ethnic way: “No hate / No fear / Everybody’s welcome here”.  But the one heard most frequently - and the loudest - was definitely “NOT MY PRESIDENT!”
There were also signs.  Lots and lots and lots of signs.  Here is a non-exhaustive list: 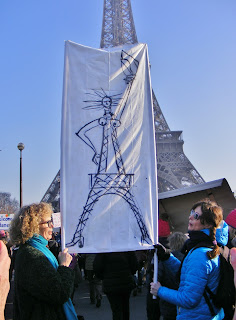 Ethics matter
Listen to science
Dump Trump
Trump’s a 3 at best
Impeach the Creep
Women’s rights are human rights
Stronger than fear
If you’re not horrified, you’re not paying attention
Big ovaries trump small hands
I will not be silenced
There is no Planet B
... and my personal favorite:
OMG
USA
WTF

It was the signs that offered me my personal take-away memory of the march.  About a third of the way along the route, before we reached the Seine and the Eiffel Tower beyond, I spotted a women trying to hold up a sign made out of cardboard that just wouldn’t stand up straight.  It kept bending in half, hiding the message, and she was trying to hold up both ends and keep an eye on three middle-school-ish girls, one of whom reminded me of my daughter at that age.  Same hair; so probably same heritage.  I told the woman I’d hold the other end of the sign if she wanted. And we spent the rest of the march together.
As we went along, she said, almost to herself, that her employer wouldn’t be happy if he knew she were here.  When I asked her who she worked for, she literally whispered “The Embassy” (American, of course).  So in case Big Brother truly is watching, we won’t call her by her real name.  Let’s call her Jacqueline. 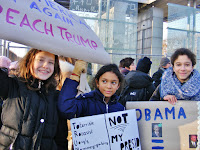 I ended up walking right behind the girls, who became even more enthusiastic as the march continued.  “It’s their first demonstration,” Jacqueline explained.  Some how I think there may be many more in the future.
In the absence of the brass ensemble + drums lost somewhere in the middle of the crowd stretching back over blocks and blocks, far enough to be out of earshot, someone in the very front row, someone with the sound system, started an a capella version of We Shall Overcome as we reached the Seine River, with the Eiffel Tower as a backdrop.  It not only took me back to the Civil Rights Era, but brought tears to my eyes to hear all these people from different countries singing together and knowing the words: we’ll walk hand in hand, we shall live in peace, we are not afraid.  Even the young girls caught on, more or less. Behind me stood a tall man with grey hair and a beard, singing in a powerful voice.  He knew the song well... and turned out to be French.  It was that kind of day. The chanting continued all along the avenues, right up to the square at the far end of the Eiffel Tower, from where you could see our starting point in the distance.  I gave Jacqueline my e-mail address and asked her to send me some photos.  And as the crowd started to break up, headed for the Métro and our respective ordinary lives - maybe not so ordinary after all - I asked one of the CRS - riot police once known for having la matraque facile (being heavy-handed with the billy-club) but today just peaceful escorts - how many people he thought had attended.  He told me 3,000 to 4,000 “but we were only at the end”.  I told him there were about as many in the front half.  Final figures came in around 7,000.  Not bad for a place known for la belle vie, the good life, all wine, champagne and Cordon Bleu.
Until you touch Les Droits de l’homme et du Citoyen (The Rights of Man and Citizens) as covered in a universal declaration written in 1789 by the new government after the French Revolution.
Then it’s a whole other ballgame. 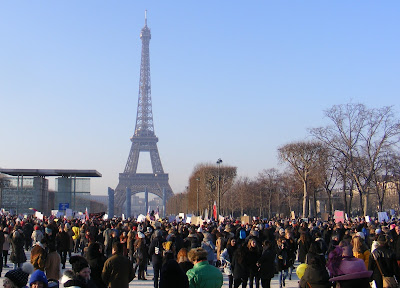 
* “SDS held its first meeting in 1960 on the University of Michigan campus at Ann Arbor, Michigan, where Alan Haber was elected president. Its political manifesto, known as the Port Huron Statement, was adopted at the organization's first convention in 1962, based on an earlier draft by staff member Tom Hayden.” - Wikipedia.  (And Haber’s still at it; I know his French wife well.)