Out & About: Exhibits: Balenciaga: Working in Black 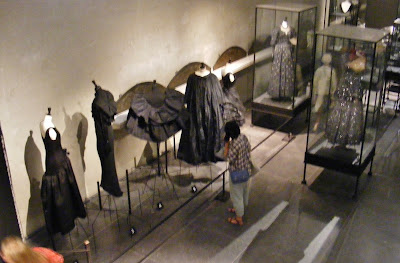 In addition to food and art, another thing Paris is famous for is fashion.
One of the leading fashion designers of my youth was Balenciaga, whose dresses were delicious works of art, alongside those of Schiaparelli.  So the exhibit at the Bourdelle Museum was a must for me. 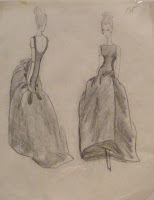 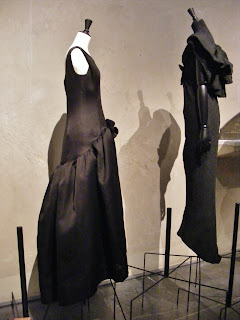 When I get to the Bourdelle Museum, I find out just how much I did not know about Balenciaga. For instance, I thought he was French, but no.  Cristobal Balenciaga (1895-1972) was Basque, from the Spanish side of the border.  Learning from his seamstress mother as of childhood, he went on to apprentice as a tailor before opening his own fashion house.  Given his tailor’s training, he was able to design, cut and sew his creations himself, one of the few couturiers who could take a dress from the drawing board to the runway all by himself.  His clientele grew to include Spain’s royal family, but when the Spanish Civil War broke out, Balenciaga closed his fashion house and moved to Paris, where he became pretty much an overnight success. 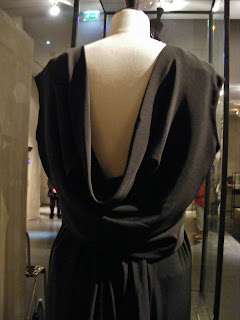 Christian Dior called him “the master of us all”, which is high praise from someone most people saw as being the master himself. To Coco Chanel, he was "the only couturier in the truest sense of the word.  The others are simply fashion designers."  And to everyone, Balenciaga was known for his uncompromising standards.
His creations were always sculptures.  At the start of the 1950's, he drew women’s shoulders wider and did away with the waist.  Then in the mid-Fifties he moved on to the tunic dress, followed closely by the chemise dress.  His looks were many, as the exhibit points out: “the barrel line (1947), the balloon (1950), the semi-fitted (1951), the tunic dress (1955), and, of course, the sack dress (1957)”.  By the end of the Fifties, he had switched his look to Empire waistline dresses and kimono-style coats.
Balenciaga not only created his own style; he mentored a whole generation of rising designers, the most famous of which were Givenchy, Courreges, Ungaro and Oscar de la Renta.  In addition to his European clientele, his creations attracted attention across the Atlantic.  Audrey Hepburn, Grace Kelly, Ava Gardner and First Lady Jackie Kennedy, among others, were all faithful to Balenciaga. 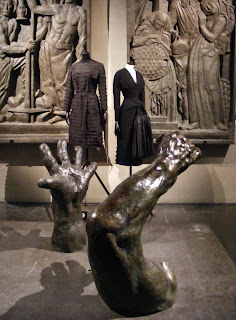 This exhibit focuses on his version of Chanel’s proverbial “little black dress”, in all its various forms.  He played on the opposition of matte black, as in wools and velvets, and the “brilliant black” of satin, silk or taffeta.  As one exhibit panel explains, “He used black textures to accentuate the play of shadows and to emphasise the line.”  To that he added accents with embroidery - perhaps borrowed from the “suit of light” of the matadors - or with sequins, paillettes and jet beads.
Another of the couturier’s tricks was how he used the fabric, how he shaped and cut it.  “In order to get the best out of a fabric, Balenciaga would adapt his technique to its qualities.  According to its weight, its thickness, its hang and its feel, he would cut it or mould it or drape it differently.” 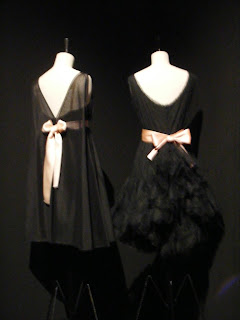 Even when he used other colors, black was part of the formula.  At one point Balenciaga designed dresses of bright pink cloth visible only as an accent through the black lace overlay.  The lace was reminiscent of Spanish mantillas. As for the pink, sometimes it was gentle, almost flesh-toned, sometimes the bright color of a toreador’s cape.
It must be remembered that there is black galore in Balenciaga’s native Spain.  Perhaps it was seeing all the widows, sometimes condemned to wear only black as of an early age, that led him to experiment with that “color”.
As the exhibit explains, “...for Balenciaga, black was more than a colour or even a non-colour; he saw it as a vibrant matter, by turns opaque or transparent, matte or shiny – a dazzling interplay of light, which owes as much to the luxurious quality of the fabrics as to the apparent simplicity of his cut.  A lace highlight, an embroidered composition, some twisted metallic tape, a thick drape of silk velvet and, presto, you have a skirt, a bolero, a mantilla, a cape reinvented as a coat, a coat tailored as a cape.”
The exhibit is broken down into three sections: “Silhouette & Volumes”, followed by “Noirs & Lumières” (Black & Light), and then “Noirs et Couleurs” (‘Blacks & Colours’).   In total there are over one hundred pieces from the Galliera Museum and Maison Balenciaga:  day clothes, suits, jackets, evening outfits, cocktail dresses and accessories.  All in black. 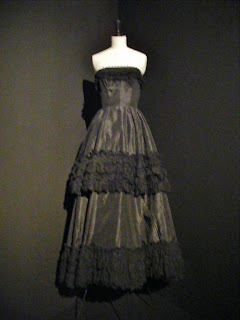 Initially, I found it a bit perplexing why these dresses were being shown at the Bourdelle Museum.  I mean, yes, Balenciaga was called the sculptor of haute couture so I guess that was the link with the sculpture of Bourdelle.  But once I got there and saw the dresses next to Bourdelle’s plaster casts in the museum’s Great Hall, and even a few in his atelier, it turned out to be a brilliant idea.
My only regret:  the dim lighting.  Especially for the black dresses set against a black background.  Obviously it’s necessary to protect these works of fashion art, and harsh lighting is not kind.  But black doesn’t show up well in the shadows.  Perhaps they could pump up the luminosity just a bit.
With that one caveat, if you enjoy fashion, this is a show for you.