It all started with a friend of a friend contacting me with a strange request:  to track down a French ancestor who had been dead for over 200 years.
She’d been told I live part-time in France and thought that, being on-site, I might have more luck than she’d had from across the Atlantic.
So Linda handed over all the paperwork she had, which seemed promising.  Date of birth  of this French soldier come to help America win its independence... but not place of birth.  Names of officers the ancestor had served with in the French troops, regiment number, battles he fought in...
Yet other points were problematic, mainly the three different family names he gave, and which only shared their first letter:  D.


So on a bright day in late May, I take the Métro to the Château de Vincennes on the outskirts of Paris*.  In a surprisingly short time for France’s top-heavy administration - literally overnight - I’d been e-mailed a “reader’s number” by the Ministry of Defense.  It will allow me free access to their military archives which are stored in the Louis XIV Library.
In the courtyard of the Château complex, an official asks me where I’m headed, and I learn that the Château has been on Orange Alert every since the Charlie Hebdo terrorist attacks last January (2015, in which I lost someone I once knew as a fellow PTA person, the parent of someone my children played with way back when).  Tourists are welcome in the 14th century castle and chapel administered by the Ministry of Culture, but are closely watched if they walk beyond there.  I’m headed well beyond, to the King’s Pavilion where the Archives are located, and which is governed by the Ministry of Defense.
After filling out a registration sheet and having my photo taken, I’m given a snazzy plastified card valid for one year.  Then I’m required to store all my stuff.  And I do mean “all”.   You put a one euro coin into the slot of a locker and lock up your coat, any sweater with big pockets, your purse, any bags... even take the case off your camera.  Anywhere you could hide a purloined document.  Only loose sheets of paper are allowed beyond this point - or laptops, without their case.  And only pencils, no pens.  No exceptions.  This is the universe of the military. 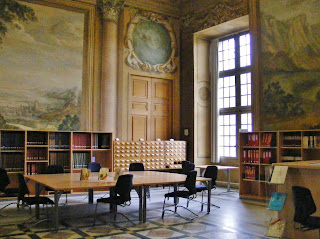 Up two flights of wide stone stairs (remember:  it was the King’s Pavilion after all), I enter a magnificent room with classic paintings on all walls, marble columns and huge timber beams overhead.  Plus a card catalog.  (When was the last time you saw one of those?)  I explain what I’m there for and am told to take a seat until the chief research librarian is free.
And that’s where I get lucky.  Really lucky. 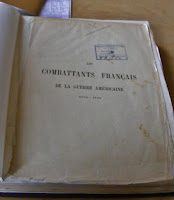 There is a colonel here today who specializes in the French troops who fought in the American Revolution.  I’m ushered into the Reading Room - complete with chandeliers - and introduced.   The colonel is mildly curious about my quest and shows me where to start.  Which turns out to be... the same book Linda consulted back in the States!
So ends Day 1, because I have to go pick up my long-awaited carte de séjour**. 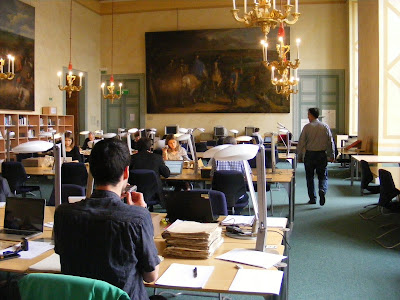 As the colonel told  me he won’t be around next week, I decide to go back the very next day and pick his brain some more.  Luck has placed him on my path.  That’s not an opportunity to be sneezed at.
And there he is.  I sit down next to him, and we whisper a while about how to go about this quest.  He asks many interested questions and concludes that the dates for Soldier Charles don’t add up.  I explain Charles was over 80 when he provided this information in order to get a war pension from the American Government.  With a bit more information from me, the colonel admits that the details do make sense - the march from the landing site in Newport, Rhode Island, down to the final battle against Cornwallis in Yorktown.  But he’s adamant that no one served in both the first tour of duty with Count d’Estaing in Savannah and then a second tour of duty to fight alongside General Rochambeau of Lafayette’s troops. 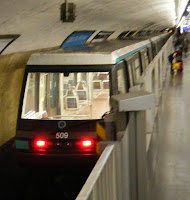 I get through half of the lengthy two-hundred-year-old army list, one name after the other, but it’s Friday and the Archives close at 4 pm (where have the two hours gone?!).  And that’s 1600 hours, not one minute more, in true military style.  At least that way I’ll miss rush hour in the Métro.

I go back several times, and see the progress on restoration of the courtyard's old paving stones.  I get some trails that don’t lead much further.  The colonel has given me his daughter’s e-mail address - he doesn’t do e-mail - and says I can contact him... which I do.  And he replies, providing additional information.
But it doesn’t pan out.  We’ve hit a wall.  Which I guess isn’t surprising more than 200 years later.  If I had but world enough and time... as the poem says.  But I don’t.  It’s time to return to the States.
I provide my meager gleanings to Linda back in Michigan and say I can perhaps do more.  But she’s merciful and says that information is fine.
Before I leave, I thank her for the opportunity to see something I would never have seen otherwise.  It’s been quite an experience. 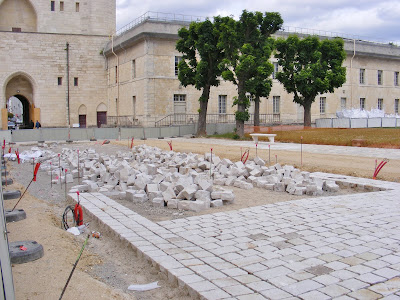