Of birds and basil 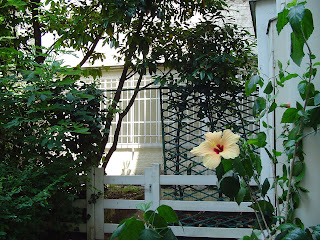 I was awake before the birds this morning... again. No particular reason. But when the sun came up, the birds started to sing. Especially the sparrows. 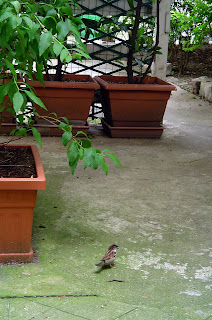 They’ve got me pegged now, as a pigeon (pun intended). Especially one of them, who looks so small he (she?) must be from this year’s nest. He flutters down from the tree and hops around in front of my door until I notice him and feed him. He doesn’t like breadcrumbs but luckily I have some seed left over and he eats that. Then suddenly the merle chanteur (the Beatle’s "blackbird singing in the dead of night") scuttles in under my white fence - the border between my garden and the common courtyard - and heads for the sparrow. Usually a sparrow would fly off, being so much smaller, but mine doesn’t seem to mind. (Of course, he’s not afraid of me either.) So I lob some breadcrumbs over the sparrow’s head into the back court (it’s the French Open, remember?). The merle snatches up a beakful and flies off. In a few minutes, he’s back, so we run The Sequel and he flies off again. Then I’m out of bread, so I close the door and make myself some breakfast. A girl’s gotta eat, too.
The drought continues in France. It’s wonderful to have these blue skies and nice warm temperatures in Paris: 57° min/70° max... a bit colder than Sunday and yesterday. But now 44 départements (out of 96) are suffering from drought conditions and water restrictions! There’s been absolutely not one drop of rain in Brittany for two months, which is three times less than normal. But so far farmers there have been allowed to irrigate their crops. That ends today. And even if it starts raining now, meteorologists say that won’t fill the water table because any rain that falls will be immediately soaked up by the plants, crops and trees. This hasn’t happened since 1976, and this year is expected to be even worse. 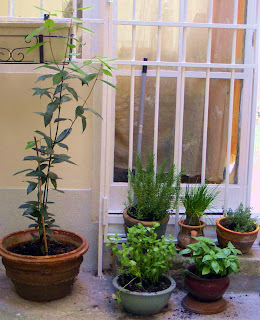 The highlight of the day? Not buying the railroad tickets for the Loire tour, although they came out surprisingly cheap. No, it was the simili-pesto I made for my capellini at lunch. Remember how I bought all these herbs to plant and then took off for Provence? Well, orders were to water them, but hey... So some aren’t too happy, like the sage and the parsley... and the basil. I watered them all as soon as I got back, but to no avail. So today I decide to cut the fading half off and cut it up as small as I could and crush up some garlic to go with it. I have only parmesan, no asiago and no pine nuts - and more importantly no food processor or mortar and pestle to mush it together in - but I have some killer olive oil direct from the mill down near Aix-en-Provence. So I heat it all up a bit to infuse the basil and garlic into the oil a bit and... BINGO! Not half bad.
There’s something to be said for being in the heart of Paris and cooking with your own herbs from your own garden.