It's official! Montmartre has the best baguette in Paris

Well, I may have to begrudgingly thank all the yuppy BoBo (Bourgeois Bohemians) for this because, although they've ruined the neighborhood for the Common Mortal in other ways, their money has attracted good bread.  I'm glad to finally be able once again to find the kind of bread you found everywhere when I arrived in Paris in 1968. During the time between then and now, no one wanted to work baker's hours so the kneading etc. was taken over either by North Africans, who are hard-working but didn't bake from the same recipe, or by central factories that sent dough out to local bakeries:  white, tasteless stuff full of air that would go hard in a heartbeat.
And the news gets even better:  This is only one of my local options for a good baguette.  There are two others.  And each is different.
Oh yes, I almost forgot:  they also do specialty breads; again, each is different.

A Parisian experience
Even if you already knew that the French take their food seriously, you have no idea how important this official competition is is; organised by the Paris city council, the winner becomes the official supplier to the President himself for a year! This year a boulangerie from Montmartre Au Levain d’Antan had won. We tell you how to get some of that oven baked crusty goodness for yourself … 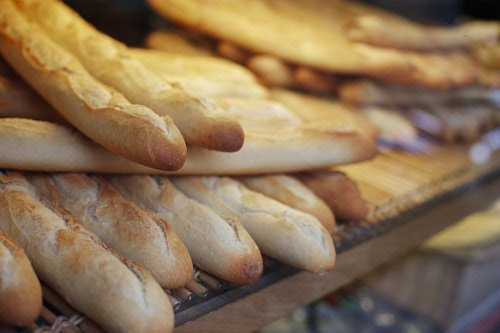 photo by Mark Thomas used under cc licence
Even with venerable baker Poilâne near La Belle Juliette and ultra stylish Eric Kayser and his very special breads to be found all over the Left Bank, our part of town doesn’t seem to have much luck with the great French classic, la baguette. For the last four years, the winners of the official prize have all come from the Montmartre area. Bah! Perhaps it’s something in the water

So, this year, Pascal Barillon from the boulangerie Au Levain d’Antan (here) was chosen from 174 contestants, of which 20% were instantly disqualified for having too much salt (max. 18g), being of incorrect length (baguettes must be between 55cm and 70cm) or not being the right weight (between 240g and 310g). I told you this was serious. And with 136 baguettes left in the running, competition was tough.