Excuse me, please. My purse is ringing.

This is an article I wrote in 1998 for a column I had for a while in a Michigan newspaper.  The figures obviously would need updating, and maybe America has caught up with France in cell phone use, although I think the U.S. moved on to the iPhone now, and I feel that's a different animal from the cell phone.  But the stories will still ring true (pun intended). 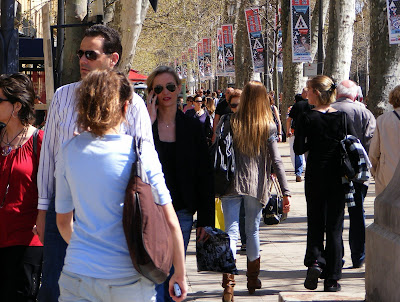 When you live on two continents, half the time in France and the other half in the States, you start to notice similarities. And differences.
One of the similarities is cell phones. One of the differences is how far-reaching the phenomenon has become. I’m not sure if it’s the roaming fees or the plethora of models and service providers to choose from, but America is definitely falling behind in the cell phone race. And I can prove it.
During the rush up to Christmas, stores in France sold nearly 800,000 cell phones. 800,000 in a nation of some 55 million people. Not bad for a country where only thirty years ago you had to wait up to two years to get any phone at all! Yet now there are so many people talking and faxing that France has adopted ten-digit phone numbers, even for local calls.
800,000 new cell phone callers added to the ranks of people who already owned one. Me included. Yes, I admit it. I have walked the streets of Paris, semi-oblivious to the beauty of the City of Light, my Motorola clutched to my ear, talking to friends sometimes, but usually doing business, making a last-minute appointment or booking a hotel or restaurant for my tour clientele. Sometimes as I walked my purse would ring and everyone would turn and stare. Those times are over. People no longer stare. They’re too busy reaching for their cell phones to see if the call isn’t for them!
Ah, the cell phone. What a great invention
But it creates very strange situations, such as...

While a friend and I were searching desperately for a parking place on the Ile St. Louis, a tiny island floating in the Seine behind Notre Dame Cathedral, our hearts leapt for joy as a man got in his car. Great, we thought, he’s leaving. We can take his place and make it to the restaurant for dinner before it closes. But no. He wasn’t leaving, just getting into his car... to phone! Why didn’t he use the phone at home? He must have been calling his mistress.
Then there was the lady in the phone booth. She blithely chatted on, the phone cradled against her shoulder as she leafed through a magazine. Suddenly there was a ringing, and she pulled out a cell phone and took a second call with her other ear.
Cell phoning isn’t just a street phenomenon though. People are even calling each other from trains. One woman was so aggravated at having to listen to a fellow passenger tell his whole life story over his cell phone, loudly and at great length, as they raced across the French countryside that she started to read her book out loud. "What are you doing?" the man asked in an irritated tone. "The same thing as you," replied the woman stonily.
But I think the prize has to go to this strange-but-true cellular story.
Among his Christmas gifts, a man got a cell phone. After all the presents had been opened, he and his guests adjourned to the dining room to enjoy a typical Christmas feast, complete with many courses and washed down by the appropriate wines. A few hours later, when he returned to the living room to try out his new toy, he couldn’t find it. He searched through the remains of wrapping paper scattered around the tree. In vain. He looked behind the sofa cushions, under the tables and chairs, searched his pockets. His guests all helped. Suddenly a friend had an idea. "Why don’t you just call the number and we’ll locate it when it rings." Brilliant! They found the number and dialed it. After a pause, they heard a muffled ringing, which, when traced, was coming from... the stomach of the man’s large dog! The veterinarian, consulted over a real phone, advised him just to wait until Nature ran its course. 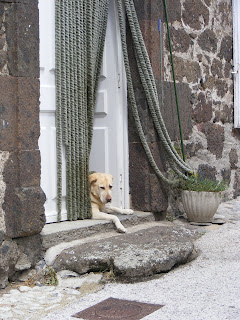