﻿ I moved to Paris right after the May-June Student Riots of 1968. I was supposed to have landed in Paris before that, but flights were cancelled when DeGaulle battened the hatches and shut down the airports. So I arrived just afterwards. The streets had already been repaired; the cobblestones that students used as projectiles against the riot police were back in place... and some streets were even asphalted over so as not to supply handy ammunition in the eventuality of a sequel.
One slogan written on many walls during the Riots (and still visible years afterwards) was "Sous les pavés, la plage" - beneath the cobblestones lies a beach. I don’t know if the creator of Paris Plage had that in mind when this summer event was created, but it must have floated through his thoughts.
This year marks the tenth anniversary of Paris Plage. It starts today, July 21, and runs until August 21. I’ll be back in Paris before it’s over, so I’ll post some photos then. For the moment, you’ll just have to make do with this one borrowed from the public domain.

When Paris gave in to its pressing need to ease traffic in the center city, an expressway was created along either bank of the river: the voies sur berges. Higher than the waters of the Seine and lower than the streets along the river now run two lanes that speed over 40,000 vehicles on their way every day. Recently this expressway has been closed on Sundays to allow pedestrians, roller-skaters and bikers to enjoy some safe "me time".
And then in 2002 another idea blossomed. "Let’s give these pale-faced city-dwellers a day at the beach!" So now, for one full month, 5,000 metric tonnes of sand is carted in to cover the expressway’s asphalt. Potted palms spring up along the Seine, deck chairs are unfolded, mist machines are hooked up and laughter is heard echoing up and down the river. The "beach" in Paris stretches one kilometer, from the exit of the tunnel running under the Tuileries Gardens all the way to the square in front of City Hall. This year there will be ten times more sand than in the past, to build "real dunes" held in place by wooden fencing.
As beaches are the perfect playground for children, especially if they don’t have a chance to go to the real seaside, activities have been organized. There will be contests for the best sand sculpture, and sandboxes will be installed at the Pont-au-Change Bridge for the very young. There will also be slides and teeter-totters. For parents and other non-children, pétanque courts will be created and fussball tables set up. And to show that there’s solidarity in such an event, City Hall has invited over 500 children from across Europe to come share in the fun for a day. (How they get to Paris, I haven’t the foggiest idea.)
The event has met with so much success since its start that there is now a Paris-Plage II. In the working-class 19è arrondissement of northeast Paris runs a huge man-made waterway, the Bassin de la Villette. Moored up along its "shores", visitors will find pedal-boats and kayaks to rent, and there will be areas on the "dockside" for such varied activities as tai-chi, ballroom dancing, BMX (bike motocross) and even a library.
On July 23 there’ll be a photo marathon, with the best photos winning a prize and placed on exhibit in late August. From July 11 to 24, concerts will be held on City Hall square, after which it will be buried in sand to create four beach volley courts. The rest of the scheduled festivities can be found on www.paris.fr.
Paris Mayor Bertrand Delanoë - a Frenchman born in Tunisia who knows a thing or two about sandy beaches, and who is also a Socialist - touts this event as "the meeting place of all generations, all social classes, all cultures", "a summer camp for city kids".
I’ll report back once I’ve seen this year's edition of Paris Plage myself.

P.S. For the moment, it’s raining no end over most of Europe and Paris temperatures range in the 60's. Not really beach weather. Let’s hope the sun comes out soon! 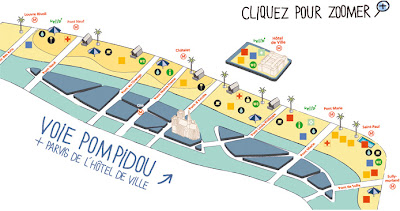 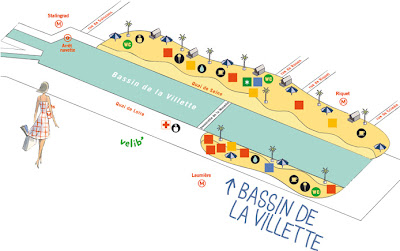