But baby, it's cold outside 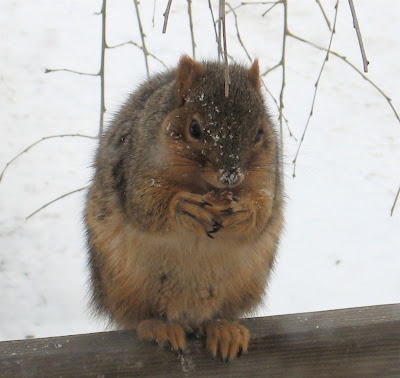 It was 50°F in Ann Arbor on Tuesday.  Then it all went south.
Or north.  Depending on how you look at it.

My last day before a Transatlantic flight and I’m running around, doing last-minute things. Like lunch with a friend. And checking on new refrigerators. And banking and packing and all. By the time I hit the airport, it’s already started to snow.
The plane needs to be de-iced... just in case.
When I get off at the other end, it’s cold by Paris standards. 6°C, which is 43°F. Even though Paris is at the latitude of Labrador - putting it way north of Ann Arbor - it’s still warmer than what I left. "This is good," I think.
And then I get to my apartment.
The young man who was living here in my absence for the past five years has moved out. Good for him. He’s finally earning enough to cover his own rent. Now he can get himself off hiatus and back into the rush of Life.
However...

He has turned the heat off. Luckily it didn’t get cold enough to burst the pipes. But with one wall of windows in this ex-artist’s studio, it’s as cold inside as out (see above).
Which means my first order of business is to get the thermometer moving upward. And fast! I light the hot water heater - which also supplies steam heat to the entire place - and with a resounding hoosh! it flames up. Yes! Sigh of relief.
Then I find the note. "I forgot to let you know the heat isn’t working." Yes, that might have been a nice piece of information to have. As it is, that news is distressing, given that the furnace - which shall hereinafter be called by its French name of chaudière - has needed to be replaced for a few years but the repairman has kept it working until I’ve finished paying off the condo fees for resurfacing the entire building... and I’m not going to tell you how much that cost but let me just say I haven’t been eating out for nearly two years.
So I find the number and call the chaudière people. The surly lady on the phone is no help. It’s clear I’ll have to take care of this in person. Plus, it’ll get me out of the house until it warms up a bit. Provided my chaudière keeps working.
Regardless of the fact that I didn’t sleep all night on the plane, I grab my coat and head out the door. It’s almost raining. Typical for Paris in January. Just around the corner is the bus stop and I catch the mini-bus that takes me up and over the hill that is called Montmartre and down almost to the door of the HVAC people.
Inside Little Miss Unhelpful is on the phone harassing someone else but a nice senior gentleman is shuffling papers at the front counter. For some reason he tells me he’s retired and I jokingly ask him why he’s here then. "I’m doing volunteer work," he quips and asks me what he can do for me. I tell him my tale of woe and he makes an appointment for me... for a week from today. Somewhere in there, the repairman pops up and says "Oh yeah, I remember that job" and promises to get there sooner if there’s a cancellation.
One problem down. Now I just need to get to my bank before the HVAC people try to cash the down-payment check I just wrote. So I hop on the mini-bus back up and over the hill to my south slope of Montmartre. 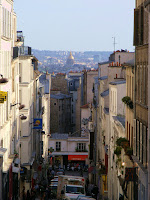 With the bank taken care of, and presuming the temperature must not have reached Comfortable yet, I decide to do some shopping. The only things in the refrigerator - which has been left spotless - were coffee (which I do not drink), a bottle of orange juice and a stick of butter. (Sounds like a skit I saw on Sesame Street many years ago: "A loaf of bread, a quart of milk and a stick of butter".) There are no paper towels left in the apartment, no kleenex, no napkins, no jam or jelly to go on tomorrow’s toasted baguette... At least there’s toilet paper, which hasn’t always been the case upon arrival! So down the street I head, and buy a lot of stuff because if you spend 70 euros or more, they deliver. And I live... uphill. Considerably. And I’m tired.
A stop into the flower shop to replace two dead houseplants (I did mention my tenant had moved out unannounced, didn’t I?), then the little Italian shop on the main drag rue des Abbesses for some real Parmesan, and finally the bookshop for this week's Pariscope that lists everything going on in Paris and its suburbs... and I’m back at the apartment. The inside temperature is now in the low 60s but still nippy, especially underfoot. (The floor is tiled and still plenty cold.) So I turn on the oven and light all four burners on the gas stove.
By the time the guy from the supermarket rolls his caddy into my garden, the place is pretty toasty and I’m tired but satisfied with all the business I’ve taken care of since touching down. Heater repaired and scheduled for replacement. Bank account back in the black. Larder restocked. Happy Plants on the windowsill. 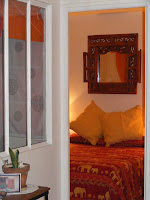 As I write this, rain is pattering a lullaby on the skylight overhead and the temperature in the apartment has finally reached 21°C (70°F). After about 36 straight hours on my feet, bed is beckoning, so...