Recipe of the month: Cassoulet 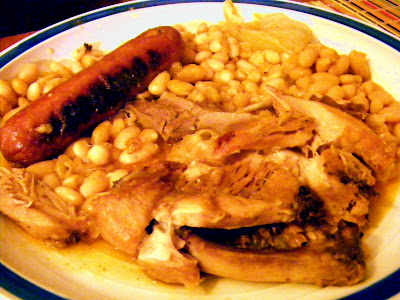 Every country has two types of food: haute cuisine - for when company comes - and comfort food. For instance, in America, there’s pork and beans in Boston and ham hock and beans in the Deep South. France has a similar recipe: cassoulet.
Cassoulet gets its name from the glazed earthenware casserole - cassole - it’s cooked in. It’s a regional dish from southwest France, in Languedoc... and more specifically Castelnaudary. When that town was besieged by the English during the Hundred Years War (1337-1453), legend says the starving citizens rounded up all they had left, dried beans and various leftover meats, to cook up a stew. The aroma wafted down to the English, who grew disheartened by the fact that there seemed to be enough food left to make tasty-smelling cuisine, and so the French were able to chase them off... after finishing their meal. Kind of like Popeye and his spinach. The only flaw in this legend is that the kind of bean used comes from South America, and Europeans hadn’t traveled there yet. But it makes for a good story. (The original version probably used broad beans, along with mutton, which was a typical Arab dish, and the Arabs had invaded the south of France, so...)
Whatever its true origin, this was French comfort food par excellence: cheap to make, hearty to eat, and easy to cook, left to simmer while the peasants were out working in the field. Today’s peasants could use a crockpot, if it’s sufficiently big. And today’s yuppies could use more expensive meats, like duck. Recently, I made some cassoulet for a dinner where one of the guests was Muslim, so I took liberties, substituting chicken sausages for the traditional pork variety and lamb replacing the ham hock. It worked pretty well. Besides, there are three types of cassoulet from three different towns, so there’s room for a little creativity. And I didn’t have the appropriate cassole either. Sometimes you just have to get inventive. But the recipe I give here is the traditional one. Or one of the three traditional ones, each with a slight variation.


- Soak the beans overnight in cold water.
- On the day of the meal, brown the meats in goose fat or olive oil, starting with the lamb, then adding the rest. Cover and let simmer for 20 minutes, turning occasionally.
- Strain the beans. Add them over the browned meats and almost cover with stock. (Use beef for a traditional cassoulet or chicken if you’re going pork-free.) Mix in the tomato paste, bouquet garni and onion. Cover and let simmer until the beans are tender (1-2 hrs).
- Remove the bouquet garni and onion and serve.
Serves 4.

If you’re going very French - and you can find it - add 4 pieces of confit de canard - preserved duck - to the beans when you put all the ingredients together.)
You can cook the cassoulet over a burner or start it there and finish it in the oven at 350°F (180°C), but in either case you’ll need a heavy enameled casserole. If you’re finishing it in the oven, you can sprinkle breadcrumbs over the entire top and drizzle some olive oil, which would make it a cassoulet de Toulouse. You can also add up to 4 peeled carrots along with the onion.

Accompany with a strong-bodied red wine, for instance a Cahors or a Corbières.
As this is a hearty meal, it stands alone. You could serve a plain green salad afterward if you want. And if there’s any dessert, I’d suggest just fresh fruit, or maybe a fruit salad.