Out and About: Exhibits - Jonas Netter collection 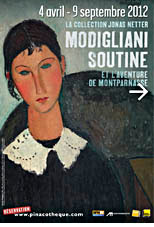 ﻿Many people have heard about Van Gogh’s relationship with the people who bought and sold his works, the chief of whom was his brother Théo. But not much is written about others.
Marc Restellini, director of the upstart museum Pinacothèque de Paris, has now seen to that.
Restellini’s new show - in the building kitty-corner to his other location, where Les masques de jade Mayas (see blog, Feb 19, 2012) is still showing until June 10th - is called La Collection Jonas Netter. It covers the adventure of Montparnasse, which started where the adventure of Montmartre left off. This was the period just after the Impressionists had become famous... and expensive. Which is why Jonas Netter sought out unknowns. In 1916, he fell under the spell of Modigliani, then Soutine and Utrillo.
Jonas Netter (1868-1946) was the elusive collector and broker of many artists, including those mentioned in the subtitle to this exhibit: Modigliani, Soutine et l’aventure de Montparnasse.
Why elusive? Because only one photo of Netter has been found. There’s a portrait by Moïse Kisling that is said to be him - and it does bear a striking resemblance - but the canvas is just called Portrait d’homme. And Netter only ever gave one interview.
He preferred to let the spotlight shine on his far more effervescent - and some would say unscrupulous - partner, Léopold Zborowski, or Zbo as he was called. And yet it was Netter who discovered the genius of Modigliani and Soutine... and probably Utrillo as well. Panels spaced throughout the exhibit literally gossip about Netter’s and Zbo’s relationship - to the artists and to each other.
Overall Netter had the better eye for talent. Zborowski often had to be convinced.
Zbo, the Polish immigrant, was a would-be poet striving to become Someone on the artistic scene of Paris. In an interview with the art review Connaissance des Arts, Marc Restellini described Netter’s partner: "A brilliant man, you could even say flamboyant, painfully talkative, a Catholic, he was only interested in Jewish artists of this school of Paris. Netter was just the opposite: A typical bourgeois, a Jew from Alsace, a tradesman (...) A silent, modest man who didn’t want to attract people’s attention (...) yet passionate about art... an exceptional musician and a prodigious pianist; he could have had a career giving concerts. But apparently he preferred the peace and quiet of his office."
In that same interview, Restellini underlined Netter’s importance. "He bought the first of Modigliani’s canvases in 1915 and, from that moment on, he was passionate about his works, to the point of collecting up to forty-two, which is about 15% of the painter’s production (...) A true buyer’s frenzy, in a man of total discretion." Netter bought hundreds of canvases of his favorite artists, snapping them up almost compulsively. "But he didn’t want people to mention him. No matter. Zborowski made up for that in spades."
Although things were supposed to be split 50-50 - sales and expenses alike - certain panels explain how Zborowski sometimes tried to get artists to bring him their works instead of taking them to Netter so that he could have first choice, and maybe even not mention certain canvases to his partner at all. Yet when artists were in distress, it was always Netter they turned to. When Utrillo was in an asylum to kick his addiction problems, it was Netter who paid for the furniture he broke in his rages. When Soutine wanted desperately to move back to Paris from "exile" in Céret, it was Netter who took his side and gave the order to send him a train ticket. Ten years after the death of Modigliani, it was Netter who worked tirelessly to preserve and promote the artist’s reputation, including well beyond the borders of France.
A large part of the canvases that hang in this exhibit come from private collections and have never been seen in public before. Visitors progress from Utrillo, his mother Suzanne Valadon and Modigliani to Soutine and then on to smaller groups of works by André Derain, Maurice de Vlaminck, Isaac Antcher, Pinchus Krémègne, Eugène Ebichre and Henri Hayden. One sees the slow shift from Impressionistic influences - one canvas almost pointillist - to hints of Cubism and beyond.
All these works are assembled for the first time ever and will disappear back into their various homes and museums after September 9th. So strap on your skates and get over to the Pinacothèque.
And if you go before June 10th, you can hop across the street and see the jade masks of the Mayas as well. So double your pleasure.