Years ago, when I was just starting to do tours of France, I heard from a friend’s brother-in-law that there was this "really neat little hotel" down in Provence, outside of a small-ish town with many Roman fountains. It was run by an old French couple and was very authentique. Genuine. I noted it down and when the following year I had a family to guide through the south of France, I sent the hotel an e-mail inquiry.
I got a reply from a British man named Richard Ryan. He and a certain Peter Cuff had bought the hotel.

There was - and still is - a lot of that going on. French hotels bought up by foreigners and becoming only marginally French. I clearly remember sending him what I hoped was a polite but firm reply stating something to the effect that my tourists came looking for France, not England. He, in turn, politely defined the changes: TVs in the rooms and those British plug-in tea kettles... but that both could be removed if I so desired.
﻿     I went with my tourists anyway... and we all enjoyed the hell out of our stay. The rooms were small and simple but clean, tasteful and especially authentique. The TV and tea-kettle stayed.
Over the years and the visits, I got to know Richard much better. And I can only cringe as I imagine the words that probably came out of his mouth as he read that polite-but-firm e-mail of mine.

Richard and Peter were a couple. They had run a hotel in southwest France before their Provence hotel. And before that, Richard was an accountant - or something of the sort, something... well, stuffy but successful. He became besotted with Peter, the artist, from the moment they met. Which was many years previously. It was Peter who dragged them off to France, and I’m sure Richard’s life was much more settled before they met. But he loved him.
When you stayed at the hotel, you soon learned that Peter was the Good Cop to Richard’s Bad Cop. Peter was all smiles and gentle humor with only a drop of chiding from time to time. Whereas Richard was sarcasm and wrinkled lip, sighs of exasperation, impatient rolling of eyes. But I gave as good as I got, and I thought I noticed that he enjoyed that, in a very secretive way.
One day I arrived and Peter was in a bad mood. Acting foul. Very out of character. I told him so. "I have to be the Bad Cop," he retorted. "Richard’s not around."
﻿﻿     Peter also collected dogs. At one point they had three, who more or less had the run of the restaurant but most especially of the terrace.﻿﻿ ﻿﻿      The duo ran the hotel like slightly quirky clockwork. Over the years, they improved little details, but kept it traditional French provençal. Authentique. Peter told me that the initial changes they had made were more in the line of replacing tattered lace curtains with new ones and the chipped china with plates that Peter himself decorated in different shades of provençal blue. I wanted one badly but they weren’t for sale. 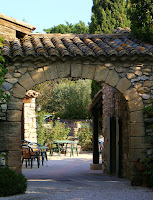 The restaurant was superb. To die for. And the setting was pure paradise.

﻿﻿﻿﻿Then in the summer of 2009, after maybe fifteen years, Peter decided to clean the pool after lunch. It was a quiet time. Guests were still out touring the wonders that are Provence. Lunch guests had headed off. Richard went to their home across the road to do some book-keeping. The staff drove off on their break before the dinner rush.
And when the maid came back, she found Peter’s clothes folded neatly on a chaise-longue and Peter floating, face down, in the pool. No one knows how long he’d been there. His body too hot from working in the sun, he had died instantly of what the French call hydrocution upon diving into the pool to cool off. 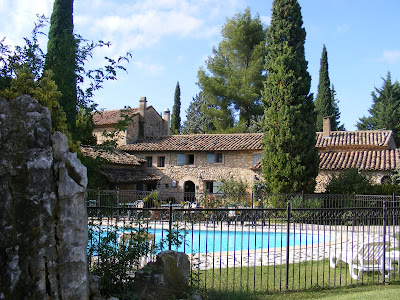 Richard was never the same. I just happened to call shortly after the accident, to ask if there was room at the inn because I needed to get away from Paris. He said there was, and just before hanging up, told me that Peter had died. That’s all.

When I arrived at the train station, Richard had arranged a taxi driver friend to pick me up. Wanting to know more so as not to put my foot in my mouth, I asked the driver what had happened and he filled me in. When I reached the hotel, it was nearing the end of the lunch service. Richard was still there, hovering around, not accomplishing much, thinner than ever. Instead of the usual greeting of "Oh God! It’s back!" he asked me if I’d eaten. Then told the staff to set us up two plates outside in the shade. From where we could see the pool. 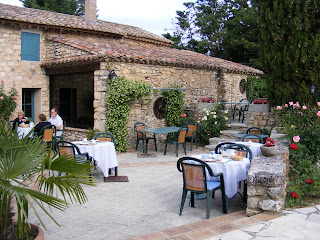 He proceeded to talk for two hours. And I listened. And we drank.

I still have the e-mail he sent me three months later. It ended, "Despite the fact that you and I have always had verbal jousting sessions, I must say that your visit came at the right time for me and helped me to unload a lot of my stress. Hope it wasn't too hard for you!!" Typical Richard. Very understated. Very guarded. Very cards-to-his-chest.
From that point on, every time I came down, we’d have almost every meal together, the dogs (now only two left) lying under the table. He invited me to his home, although only briefly. We went on several food runs together. We exchanged Christmas cards. And every card, every e-mail, from that point on was signed Rxxxx. Kisses from Richard. 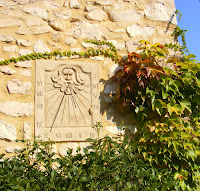 This spring I told him I’d come down to see him in early June, to see how he was recovering from the scheduled removal of the kidney he had announced.

About a week ago I flew back to France. And before I could get down to see him again, I got an e-mail from someone I’d met down there, a fellow guest at the hotel. He was sorry to tell me that Richard had died.
It took me a week to screw up my courage. I called the hotel. The kidney had been removed... but the surgery caused a double pulmonary embolism that got the better of my favorite old curmudgeon. In classic black humor, I remembered an old doctor’s joke about the operation having been a success but unfortunately the patient died. I’m sure Richard would have enjoyed that joke. 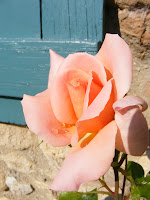 I’m not a believer. Don’t know if God exists or if there’s a life after this one. But I’d like to think Richard has been reunited with his beloved Peter. And that Peter will be kinder to him this time around.