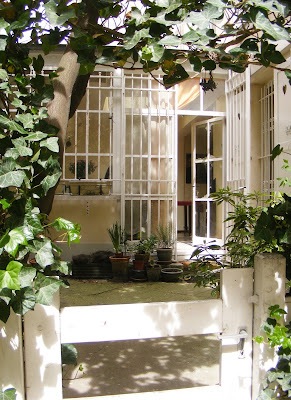 Winter has been long.  On both sides of the Atlantic.
In spite of Yarburg's famous lyrics - "April in Paris / chestnuts in blossom" - the chestnut trees in the French capital are just blossoming now, in mid-May, which is very late.  Today, somewhere in the south of France, where water is generally at a premium, two weeks worth of rain will fall in a 24-hour period.  Up north, the rivers are just easing back between their banks and the Zouave's feet are drying out on the Paris bridge he adorns (see Le Zouave du Pont d'Alma, Feb. 8, 2013). My garden has been devastated more than any other year in the seven years I've lived here.  One ceramic pot even burst in the freezing cold, my neighbor told me.  She has kindly planted seed in the garden and the window boxes, so nasturtiums are starting to pop out all over, but there's still lots of work to do.  The parsley and bay leaf made it through the cold, wet months, the forsythia too.  And last year's gift of lily-of-the-valley which I planted has actually come up.  In France, lily-of-the-valley (muguette) is a symbol of happiness, and I'm hoping it will ring in a whole new year without indoor water leaks or other expensive repairs.

Coming back to France is always a culinary delight.  The green grocer, with whom I've become quite friendly (thereby ensuring the special grapes or ripest melon), always has something delicious to cook up... or just eat raw.
My visit today not only got me a warm welcome and a "Glad to see you back", but a 25% discount on the morels and a free head of lettuce.  That's in addition to what I bought. 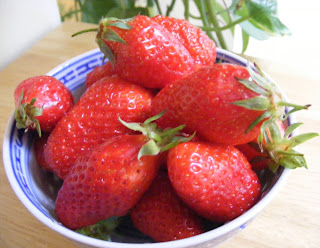 I couldn't help but be tempted by the gariguette strawberries, an early-blooming variety from southwest France.  Smaller than the regular sort fancied by my American visitors, pointy instead of round, they're far sweeter, and with a taste that I remember from my youth Stateside.  Today's American strawberries are huge but full of water, but these wonderful treasures have kept their strawberriness.  No sugar or cream needed, although some like them that way. Just a swish under the tap to clean off any dirt left from the berry patch and - pop - in the mouth.  (Only buy what you're going to eat that day and the next because they're fragile creatures.) 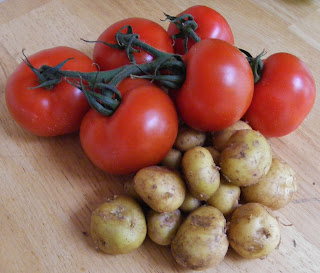 I also gave in to the minuscule potatoes from Noirmoutier Island, called Bonnottes.  Said to have gone extinct, they were revived somehow (DNA?) by a local grower's association working with INRA, the French Agronomic Research Institute.  These tomatoes, also very tasty, are on the small side, so you see how tiny the potatoes are in comparison.  Some of them would fit in a thimble!  They're picked extra early, which is something my great-aunt in Pennsylvania used to do in her own vegetable garden.  I'd never tasted potatoes like hers anywhere else... until I tasted these.  Another fountain of youth, back to the days when things seemed somehow to have more flavor.  You just wash them off - maybe scrub them with a nailbrush to remove the dirt they grew in, because they're not pre-washed in bleach water here in France - and then cook them in butter and parsley... and maybe a hint of garlic, but then again, that might cover the taste.
As for the tomatoes, just cut them up, sprinkle some basil over the top and a drizzle of excellent olive oil, salt and freshly ground pepper and you're in business. 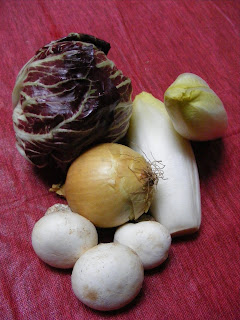 The last of the winter endive was still available so I bought some.  (To keep the small but free head of radicchio company.)  Just a few staples - onion, mushrooms, garlic - and I'm all set in the fruit-and-vegetable area.
Now on to the cheese shop.