A bit of history.  Or mythology.  Depending on your beliefs.
After the crucifixion of Christ, some of his disciples were banished..  Among them were Mary Salome and Mary Jacobe.  (And yes, I know they’re not seen technically as disciples, but they should be.)  They were put in a boat in Palestine, towed out into the Mediterranean, and cut loose, without sails or oars to steer by. Luckily for them, the currents and winds - and the Holy Spirit, if you’re a believer - carried them to a peninsula sticking out from the Camargue marshes of the Rhône River delta on France’s Mediterranean coast.   That was circa 48 A.D.
Some people add Mary Magdalene to the passenger list, and she is said to have died in France, but she moved on after landing so I’m sticking with the story of the Two Marys, not three.  Besides, there are only two of them on the town’s coat of arms.
Neither Mary is the important part of this story though.  That role falls to Sara, the Black Virgin. 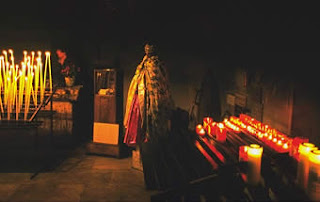 One version of the tale has Sara being the servant of of all three Marys and says she arrived on the ship with them.  Another says she was an Egyptian queen or abbess and was already there when the boat landed.  Both Marys and Sara are said to have remained in the region, and died there, which is why the town became called Saintes-Maries-de-la-Barque (St. Marys of the Boat) and much later Saintes-Maries-de-la-Mer (St. Marys of the Sea).

Whichever version - if either - is true, Roma gypsy tradition says that the Gypsies were led out of Eastern Europe toward the ocean by a dark-skinned woman they identify as being Sara.  And so every year since the early 1800s, they have traveled from all over Europe to Saintes-Maries-de-la-Mer on May 24th to venerate her, their patron saint... and the other Marys as well.  (The feast of the Two Marys on the 25th has been going on since the Middle Ages.) 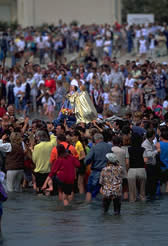 On the 24th, Sara’s statue is draped in multiple mantles and taken out of the crypt of the fortress-like 12th c church where it swelters all year long amid votive candles.  The gypsies carry her through the streets, down to the Mediterranean and into the water.  The next day it’s the turn of the Marys and the boat that carried them to the French coast.
Throughout the two days there is much clapping of hands and singing to guitars and violins, flashy flamenco dancing, drinking, eating and general merry-making until the early hours, or even beyond.  It all ends in a farewell ceremony and the gypsies disappear down the road, leaving the town to sleep until next year, safe among its pink flamingos, white horses and black bulls. 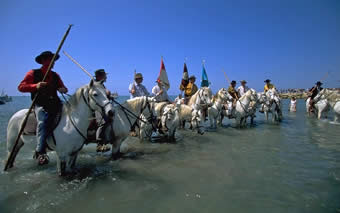 The town has known other events not saint-related.
- During the winter of 859-860, the coldest of the entire 9th century, Vikings camped here before resuming their marauding up the Rhône Valley as far north as Valence.  (Even way back then, southern France attracted Scandinavians like a magnet.)
- In September of 869, it was the turn of the Sarrasins to raid the marshes of Camargue, taking the visiting bishop of Arles prisoner.  In return for the ransom handed over on the beach of Saint-Maries-de-la-Mer, they returned... his body.
- In June of 1888, Vincent Van Gogh spent five days in the town.  His series of watercolors and drawings included seascapes, the village and the local fishing boats.

Note:  You can see Saint Sara’s procession in the film by Tony Gatlif, Latcho Drom (1993).
Or you can watch a slide show here:  http://www.youtube.com/watch?v=2DEZ2s9Ulrs

Confession: Although I’ve been to Saintes-Maries-de-la-Mer, it wasn’t during the procession.  So these photos are not mine.  Maybe some day, but not this year.
The photo of the procession is by G. Vlassis.  The others, I don’t know.