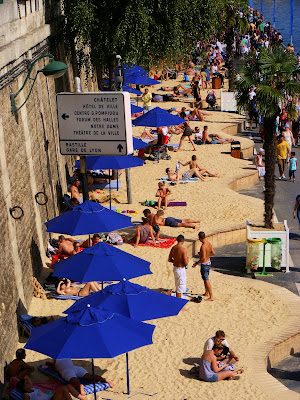 Paris used to be desperately deserted in August, except for the tourists.  Parisians fled, seeking refuge from the capital's heat and humidity for a summer rental or grandparents' homes in the country.  Everyone, that is, but those who had no rural relatives and couldn't afford to rent a place in the mountains or by the sea... or anywhere else, for that matter.
Then came Paris Plage.
In 2001, Paris elected the first Socialist mayor of the French capital.  He came on the heels of two right-wing mayors:  the unpopular one-term Jean Tiberi, who was shooed in by his predecessor Jacques Chirac when he moved on from City Hall to the French President's mansion.
Delanoë was not only a Socialist, but also openly homosexual and living with his partner.  Many Parisians seemed dubious that he would prove the right fix for the job.  Then he started doing things.
One of the first things Delanoë did was to create the newest beach resort of France:  Paris Plage.  And it was free.  The facilities were a blessing for all those who couldn't afford to go elsewhere.  At first it involved merely closing the riverside expressways to cars and turning the space over to people, complete with some games and entertainment.  The following year sand was trucked in.  Then the following year full-grown palm trees were added, and sprinkler systems for cooling off.  Now there's much more, including a floating swimming pool and a ferry to take people back and forth between the two banks.  In 2007, the beach alongside the Seine River was joined by a second site in the working class 19th arrondissement along the Bassin de la Villette.
This year the month-long party ran from July 20th to August 18th.  As I write this, workers have been shoveling sand back into dump trucks all night long. It's the last year Delanoë will be mayor of Paris.  He says he won't run for re-election next spring.  People wonder what the future holds for this summer beach party, although doing away with it would probably cause a second revolution.  Hopefully, Paris Plage is here to stay.
Here's a rework of a previous story I wrote on it. 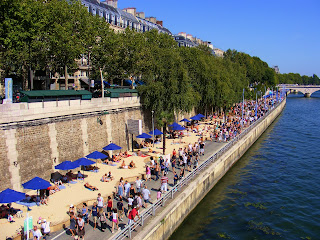 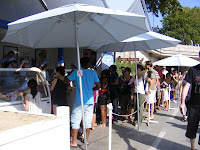 After a freezing winter and an equally grim spring followed by a chilly month of June, summer finally came to Paris in time for Paris Plage.  Thousands strolled the banks of the Seine, getting a tan on the sandy beaches laid over two lanes of concrete.
Some people elected to sunbathe outside of the sanded perimeter... which is what people do along the Seine throughout the summer anyway. But hard cobblestones are no match for sand when you want to be comfortable, so they were in the minority. Most sunbathers were stretched out between the ultimate romantic bridge, the delicate Pont des Arts, and the Pont de Sully at the far end of the Ile St. Louis, a distance of 2½ km (1½ mile). 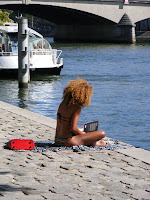 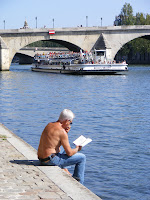 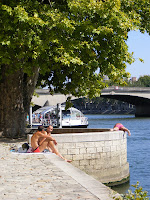 While adults were basically just basting and roasting themselves, children could build sand castles, watch a clown twist balloons into shapes, play paddleboard, romp on a huge adventure playground or explore Disney’s replica of its famed Enchanted Castle. Of course there were buskers: a shapely blonde who belly-danced while playing with flaming swords and two young men giving a capoiera demonstration, among many others who came and went. 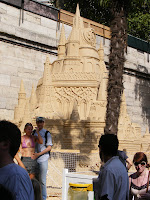 And in front of City Hall, the square had been turned into a football field where children were learning how to dribble footballs and shoot goals into huge inflated nets. 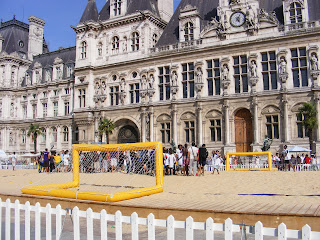 At the second beach along the Bassin de la Villette, more fun was being had, minus the tourists because this is a part of the city they haven't discovered yet.  I lived here for six years and although it was already a favorite with young bikers, couples strolling, and groups of friends picnicking, it was nothing like this.  All along the west side and halfway back down the east sand had been carted in and chaise longues and folding beach chairs plunked down - free, first come first served. But there were more activities here than along the Seine. Games for young and old alike: pétanque (French bocce ball), pingpong, babyfoot tables (fussball, in English - even though that’s German!), a train ride, and the cherry on the cake: a wave machine for kids to surf! 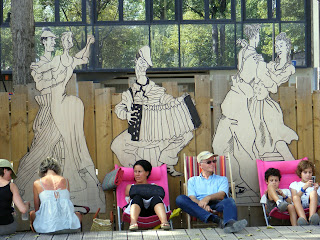 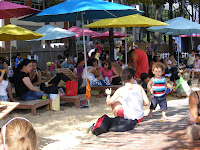 Because of the heat, and because it probably isn’t wise to swim in this water - although some teenagers like to jump in at the far end - there was a mist machine to cool people down... mostly kids, but I once saw a very chic-looking sixty-something woman all in white walking through it. And there was a multi-tap drinking water dispenser on either side of the canal, just to make sure no one keels over from dehydration.  (The same thing existed along the Seine as well, both installed by the Paris drinking water service.)

Water was the highlight here. As there is very little barge traffic remaining on the canals that feed into either end of the Bassin, water activities were everywhere. With many Chinese in this neighborhood, someone organized dragon boat races in 2011 and they've been held ever since. There was a sailboat to teach apprentice sailors how to navigate, being careful to miss all the rented pedal-boats, kayaks and canoes. And one big favorite was the large inflated hamster cages in florescent colors that twirl across the water as you walk inside them or float with the waves and wind. 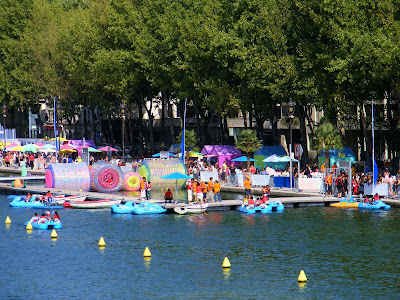 Sunday was the last day of Paris Plage for this summer.  With a possible change in political party serving as mayor next summer, no one knows if the sand and palm trees have been carted away for the last time and whether the beach will become but a wistful memory. Has Bertrand Delanoë set up something lasting that will endure beyond his "reign"?  Will the riverside remain closed to traffic along some of its length, or will his replacement turn it back over to cars?  No one knows.
But at least one more summer has been made more bearable for Paris.  And definitely more colorful.