Recipe of the Month: Poivrons grillés

At the height of its colonial days, France’s empire, like that of Great Britain, stretched around the world.  While a 19th century Englishman could proudly boast that “the sun never sets on the British Empire”, it could also be said that its rays were always shining on the French flag somewhere as well.
For openers, there was a huge swath of Africa flying the bleu-blanc-rouge.  Some of the French possessions were included in what was called French West Africa:  Mali, Niger, Senegal, Ivory Coast, Guinea, Dahomey (now Benin), Mauritania, Upper Volta (Burkina Faso), and Gambia.  There was also French Equatorial Africa:  Chad, Gabon, Cameroon, the French Congo and the Central African Republic.  Plus parts of East Africa, mainly the huge island of Madagascar but also Djibouti, tiny but strategically located at the southern entrance to the Red Sea.
In India, France ruled “trade counters” that each French schoolchild had to be able to rattle off by heart:  Chandernagor, Pondichery, Yanam, Mahe and Kankal.  And then there were the islands linking Africa and the Subcontinent: Réunion, Mauritius, the Seychelles and the Comoros (including Mayotte, which voted recently to remain part of France).
In the Far East, France also had “trade counters” in China, such as in Shanghai, as well as Japan.  But chiefly it held Indochine, later to become Laos, Cambodia and Vietnam.  Plus islands farther off still, which remain part of France’s Overseas Territories even today:  Tahiti, New Caledonia, Wallis and Futuna, and the Marquesas, where Gauguin and Jacques Brel both chose to live and die.  Not to mention a scattering of islands in the Southern Ocean, including the far-flung outpost of the Kerguelens (also aptly called the Desolation Islands).
There were also places it “held in trust” for more than two decades in the Middle East:  Lebanon, Syria and parts of what would become Israel.
Continuing around the globe into the Western Hemisphere, France held parts of Brazil for a while, as well as all of Mexico under Napoleon III. French Guiana on the north coast of South America is still an overseas “state” of France - like Hawaii is to the U.S.A. - and home to France’s space launches at the base in Kourou.
In North America there was New France, which it ceded to Britain in the Treaty of Utrecht (think of Longfellow’s poem “Evangeline”).  Yet French is still spoken there, being one of Canada’s two official languages, and French influence can be felt throughout the provinces of Québec and the Maritimes. Somehow St. Pierre and Miquelon, islands off Canada’s east coast, are still an integral part of France... the very coldest part.  As for the United States, most of the land between the Mississippi and the Rockies belonged to France until it was sold - as the Louisiana Purchase - to President Thomas Jefferson in 1803 for a pittance - less than 42 cents per acre!  What’s more, the Napoleonic Code, created by Bonaparte to rule France after the French Revolution, is still the basis for state laws in Louisiana.  Lastly, the islands of the Caribbean: Martinique, Guadeloupe, St. Martin’s, St. Bart’s - all of which are still France. And then there was Haiti, the crown jewel France sought to retain with Jefferson’s money,... yet lost just the same. 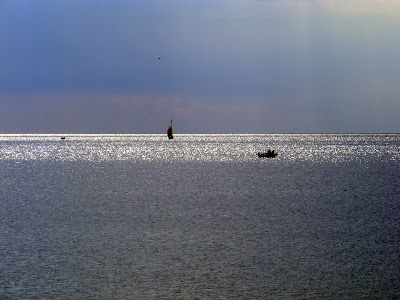 But the colonies France kept the longest lay just to its south, across the Mediterranean in Northern Africa.  While Tunisia and Morocco were granted their independence in 1956, Algeria had to wait six more years, most of them in bloody rebellion, until its independence.  For a while Algeria had been a département, an overseas “state” of France, again like Hawaii is to the United States, rather than just a territory like Puerto Rico.  It was a part of France and its citizens were French by birth... but not all equal.  Unlike Morocco and Tunisia, it took a long, bloody war for France to let go of Algeria, and the many deaths incurred on both sides partially explain any present-day animosity between the French and the Algerians.
I tell you all this because I learned this recipe, such as it is, from a pied-noir, which means Blackfoot.  In France, that’s not a Native American tribe... unless you’re reading a Lucky Luke comic book. It’s a person of French or European origin born in Algeria during the colonial period.  Given the dates, there are few of them left, but the term  - and the accent - remain.
This particular person left Algeria when France gave the nation its independence - or when Algeria won its independence, depending on how you look at it.  That was in 1962.  He moved across the Mediterranean.  But just barely.  He opened a restaurant in Port Leucate, on the sand spit between Narbonne and the Spanish border.  It’s really just a marina with no history predating 1960, made up of only holiday condos and mooring for 1,200 pleasure boats, plus a few ship chandlers and a smattering of bar-restaurants, one of which was his.
So here's the recipe, as he gave it to me. 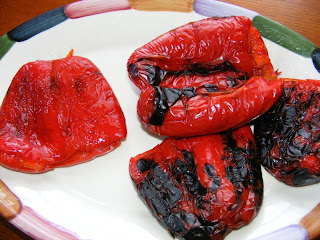 - Brush the outside of the peppers with olive oil. Char them over an open flame so that the skin blisters.  It will take about 10 minutes.  A grill is handy here, but you can use a gas stove; it just makes a holy mess to clean up.

- When the peppers have cooled, remove the skin.  It should slip right off.  One trick is to put a cover over the peppers while they cool, so the steam makes the skin easier to remove.
- Cut the peppers open and remove the stem, seeds and filaments.  Cut into long strips.
- Place in a bowl and dress with some olive oil and a dribble of balsamic vinegar, plus salt to taste.  You can add some freshly-ground pepper if you want, and even some crushed garlic if you’re feeling particularly Mediterranean.

And there you have it.  A perfect accompaniment, especially on a hot day, for either grilled fish or meat.  And in well under a half-hour, depending on your peeling skills.  You can prepare it ahead of time and then go for a swim until it’s time to fire up the barbecue!
Happy August!

TIP:  If you don’t finish all the roasted peppers, you can chop the left-overs up and spread them on toasted slices of Italian or French bread to make bruschetta.  Or turn them into an easy, inexpensive and delicious salad dressing.  Just run them through the blender with 3 parts olive oil to 1 part balsamic vinegar and a bit of freshly-ground pepper.  Voilà!