On the Road: Return to Biarritz

When talking geography, people say they’ve traveled to the four corners of the globe... which has always confused me because a globe has no corners.  But then again, we’re talking geography here and not geometry.  People also travel to the four corners of a country, except in France.  France is L’Héxagone, which should require no translation.  And as a hexagon, it has six corners.
I’m off to one of them, the very southwest corner, the Basque one that’s just pre-Spain.
I have big hopes for this trip after six weeks of crummy weather not worthy of the end of spring. Something about the words “June” and “heating” just aren’t meant to go together.  And there are only so many days you can use your umbrella before thinking maybe you should ask Mother Nature for your money back.  So my hopes of finally drying out and warming up are high.
Trains to Bordeaux and beyond to the Spanish border leave from the Gare Montparnasse, as do those to St. Malo (see On the Road: St. Malo on Brittany’s Côte d’Armor, June 29, 2013).  Actually it services the entire west side of France.  So it’s back across town on the métro and onto the TGV for a 5+ hour trip from the drizzle into the light (fingers crossed).

The train doesn’t stop until Bordeaux, after which it becomes a local for people - including many locals - traveling between Dax, Bayonne, Biarritz, St. Jean de Luz and finally Hendaye at the border.  The car I’m in is sold out, with many seats occupied by a young Chinese contingent of both sexes who get off in Bordeaux. One, who is bilingual, appears to be the organizer for the others and I’m sorely tempted to ask him what their business is.  Perhaps a tour of the wine châteaux for a wine tasting or to scope out the next area of investment for the Middle Kingdom?

After Bordeaux comes a dreary ride across the pine forests planted under Napoleon III in what was just marshland before, and pasturing for the sheep who give milk for those wonderful cheeses with unpronounceable names:  askorria, ossau-iraty, idiazabal...  This is the Landes, the moors which produce a huge share of the wood used in construction all over the country. 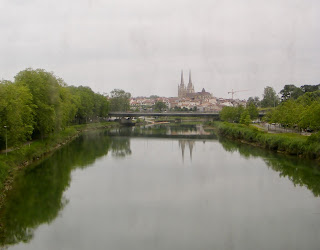 Then comes the bridge over the Adour and into Bayonne, the only major port between Bordeaux and Spain, famous for making chocolate a popular import from the New World.
After that, there’s just enough time to put away the book and gather up my “effects” before Biarritz.

The train station is on the edge of town, to which it was exiled so as not to bother the glitterati of this financially comfortable resort town.  The short bus ride to my friend’s apartment wends its zigzaggy way past the camping grounds near the beach, then along the coast and past splendorous seaside buildings dating from the Belle Epoque through the Roaring Twenties.  There has been much money in this town - first the nobles of Spain, then the court of Napoleon III and Empress Eugénie, then the wealthy Russian émigrés who made a timely exit from Lenin’s new deal with far more than just their lives, and then the movie stars of silent films.  And there still is money here.  It’s a town of casinos, four-star hotels and thalassothérapie, complete with an airport that sees passengers such as Cameron Diaz, Madonna, Julia Roberts and soccer star Ronaldo fly in often.
And then there are the regular people, like my friend born and raised here until she moved to Paris for work, people who love the mild climate that makes living on one’s terrace such a pleasure pretty much year-round.  Plus enough rainfall to turn the countryside green, unlike the Mediterranean coast. 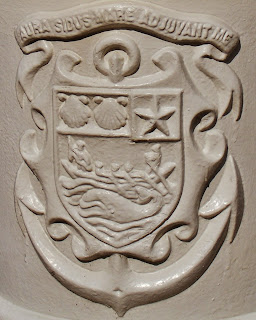 This town of 26,000 was once just a tiny fishing port known for its whaling ships.  They plied their trade all the way to the Great Banks off North America long before Columbus discovered the New World.  So much so that the crest of the town is a dory floating over a huge whale.  Five whalers are in the dory, one with an anchor at the stern, one with a harpoon in the bow and the three middle men pulling hard on their oars. Above all that are a star and two scallop shells to indicate its position on one of the Compostella Roads, the route that ran along the Atlantic Coast all the way from Mont St. Michel (see Mont St. Michel, April 4, 2012) to Hendaye. 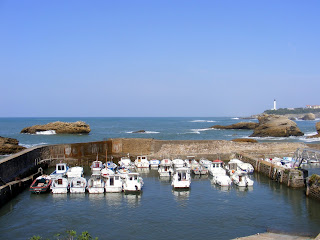 The Port des Pêcheurs (fishermans’ port) and its handful of crampottes, tiny fishing shacks clinging to the cliff overlooking the port, is all that’s left of the old town.  The sandy beaches just down the coast became prime real estate only when swimming evolved into a pastime in the 19th century.  Before that it was of no interest whatsoever because it afforded no safe anchor for ships... and because water was synonymous with drowning.  Now it’s off in its own corner, far below the shopping district atop the cliff, and cut off from the vast beach by the Rocher du Basta.  It still offers mooring for small boats, and good food at three restaurants, plus a few shacks filled with surfing and boating gear.  And maybe one or two of those crampottes still have a cot to sleep on, but if anyone still “lives” in them, I’ll bet they use the toilets at one of the restaurants. 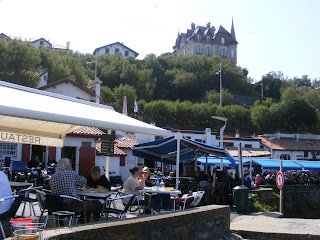 We have lunch outdoors on the dockside at Le Corsaire, my friend’s favorite, where the waiter proudly announces that the fish is fresh off the boats this morning - except for the tuna that comes from across the border.  We choose to share the first course - moules marinières and also fresh anchovies a la plancha - before moving on to fish for her and grilled prawns for me.  The food is excellent, the crisp white wine chilled... plus the sun is out so we’re thankful for the parasol over our heads. 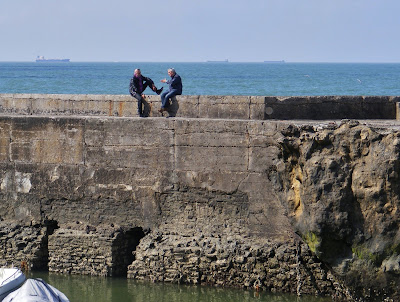 I notice there’s a ship out at sea.  A half hour later, it’s still there.  And remains there until finally we ask the waiter if he knows why.  He explains that it’s waiting for a berth at the docks in Bayonne, just up the coast.  This evidently happens all the time, and by the time our meal is over, there are three of them anchored offshore.  Like I said, Bayonne is a busy port.
After lunch we escape in time to miss the blaring loudspeakers just a stone’s throw down the docks.  They accompany the final rehearsal for tonight’s amateur dance show.  American rock music and tanned girls of varying ages do acrobatic routines, including a kick-boxing dance, as retired fishermen get off their bar stools to come stare and “rinse their eyes”, as the French say. 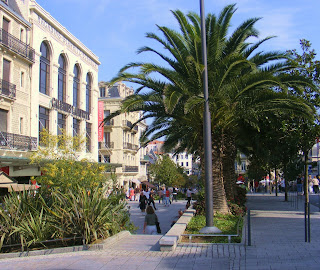 My friend shows me the interior of Sainte Eugénie Church, named after Napoleon’s Empress.  And then we walk to our bus along a shopping street that is half-chic half-bohemian, which offers me an excellent opportunity to buy a birthday gift for an upcoming party back in Paris. 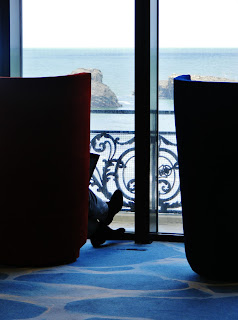 Another day we stroll along the beach from the lighthouse to the casino.  I’d never been inside the casino, so we walk through.  In addition to a restaurant indoors and out, there’s exhibition space (a health foods show at the moment) and a room with 200+ slot machines.  Not my idea of a casino - which should be filled with elegantly-dressed people setting their chips down on green felt, a little ball spinning in a roulette wheel and a handsome croupier saying “rien ne va plus!”  But the decor is wonderful - Art Déco and spacious halls leading to vast windows overlooking the ocean.  There are comfortable armchairs to sit in and lots of peace and quiet.  Anyone is welcome to sit and daydream in front of a view to die for. 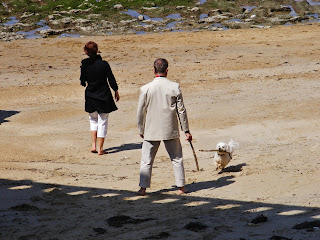 On the other side of the window, people are enjoying the sun and waves.  Just up the coast to the north is Anglet, the surfing capital of France.  Here the waves are calmer and there are rock formations nearby, which makes for iffy surfing.  But the tide is out, so there’s a game of beach soccer and plenty of children... plus quite a few dogs.  A labrador with a tanned bather, a poodle with a businessman, his elegant linen pant legs rolled up, both dogs running after sticks.
It all reminds me of my very young summers in Island Heights and Seaside Heights.   Especially the waves.  This is the ocean I learned to swim in, and I’d like to bring my family here.  I might even buy a dog.


P.S.  On the train ride back up to Paris, I note that the three days without rain have allowed the Adour, the Garonne and the Dordogne Rivers to settle back into their normal beds. The difference in the water level is noticeable.  It’s a relief to the entire area, which was subjected to major flooding in May and June. 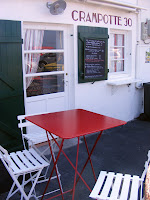 P.P.S.  For those of you in and around New Orleans, the name Jean Lafitte may ring a bell.  This famous pirate, the King of Baratiara, was originally from Biarritz. 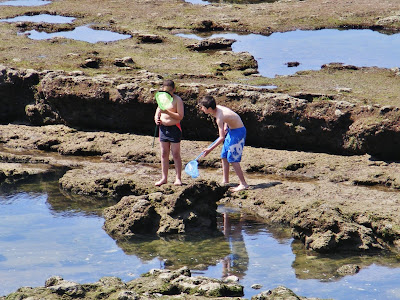