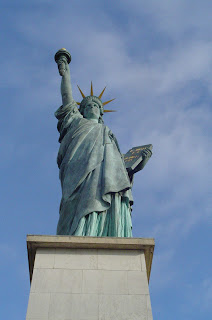 On Independence Day 2013, the Statue of Liberty re-opened to the public.  Hurricane Sandy had done it considerable damage and the famous statue was closed for eight months for repairs.  The hurricane put 75% of the island it stands on underwater.  The dock and paths were destroyed.
But the statue itself came out of the storm unscathed.  “Tempest-tost”, like the homeless huddled masses immortalized on its bronze plaque.  But unscathed.  Still standing where it has stood since 1886.  And that’s largely thanks to the French artist and engineer who designed and built her well.  Their gift to mark the friendship that unites France and the United States. 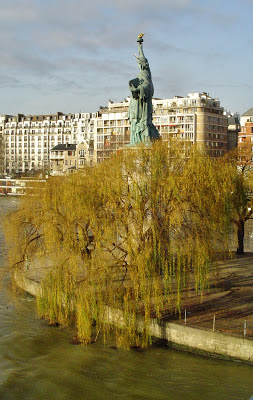 The idea of sealing Franco-American friendship with a statue came from a French politician named Edouard René de Laboulaye.  The Americans would provide a site - Bedloe’s Island - and build a pedestal; the French would create the statue.
Both countries were going through hard financial times.  On the American side, future President Grover Cleveland, then Governor of New York, vetoed the project’s funding, and Congress also refused.  That’s when publisher Joseph Pulitzer called for donations in his papers so work could continue.
Meanwhile, back in France, the statue was being designed by sculptor Frédéric Auguste Bartholdi.  The idea of liberty was dear to him.  He served in the French army during the Franco-Prussian War, in which his native Alsace was annexed by Prussia, and was a liaison to Garibaldi, the leader of Italian liberation.  That may be what gave Bartholdi the idea of using the Roman goddess of freedom with broken chains at her feet.  The tablets she holds bear the date of the Declaration of Independence, accentuating the freedom motif.  The face is said to be that of Bartholdi’s mother.  The head was completed for the 1878 World’s Fair.  And the right arm was shipped to America for its Centennial festivities in Philadelphia, and from there to New York where it waited patiently for the rest of the body to arrive.
Bartholdi decided on copper for the “skin” of the statue, not only because of its color but also because of its light weight.  The sheer size of the statue was daunting: 151 feet 1 inch.  It was the largest statue in the world when it was built and remained the tallest structure in New York City until the Empire State Building surpassed it in 1929.  So the framework holding the whole thing together was a key issue. 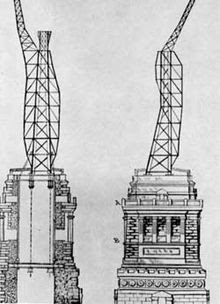 Initially the framework was to be brick, and designed by Viollet-le-Duc, the architect who rebuilt much of France’s historical monuments in the 1800s.  He worked on the head and right arm, but then fell ill and died.  Gustave Eiffel, an expert in wind stress, was chosen to take over, designing the massive four-legged iron pylon and the secondary skeleton that allow the copper skin to move independently yet remain upright.  The statue’s skin was to be riveted to the skeleton with metal straps.  Eiffel used the same principles for Lady Liberty as for his namesake Tower; they take into account movement in the wind, expansion in summer and contraction in winter.  The framework was built and erected in Eiffel’s factory in Paris, then dismantled for shipment.
The statue arrived in pieces on French Steamship Isère on June 17, 1885, and only required reassembly.  But that had to wait until the United States finished the base in April of 1886. 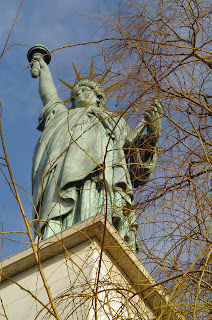 On October 28, 1886, sometime in the afternoon, now President Grover Cleveland - the same person who, as governor, had vetoed funding for the pedestal - dedicated Liberty Enlightening the World.  The festivities included the first ticker-tape parade ever.
By 1984, Lady Liberty was in sad state.  A joint private/public project restored her and two years later the statue reopened in time for its centennial.  Then came Hurricane Sandy.

For many years, including those of my childhood, you couldn’t go up into the flame of the statue because of a weakness in Lady Liberty’s right biceps.  But I’ve been up the spiral staircase into her crown twice.  It’s quite a view!
And like all those immigrants gazing at her as they sailed into New York Harbor, including probably my own great-grandparents, I also gazed at her from the ocean.  But I was sailing in the other direction:  out of the harbor on Le France, on my own journey from America to France.


Not like the brazen giant of Greek fame,
With conquering limbs astride from land to land;
Here at our sea-washed, sunset gates shall stand
A mighty woman with a torch, whose flame
Is the imprisoned lightning, and her name
Mother of Exiles. From her beacon-hand
Glows world-wide welcome; her mild eyes command
The air-bridged harbor that twin cities frame.
"Keep, ancient lands, your storied pomp!" cries she
With silent lips. "Give me your tired, your poor,
Your huddled masses yearning to breathe free,
The wretched refuse of your teeming shore.
Send these, the homeless, tempest-tost to me,
I lift my lamp beside the golden door!"
Emma Lazarus, “The New Colossus”


P.S.
There are other statues of liberty around the globe.  Replicas that is - in Europe, Asia, North and South America, Australia... only Africa seems not to have one.  But more importantly, there are two originals by Bartholdi in Paris, scale models that he made before the final one standing on Liberty Island  in New York Harbor.


- The first, a bronze model, is in the less-traveled southern part of the Luxembourg Gardens and dates from 1870. 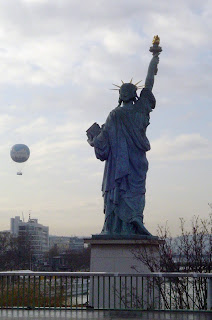 - The second stands proudly in the Seine River on the Ile aux Cygnes, not far from Eiffel’s Tower.  She faces down-river, west towards her sister in America, dates from 1889 and measures 37' 9" (11.5 m). 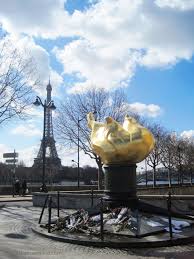 - There is also a life-size replica of the statue’s “Flame of Liberty” which was a gift from the United States for the American Statue’s centennial (1986).  As it stands above the Pont d’Alma car tunnel where Lady Diana died, it has become an unofficial memorial to England’s Princess and is almost always surrounded by bouquets of flowers.

Note:  None of these photos is of the Statue of Liberty in New York.  All are in Paris.  The photos of the flame, Eiffel's framework, and the statue in the Luxembourg Garden are not mine; all the others are.