On the Road: St. Malo on Brittany's Côte d'Armor

It’s Thursday, and I’m off on a road trip.  My old friends Nadia and Christian have moved from the south to a house in Brittany, Christian’s ancestral land.  St. Malo on the north coast, to be exact.  The home town of Jacques Cartier, a name which should ring a bell with North Americans.  Hopefully, at least. 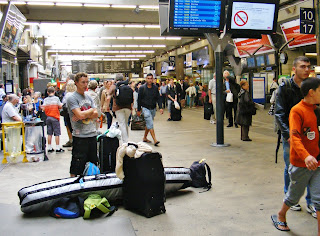 The fastest way to get there?  By train!  Paris has six train stations, each dispatching trains in a different direction. Mine leaves from the Gare Montparnasse, totally across town from Montmartre.  Historically, the Montparnasse neighborhood was rife with crêperies - the staple food of Brittany - and with hotels and restaurants with Breton names.  All because when people left their cherished but impoverished Brittany behind to look for work in Paris, they got off the train filled with Nostalgia for Home and never went any farther.  And so the neighborhood around the train station became known as Petite Bretagne, Little Brittany. 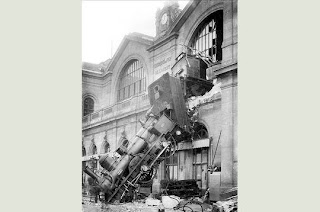 The Gare Montparnasse is also where Nazi General von Choltitz, Germany’s military governor of Paris, surrendered to French General. Philippe Leclerc on August 25, 1944, after refusing to carry out Hitler’s order to destroy the city: “Is Paris Burning?”  But you probably will know it better as the station that was depicted in Martin Scorsese’s movie Hugo.  That was the old station, torn down in 1969, which is also famous for the Train That Didn’t Stop (1895), so no, that wasn’t something Scorsese thought up for his movie.  It really happened. 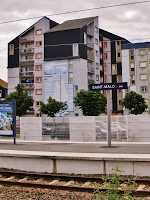 Thanks to France’s TGV super-fast trains, the 417-km (260-mile) trip takes only about 3 hours, at a top speed of 200 mph.  The trip is non-stop and Christian picks me up at the station and whisks me back to a great lunch.  After that, we go down to the port to see his sailboat, one of the main reasons he moved here.  This is a paradise for the sea-inclined, but with tides and winds and rocky shallows that are a challenge to even the best sailors. 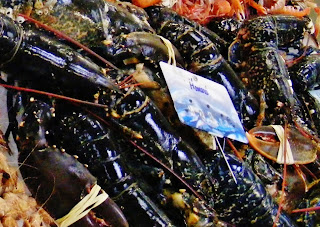 Friday here in the St. Servan area of greater St. Malo is market day, so Nadia and I walk over to check out the goods.  She’s hosting a dinner tomorrow, and she’s very particular about what she serves her friends.  She finds the covered market calm today, and there are indeed quite a few stalls closed, but there’s enough buzz to keep me interested while she inspects the produce.  I have my eye on the lobsters - my particular favorite - but I’m not the one drawing up the menu.  We end up buying enough fruit and vegetables, meat and cheese to feed an army, and our baskets are so full that we radio Christian for back-up, i.e. a ride home.  Which is probably a good thing because it starts to rain. 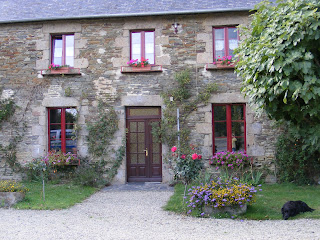 After lunch, and in spite of the showers, Nadia drives the two of us over to visit Le Petit Manoir, a small working farm owned and operated by a high-school friend of hers and her husband and son.  They grow non-GMO wheat and raise no-hormones no-antibiotics dairy cows.  They also rent part of their farm house to visitors, most of whom have come to see Mont Saint Michel over there on the horizon.  Annick and Jean (John) are warm people, he bubbling over with energy, she a quieter soul full of hospitality.  We spend a few hours catching up, over cookies from the Mont Saint Michel bakery nearby and freshly pressed apple juice from orchards down the road.  Jean proudly shows us the new digs upstairs:  the fusty old two rooms, each with bath, have been transformed into an airy apartment with living room, kitchen and bath plus two bedrooms up a spiral staircase in what was once an inaccessible attic. It’s so beautiful I want to stay, especially with the view of Mont Saint Michel beyond the wheat field.  But it’s back to Saint Malo in time to change for dinner intra-muros. 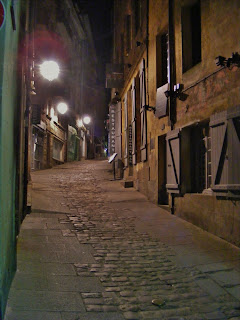 In case you don’t know what that means, it means that St. Malo - being a port right across from England, France’s “hereditary enemy” - is a walled city.  And that has been handy throughout its history.  Unfortunately, it also was handy for the Nazis when they occupied France and so the town was heavily destroyed at the end of World War II.  Great care was taken to build the burnt-out ruins back as close to what they had been as possible... plus mid-20th century modern conveniences. This evening’s party is in the 17th century St. Francis Convent, which morphed into barracks after the French Revolution.  The ceilings are high and their windows don’t look directly into another apartment, a claustrophobic situation that pervades much of the housing inside the walls.  The apartment’s antiques and modern art mix together joyfully, the conversation is sprightly, the antipasti lead into a pasta meal... after which we decide to go out for coffee.  Tonight was supposed to be the Fête de la Musique tonight, but as city hall postponed the music festivities to Sunday because of forecast storms, we only happen upon two groups in our wanderings through the Old Town.  One is a young woman singing love songs to Jesus in a Top Ten voice, the other is a quartet whose lead singer insisted on putting the mike on “Stun” in spite of the reverberations off the walls of the narrow street.  We leave him serenading a group of French people who have decided to do a line dance.  The Univers Café across from the castle proves much quieter and we end up with a nightcap, then walk back through the still busy streets, arm in arm
. 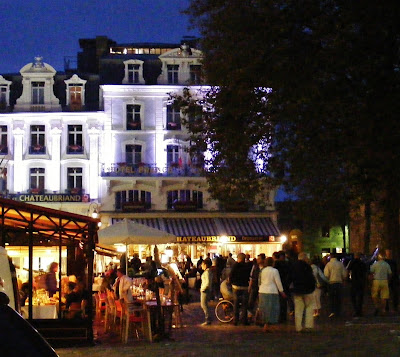 Saturday is mostly spent in the kitchen prepping the dinner for ten guests.  It’s chilly and grey and blustery in the garden, but with occasional dry periods that last up to, oh, half an hour.  A good time for curling up with a good book, and for flowering Nadia’s mother’s grave.  French cemeteries are grim things at the best of times, all stone tombs and gravel walks.  But the roses from her garden seem to catch what little light there is.  That evening the guests keep the spirit gay with laughter and conversations in both French and English.  By the end of the meal, left-overs are rare and quite a few bottles of wine have been dealt with.  Everyone goes home the very best of friends.
By the time Sunday rolls around, I need a rest from my long week-end.  Nadia and Christian have more friends than you could shake a bâton at, and visiting them always involves considerable food and drink.  Nadia fixes me a sandwich for the train, complete with a baggie of cherry tomatoes and a bottle of water, and sends me off with a kiss.  Christian drives me to the station where I get on another TGV train back to Paris, via Rennes and Laval.  All of western France seems to be under cloudy skies but luckily it doesn’t rain until I make it safe and dry back to Montmartre.  The garden is happy to see me, even if it doesn’t need to be watered.  Mother Nature has seen to that for me.  Many times, judging by how wet everything is.
Hopefully next week’s trip to Biarritz will be sunnier.  After all, it is almost in Spain. 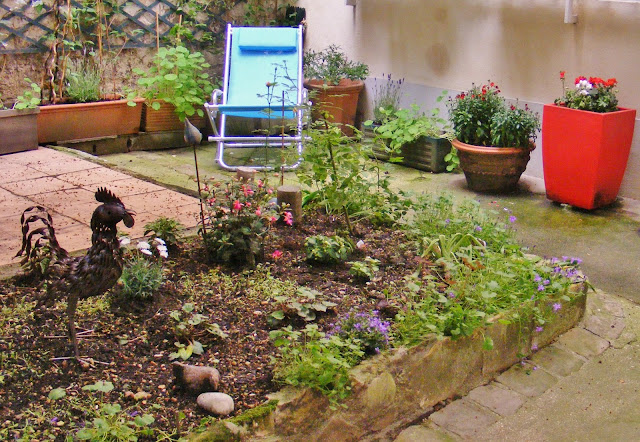