People in the Neighborhood: Le Rémouleur

The side street my building is on is a quiet one.  No through traffic.  My courtyard is quieter still. The walls of the front building absorb the noise of passersby.  All you hear is birdsong...  and occasional conversations or music from upstairs, if it’s warm and the windows are open.
So it got my attention when I heard the bell ringing.
At first, I thought it was the church.  But it wasn’t the right note or the right rhythm... and the wind wasn’t coming from the right direction.  Then I thought it might be on the TV.
And then I realized what it was:  the rémouleur, the knife sharpener.


In the old days, there were many street vendors in Paris.  One of the first to disappear was the water seller, run out of business when a certain Englishman, Lord Wallace, who loved Paris, bequeathed the city the money to build drinking fountains.
There were also vitriers who walked the streets of Paris with a frame strapped to their back, and on it were all different sizes of panes of glass.  The vitrier would shout out “veee-treee-eeeehhh” as he went, and if you had a cracked window, you’d shout down to him and he’d walk up the steps to your apartment - I was four floors up - still with the frame and panes strapped to his back.  He’d measure the window, knock out the old pane and putty in a new one, complete with those tiny nails to hold it in place.  He’d cut a pane to size if he didn’t have one that fit. Sometimes you’d give him a glass of wine with his pay, or just a glass of water, depending.
But the vitrier announced himself with his lungs.  The rémouleur always rings a bell as he walks.  Like the Good Humor Man of my youth (minus the ice cream).  I hadn’t heard one for years and years.

As my knives are a bit dull and I’m not too handy with the whetstone, the bell is a welcome sound.  I jump into my shoes and run out to the street.  But no rémouleur anywhere.  Not to the left nor to the right.  And no more bell.
Just as I’m ready to give up, it starts again.  And then he comes around the corner at the end of the street.  A real rémouleur.
He stops in front of Number 12, rings his bell and waits.  Then rings and waits again.  But no windows open.  No doors.  Nothing. 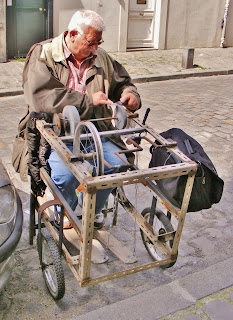 Then he sees me.  And he pushes his little cart down the cobbled street and parks it at my curb.
“Haven’t seen one of you in ages,” I comment.
“There aren’t many of us left,” he replies, matter-of-factly.
“Not many vitriers either,” I add.
“No, the last one retired at the end of the year.”  All these street people have known each other for ages, walked the same routes, crisscrossed the same neighborhood.  “You have knives to sharpen?  Or scissors?”
He waits patiently while I zip back to the apartment to gather up the knives that need his ministrations. 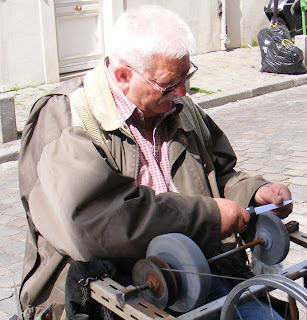 As he grinds them, he talks in spurts.
“I’m 67,” he informs me.  “I’ve been sharpening knives and scissors for 50 years.  And my parents before me.”  My imagination visualizes generations of rémouleurs stretching back well into the 19th century, pushing the same timeless cart but dressed in different styles of clothing.  He says he has no intention of stopping, but may have to if his legs give out.  Or else he’ll just slump over his cart one day. 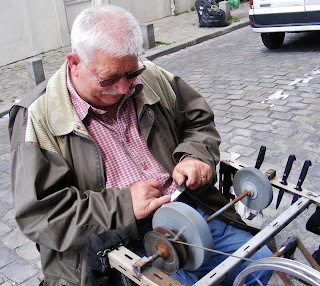 "How often do you come by?" I ask
“I have my customers,” he smiles as he tests the knife’s sharpness on his little finger, then hangs it on the frame of his cart.  Based on his pause in front of Number 12, I’d say he keeps a mental list of each and every building he’s sharpened something for.  Now I’ll be on his list.  One of his stops next time.
Tourists walk by, snapping photos of him, with or without his permission.  But then so do I (after asking if he minded).  Who knows how long this street scene will be around to witness, how long this page of history will survive?
One by one, the knives take their place in one of the cart’s slits.  When all six are honed to his finger’s satisfaction, he says, “That’ll be 54 euros”.
Eight euros a knife.  A store would ask more.  But then, they have accountants to pay.  For all I know, the taxman may not even realize my rémouleur is still working.  Maybe he doesn’t hear the bell as it passes through the streets.
“I’ll be back in September,” he announces.  “No sense coming back before that.”
Then he smiles, doffs an imaginary cap, and sets off down the street, ringing and walking, walking and ringing, until he disappears around the corner.
But I can still hear the echo of his bell. 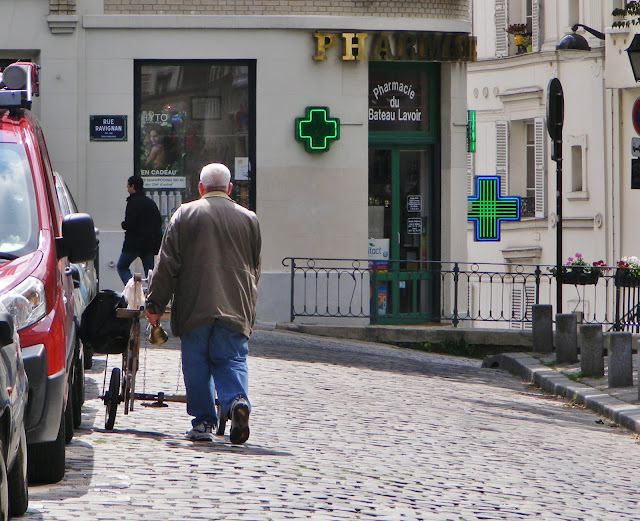