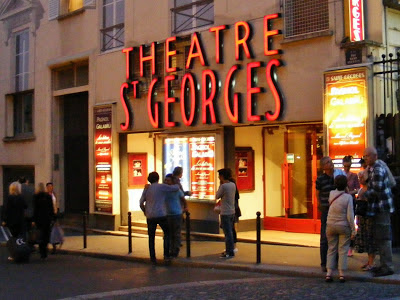 There are moments when it’s good not to be too current with the news.  Otherwise, I would have heard yesterday afternoon that French actor Michel Galabru had died.  And I had tickets for his show tonight.
Luckily for me, it was a hoax.  I’m absolutely sure of that because I just got back from seeing him on stage at the Théâtre St. Georges.  And he was very much alive.  Alive and doing what Galabru does best: hamming it up for the greater joy of the audience.
You may have seen Galabru if you’re a big movie fan.  Lord knows he’s made 250 films.  He usually plays the clown, as in any of the Gendarme series or more subtly in Besson’s Subway (1985), but is totally capable of playing serious roles such as the simple-minded but murderous Sergeant Bouvier in Tavernier’s Le Juge et L’Assassin (1976), for which he won a César (the French Oscar) for best actor.
On stage, he’s done everything from Molière (having been a member of the troupe of the Comédie Française) to Ionesco to Goldoni to Neil Simon.  But tonight he’s starring in a “play” that’s actually a cobbling together of three short stories written by Alphonse Daudet in his late 1800s work, Lettres de Mon Moulin.  All had been reworked by author/director Marcel Pagnol, the first two for a film in 1954 and the last for television in 1968.  The director is someone Galabru knows well:  his son, Jean, who also plays roles in all three... let’s call them sketches. 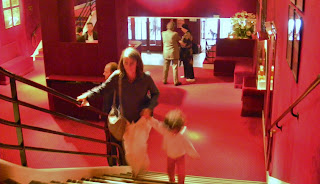 First comes Les Trois Messes Basses.  It’s Midnight Mass on Christmas Eve and Galabru, a priest, is discussing things with his acolyte, who is actually the Devil in disguise.  (This is interjected by the narrator, who plays a role similar to the Stage Manager in Thornton Wilder’s Our Town.)  Galabru’s character has a weakness for good food, especially truffles, and the acolyte/Devil, played by son Galabru, keeps bringing the conversation back to food, and how the lengthy three Christmas masses are going to result in an overcooked midnight meal.  The Devil, I mean acolyte, suggests that he should keep ringing the bell to keep the pace up.  And so it ends in disaster, and the poor priest, who has died by eating and drinking too much, has to explain it all to St. Peter when he arrives at the Pearly Gates.  The sight of Galabru the Younger racing across the stage, ringing the bell, highlights the slapstick quality that lies hidden in Daudet’s tale.
The second sketch, L’élixir du Père Gaucher, has a message that's still relevant today because it concerns corporate greed, albeit at a lower level.  It all starts with the abbot complaining that the Benedictines are rich because of the liqueur they make, but his order is as poor as... well, church mice.  Then in walks arrives Brother Gaucher, back from the funeral of his deceased aunt, who has left him the recipe for her elixir.  As the aunt taught Brother Gaucher not only a whole repertoire of bawdy songs but also how to make the elixir, the decision is made to go into production.  The problem is that Brother Gaucher has to taste each batch to make sure it’s been made right... and that usually ends up with him singing the bawdy songs and doing other things one does when one has tibbled a bit too many drops.  Fearing for the health of his eternal soul, he is ultimately talked out of quitting by the abbot, who has used the profits to refurbish the abbey, as well as by the apothecary, who is getting rich out of marketing the elixir.  This was the sketch I enjoyed the least, and also the one where Galabru’s character was the least outstanding. 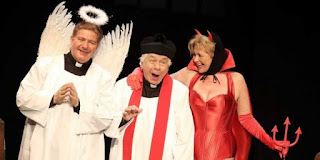 The final sketch, Le Curé de Cucugnan, has become a classic.  Everyone knows it, so the suspense is all in how it’s played.  It is basically a sermon that the curate of Cucugnan gives, a vision he has had.  In it, he first goes to Heaven and asks St. Peter how many of his parishioners are there.  None.  Then he goes to Purgatory and asks again.  Again:  none.  Finally, he goes to Hell... and finds them all there.  Then comes a litany of how each is suffering, and the warning that they will all end up there.  The brave little curate sets up a schedule to hear all of his flock in confession so that by next Sunday they all will be fresh-souled and ready for an eventual visit from the Grim Reaper.  The other three members of the cast appear as the gate keepers of the three nether-worlds, including the Narrator from the other two sketches, rigged out in horns, black tights, red high heels and a sexy red leotard worthy of Pigalle just up the street.  The audience was in stitches, and so was I.  Daudet wrote it well, Pagnol adapted it magnificently, and Galabru played it to the hilt, running the gamut from the hushed confidentiality of a concerned confessor to the blustering hellfire of an Elmer Gantry.  A pure delight that had the audience on their feet as the cast of four took their bows.

All three sketches have a common thread:  Man’s infinite weakness and susceptibility to Earthly Pleasures.  And in all three, Galabru - still verbally spry at 91 - does what he does best:  stumble over words, roll his eyes and make rubbery faces that may be over the top but only when done less well.
If understatement is what you’re after, then Galabru is not for you.  But the spectators had come for Galabru, and Galabru they got. 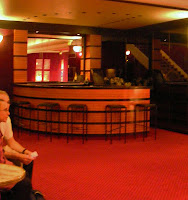 P.S.  If my photos of the theater look familiar, it's either because you've been there or because you saw it at the movies.  This is where Truffaut's Le Dernier Métro was filmed.