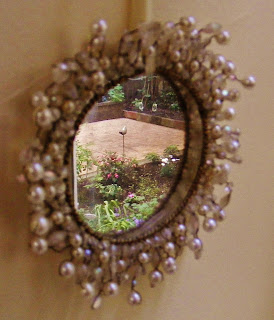 It’s Sunday.  Again.  And that means shopping.
Why Sunday in particular?  Because on Monday everything’s closed.  The supermarket, the smaller shops, even most of the restaurants.  So if you’re hungry and you’ve run low on (fill in the blank), you better get it on Sunday or you’re in trouble.  And Sunday morning at that, because shops close around 1 pm and then you’re left high-and-dry until Tuesday.
As I have no more meat and no more bread and no more vegetables (except for a few of those amazing tiny Bonnotte potatoes from the island of Noirmoutier) and no more fruit and no more cheese... Well, you get the idea.
So I take my money and my shopping bag and my camera - rarely without it - and head out. 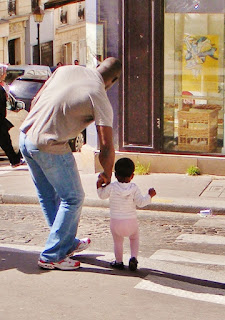 Just around the corner and across the square, I see a very tall father trying to help his son take his first steps on his own.  That’s not easy in Montmartre, where everything is up and down.  Add to that uneven cobblestones and steps.  A child who’s just learning to walk has his work cut out for him.  Especially if everything he sees is wonderment in its newness.  The child takes two steps and points to something to the right, then two more steps and points to something to the left.  A pigeon?  Confetti from yesterday’s carnival?  His father has to bend way over and take his hand before he topples off a curb. 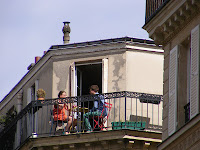 Down the hill a block I look up to marvel at the blue of the sky - something that’s been rare here for months.  I spot a couple enjoying a late breakfast on their tiny terrace perched high above the street.  From there they have a magnificent view of Paris, which is guaranteed to make your croissant and café taste even better. 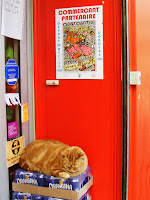 As I round the corner, there’s the ginger cat, taking a nap on a delivery of Orangina.  Almost every small food shop I know that’s run by North Africans - usually Tunisians, and usually from Djerba - has a cat to catch any mice that may wander in from the underbelly of Montmartre.  The owner told me this one’s been known to scratch people who pet him, but so far I’ve been safe.  Must have learned something from the string of cats I’ve inherited over the years.

Across from the cat, La Bascule is just starting to set up for the brunch crowd.  “Brunch”:   a word that’s becoming very popular in Paris.  The couple on the terrace are having theirs in the quiet of their own home.  Not for them, this café which becomes packed and noisy until well past nightfall.  I’m sure the ginger cat goes inside when the crowd starts to arrive. 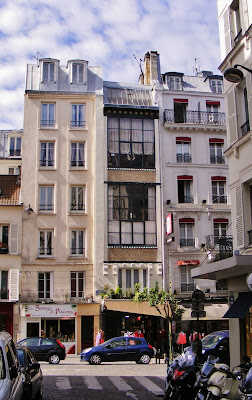 At the foot of the street stands a building that has always fascinated me.  It probably dates from the 1920s and must have been built by a patron of the arts, because it definitely wasn’t built as a rent magnet.  There’s a shop on the ground floor and an apartment just above which usually comes with the shop, definitely cutting travel time to work.  All the rest is artist’s studios, and few artists could splurge on rent.  In spite of the building being only one large room wide, these ceilings tower two stories high - enough height to accommodate a monumental canvas.  There are two studios, one on top of the other.  And at the very top, a shorter studio for a more impoverished artist, but still with its wall of windows.  The reason I know these are artist’s studios is that the windows are facing north... and because it’s Montmartre, the haven of artists:  Jongkind and Pissarro first, followed by Renoir, Degas and Monet, then joined by van Gogh, Toulouse-Lautrec, Matisse, Derain, Valadon, Utrillo, Modigliano... and Picasso until he deserted the hill to move across town to Montparnasse.
I drop by the butcher’s to buy a veal chop.  As they prepare it for me, chopping it with noisy gusto off of a whole row of ribs, they make small talk, asking me what I’m cooking to go with it.  That might be nosy in other countries, but this is France and in a way they’re sizing me up to see what kind of culinary stuff I’m made of, and whether it’s The Right Stuff.  If it is, you move up a notch in their esteem and they become even more friendly.  All part of the initiation process. 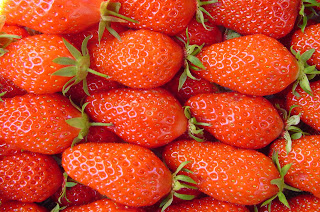 On the way to the green grocer, I pass a man begging.  He’s young and has two little girls with him.  As it’s the week-end, that may be because he has no one to babysit them. Or he could have just borrowed some children to gain Pity Points, which is common.  But as the girls aren’t being made to beg, just to behave in spite of their obvious boredom, it’s probably the former.  At the grocer’s, I buy the fruit and vegetables I need for a few days... and get a small basket of strawberries that I take back to the girls.  The young man looks a bit confused.
That leaves only the cheese shop.  It changed hands this past winter, and everyone wondered whether the cheeses were going to be as good as before, and the staff as friendly.  Well, the cheeses are a bit different, it’s true, but of the highest quality... and a wide variety.  The staff is quite friendly and very knowledgeable, although some ladies among the customers miss the cute young man with the long hair.  I select a fourme marinated in muscat wine (which turns out to be delicious!) and a basque goat cheese dusted with rusty-red paprika and piment d’espalette so it’s sure to have some zing to it. 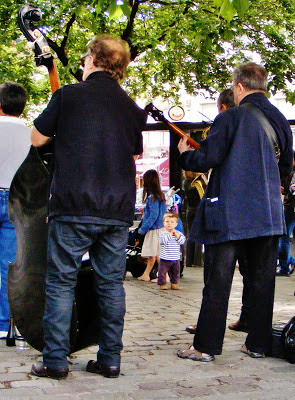 On the corner, just before the street starts its gymnastic climb to my street, the Sunday Morning Concert is under way.  Every group seems to have its corner or its square as well as its schedule.  If it’s Sunday morning and it’s the Abbesses bus stop, it must be the New Orleans jazz quintet.  They play and sell their CDs and advertise for gigs, much to the enjoyment of all, especially the youngest of their audience.  Dancing has even been known to ensue.

When I reach the top of the steep hill, I drop into Christophe's bakery to pick up a baguette.  Through his window, I spot a young lady sitting on the steps to the square.  She was already there when I set out, and her book seems to be much further along in its reading.  I wonder who she’s waiting for and why he/she/they are keeping her waiting.
A nod to the accordionist in passing and I’m home.


And that’s what it’s like to go shopping in my neighborhood.  It involves food, of course.  But also a whole way of life, with its cast of characters 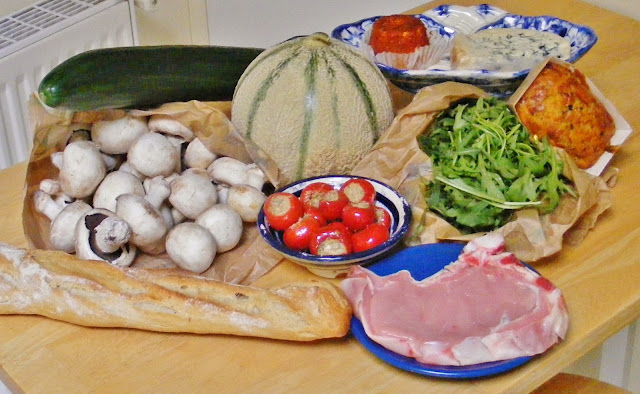