Out and About: Events/Exhibits: Macchiaioli

Boudin, Monet, Degas, Renoir, Sisley, Morisot, Pissarro...  Over the years I’ve gotten pretty good on the French Impressionists.  Then an Italian friend in Paris asked me if I’d seen the show at the Orangerie:  The Macchiaioli.
Not only had I never heard of them, I couldn’t even pronounce it.  So in case you’re not any more gifted than I am, I’ll help you out.  It’s pronounced “mock-ee-aye-oh-lee”.
My friend explained that they were the Italian Impressionists, and that the name comes from the word “macchia” meaning “stain” or “blot”.  (It’s easier in French because “tache” means both.)  It also means a wild forest of the Mediterranean variety.  So the inference was two-fold:  that the Usual Rules didn’t hold, as they don’t for the trees and plants that grow wild, and that the people and things represented were often reduced to alternating patches of color and chiaroscuro. 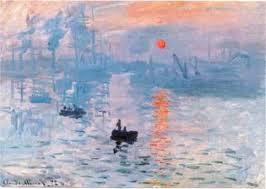 The Macchiaioli period ran from 1850 to 1874, a period marked in Italy by the political upheaval of Garibaldi and Italian Unification.  French Impressionism began later with Monet’s sunrise in 1872, although his precursor, Boudin (see June 5, 2013), held his first exhibit in 1859.  So it’s not a stretch of the imagination to say that they were more or less contemporaries.  And both were a reaction against the neoclassicism and romanticism of their time.
Interestingly enough, Macchiaoli in Italy was initially used as a term of ridicule, as was the term Impressionist in France.  When Monet painted and exposed his “Impression, Sunrise”, a critic decreed that it wasn’t a painting at all, merely an impression, and “less finished than wallpaper”.  Neither art movement was taken seriously. 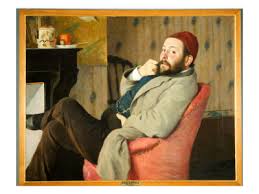 Upon entering the exhibit you’re greeted by two portraits of art critic Diego Martelli, a round-cheeked, cheerful-looking man who became the patron of the movement and housed the artists willingly at his country home in Tuscany, the center of the Macchiaioli movement.  Around the corner from Martelli’s portraits, the first paintings demonstrate more of a gradual slide out of romanticism, with little that’s new, except perhaps the vividness of the sky and its light. 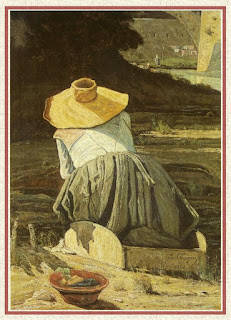 Gradually the approach changes, lines blur and light comes front and center.  Landscapes and scenes of rural life were main themes of this movement.  One particular canvas depicts a washer woman viewed from behind.  She is bent over her work and the mastery of the folds in her ordinary clothing are nothing short of genius.  Then I learned it was by a Frenchman, Paul Guigou, and it was there because of the similarity in subject and approach to light.  I’m not sure that’s a valid reason, but it was beautiful to see.

Across from it was a horizontal landscape, a shape of canvas the Macchiaioli used often.  It was by Raggaello Sernesi and called “Romito Point seen from Castiglioncello”.  Rocks and grass divided the cliff scene diagonally, with Romito Point in the background and a cobalt blue sea between them.  You had the impression that if you only stood on your tiptoes you would see what was just over that cliff... a beach perhaps, and maybe even swimmers.
In the next room was another horizontal canvas of a couple sitting on the banks of a river, relaxing in the shade of large trees.  A boat is tied up at the bend in the background.  It looks for all the world like the Vienne River bank in Chinon.  The man is sitting with his legs over the wall, fishing; the woman is sitting behind him, waiting patiently.  It’s called “The Honeymoon” although the only thing romantic about this couple is that she has managed to take his hand that’s not holding the fishing pole.  Whether that is the conception of marriage all’italiana in 1862, or only artist Telemaco Signorini’s impression of it I can’t tell you. 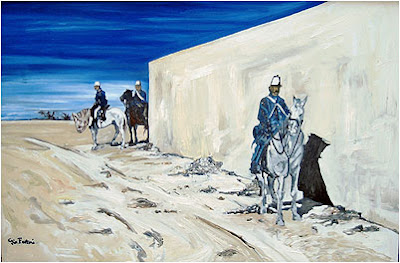 The War Room was my least favorite because war is bad for children and other living things, as we said during Vietnam.  I preferred the Macchiaioli’s other pet topics:  rural and domestic life.  But even among the saber-rattling and carnage of this room, I found two canvases that attracted my eye.  One by Giovanni Fattori is of a group of soldiers.  They stand, paired off by twos, packs on their back, awaiting orders from their chief, the only person looking out from the canvas   The other painting was the famous “Sentinel” by Giovanni Fattori, with its stark diagonal lines, darkly oppressive sky and three horsemen, one standing guard all alone.  The harshest of all the paintings was Giovanni Fattori’s soldier being dragged across a bleak countryside.  The sky is slate grey, all grass is gone and all the trees have been cut down.  The soldier’s foot is caught in the stirrup and we don’t know if he’s dead or dying, but his fingers rake the ground, leaving a trail of gouges and blood.  To me, it embodies the senselessness of war, even though the Macchiaioli artists painted such canvases as their contribution to their country’s effort toward unification.  To prove it, a portrait of Garibaldi by Silvestro Lega keeps watch just opposite.

The last room is mainly portraits.  One in particular - “Portrait of Nerina Badioli” by Antonio Puccinelli - could be a movie star of the 1930s or 40s rather than the 1860s.  Another might be Oscar Wilde, although the title says it’s just “a young man”.  In spite of its loud wallpaper background, my favorite was by Giovanni Boldini... quite compelling for the sadly brooding eyes of model Mary Donegati.
And then, just before the exit, a montage of scenes from Visconti’s “Senso” loops constantly across the entire end wall.  Why?  Because the story takes place during the Macchiaioli period and the struggle for Italian Unification (Risorgimento), neatly tying together two essential threads of the show.

The exhibit is downstairs, below Monet’s Water Lilies rooms, and shares the space with the museum’s permanent exhibit - which is well worth a trip in and of itself. 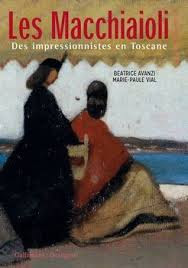