Out and About (Events/Exhibits) - Marc Chagall

When discussing art, there’s an old expression:  “I’m no expert, but I know what I like”.  Personally, I feel that, in things artistic, it’s difficult to like something if you don’t understand it.  Maybe you don’t have to be an expert, but it helps to understand what you’re looking at.
Chagall has always been a mystery to me.  Which may be why I’ve never particularly enjoyed his paintings.  But when the Musée du Luxembourg hosts a retrospective of his works, it seemed normal to give it a try.

This exhibit is chronological, opening with some early works that focus on his beloved wife Bella.  Chagall’s later style isn’t obvious in them yet, but his mastery is.  My favorite of these few was a portrait of Bella and their newborn daughter Ida at a window overlooking the fields of what I’m assuming is his native - and also beloved - Russia.  It’s somewhat reminiscent of a subtler Klimt, especially in the placement of Bella’s head, or a pre-cubist Picasso.
Then you turn a corner and you find yourself in a totally different world.  War has raised its ugly head, as it did throughout Chagall’s life:  World War I, the Russian Revolution, World War II.  The walls and display cases are filled with pen-and-ink drawings of wounded soldiers, people fleeing... nightmares that followed him until he settled on the French Riviera at the end of his life and the colors came flooding back in with the sunlight.
The following rooms are filled with works revealing Chagall’s two main themes:  religion and his Russian-Jewish culture.  Those are the themes that explain his work... if you can unravel his dream images and surrealistic symbolism.  You see again and again the figure of the Wandering Jew, often floating as in a dream.  André Breton called it “a magical world” that Chagall paints, and perhaps even a sort of psychoanalysis through art.
In the forty gouaches illustrating the Bible, researched during a visit to Palestine, you see artistic proof of Chagall’s auto-revelation:  “In the East I found the Bible and part of my own being.”  It seems a strange admission and a strange visual for a deeply Jewish artist until you remember that the Old Testament is shared by Christians, Jews and Muslims alike.  But beyond the Old Testament, Chagall ventures into the New, constantly depicting the Crucifixion.  That too seems paradoxical until you realize that his Christ on the Cross is really the symbol of all human suffering, the theme that runs through most of his later works.
By the end of the exhibit, I felt I knew more about Chagall.  The darkness of his works , I now understood, is part of the brooding sadness so many Russians, especially Russian émigrés, translate into their works, be they paintings, novels, music or poetry.  The violins, the flying men, the goats are all part of his symbolism of Mother Russia.
And then there’s Bella.  Bella with their child, Bella in a wedding dress, Bella as madonna...  It’s all there on the walls.  Take the autoguide and it’ll help you understand why Chagall is one of the masters of 20th century art.
When you’re done, go to the Paris Opera House and look up at his ceiling fresco of music and dance.  It was his gift to the city that took him in, welcomed him, the Russian refugee, wandering Jew, and struggling artist. 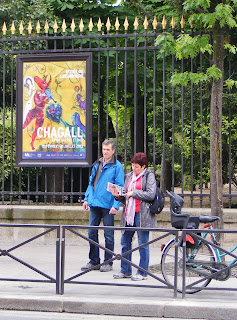 
For a view of Chagall's fresco at the Paris Opera House:
http://www.youtube.com/watch?v=z8lNjQTwTU0