When one changes continents, there are many things that also change.  If that change is to Europe, more specifically to France, cuisine is one of the major changes.
At least it was.  Even that is changing.  Unfortunately.
Luckily I've managed to transmit that love of and respect for cuisine to my children, and through them to the next generation.  That makes me happy.
People ask me what makes a French meal.  How is it different from a meal in America?  So I'll try to tell you. 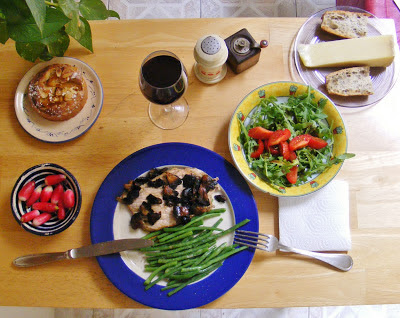 The above is a five-course meal.  (It so happens it was Sunday, and lunch, which used to be the major meal of the day in France.) 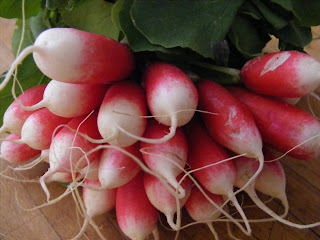 The starter (which the French call the entrée - the entry into the meal - and not the main course as in America) was radishes.  I bought a whole "bouquet" of them at the green grocer's, as much because they were a bright splash of color in a grey day as anything else.  The French serve them with butter and salt, but after I cut off their greenery and their "tail", and washed them in cold water, I couldn't help but nibble them one by one as I made the rest of the meal.
There’s something calming about shelling peas or cutting the ends off of green beans.  Especially with some good music playing in the background.  These were the kind Americans market as “French beans”, which I take it means very thin, and they'd been on sale "because it's Mother's Day."  As I trimmed them, the mushrooms for the veal scallop were sautée-ing themselves and the water for the beans was coming to a boil.  The veal was from France (the origin is always marked) and has no hormones or antibiotics, which are both illegal in France.  In addition, many calves are left to gambol in the field and suckle their mother, but those little fellows cost a bit more - understandably.  The butcher serving me had asked me how thin I wanted the scallop cut and we settled on medium (all part of the service).  That meant that it took the same time for the meat to brown on both sides, without cooking the life out of it, as it did for the beans to cook yet remain croquant sous la dent (crunchy under the tooth).
After that in France comes the salad.  I added a touch of Americana with the tomato, again for color, because a French salad for this course would be just that:  only a salade, meaning some form of greenery, in this case roquette (arugula).  At the green grocer’s, I'd asked for only a fistful and he didn’t flinch or gripe.  That’s something I like here in France:  you can buy small quantities, fresh, and no one minds.  That way there’s nothing thrown out because it’s gone bad in the fridge.  With a little homemade vinaigrette, the salad was delicious.  And making it yourself is easy and quick, plus inexpensive and better for your health.  You can always make extra and keep it for several days, even outside of the fridge. 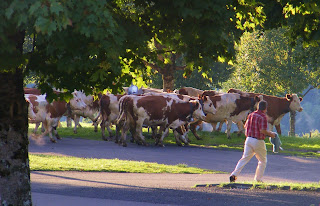 Then comes the cheese.  This particular one is from a neighborhood shop specializing in products from the Auvergne region of the Massif Central.  It’s a Laguiole (pronounced lah-yul) from Laguiole, the same town that makes the knives which have become all the rage in the States.  The cows are taken up to the hills in late spring and left there until September.  So this cheese is a seasonal product of the summer.  That’s why every bite tastes of flowers and fresh grass... to which no pesticides are applied because no one farms that area.  The cows keep the weeds down and everyone’s happy. 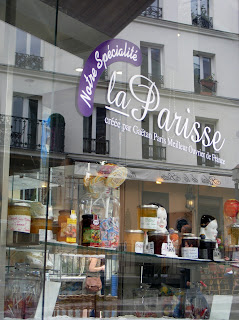 Last comes dessert.  And with a pâtisserie just around the corner, it’s amazing I don’t return to America two waist-sizes wider.  Christophe (see blog Sept. 14, 2012) is a wonderful pastry chef, but a large share of Christophe’s clientele is tourists on their way to or from the top of Montmartre, so he only makes big cakes sur commande (upon request).  Still, that leaves a good selection of pastries to choose from.  I hesitated between a fondant au chocolat (chocolate lava cake) and a peach tart... so I took both.
After all, there’s always tea time.

P.S.  All this took only a half hour to prepare and cook.  And all very healthy.  Except maybe for the tart, although it was made with fresh peaches, so...