The 67 bus, the mosque and other memories 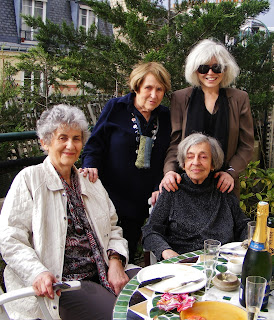 It’s Kate’s birthday and I’ve got a bottle of white wine, as requested, plus some chocolates.  To get to her party across town, I decide to take the 67 bus.  It’s slower than the métro, but no need to change, and it lets me off at Kate’s building.
The 67 starts out from Place Pigalle and cuts across all of Paris, north to south.  It offers quite a show.  The Louvre...  Notre-Dame...  City Hall...  the Seine...  I have a book, but it’s hard to focus.  This city represents half of my life.  Probably the better half.  It’s where my children were born and raised.  It’s where I had my career.  Memories can't help but float to the surface as the neighborhoods flow by.
One neighborhood we pass through came into my life again and again.

When I arrived in France, I knew no one.  I had the addresses of two strangers in my pocket, friends of friends.  That was all.  No job.  No apartment.  But at least a return ticket... just in case.  Someone who believed in me had given me that ticket.  “Keep your money.  You’ll need it for rent and food and all the rest.”
The need for a roof over my head was immediate.  Hotels were expensive.  One of the two strangers, Thérèse, found me a reasonably-priced hotel near her in lower Montmartre.  It had a pub on the ground floor, within shouting distance of the front desk.  There were several ladies in the pub who befriended me.  They were there every evening, as of about 5:00.  Only much later did I find out why.
The other stranger, Alain, helped me find an apartment.  My experience with renting was limited.  And in English.  This was Paris.  Alain could spare one day.  One.  No more. He went over the want ads and narrowed it down to two apartments.  One was in the 15th arrondissement, the other in the 5th, in the very heart of what had been Paris from its beginnings.  We started with that one.
I don’t remember much about that apartment.  In fact I couldn’t tell you where it was if my life depended on it.  I remember only that it was at the Censier métro stop, right around the corner from part of the Université de Paris.  And from the Paris Mosque, which was something that lay very far outside the boundaries of my world back then.
For some reason I didn’t take that apartment.  Probably it was too dark or too small.  Or the whole experience was just too overwhelming.  So we moved on to the other one, and I lived there for a year.  During that year I studied at the Sorbonne, where - surprise! - some of my classes were in the university building by the mosque, just around the corner from where I could have been living.  Round One.

Fast forward two years.  I’m now a teaching assistant giving a course called Civilisation Américaine at the Université de Paris.  I’ve been back to the States for a year to get a master’s degree and this time I’ve arrived in France with no job, no apartment, no return ticket and only $100 in my pocket.  But I know the ropes a bit.  I’ve been through this before. 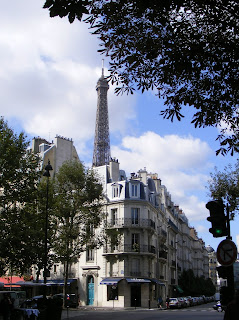 I end up in an eighth-floor walk-up chambre de bonne (a maid’s room) near the Eiffel Tower that costs me over a third of my pauper’s salary for one tiny room with a cold water tap and a Turkish toilet, both in the hallway and shared among all us students and immigrants on this top floor.  The classes I teach are at Censier, that college around the corner from my almost-apartment, the same college where I once was a student.  Round Two.
My students are not that much younger than I am, but they’re interested in America, even though it’s a hard sell to convince them that “American” and “civilization” are not an oxymoron.  As the months go by, the two classes - one following the other - fuse to make a single two-hour class.  We move it from remote Censier to a café just down the street from the central “campus” near the Luxembourg Gardens.  I’d read that Sartre did that - held class in a café - and it’s more convenient for the students.  They begin to bring friends along, including a Black American musician.  I break a lot of unspoken rules but my students improve their English by leaps and bounds.  My contract is not renewed.

Fast forward another ten years or so.  I now have a profession that I’ve fallen into - not the one I thought I would have - and two lovely dual-national, multiracial children in a bilingual school by the Seine.  We live in Montmartre.  I drive them across town to it every day.
At the end of the school year, one of the teachers decides to start his own school, one still “arty” but without all the “curtsey-and bow”.  After looking around, he settles on an old garage that can be repurposed.  And of course it’s right around the corner from that mosque and that department of the Université de Paris... and the apartment where I could have lived but didn’t, wherever that was.
Censier.  Again.  Round Three.
Every school day, we travel from our home on the hill of Montmartre to this neighborhood across town that has kept remembering itself to me.  We do that for years.  By car.  By métro.  And yes, by the 67 bus.  Finally my children do it by themselves... by which time this neighborhood has imprinted itself on a second generation.

The birthday party over, the oysters washed down with champagne, my 67 bus races the sunset across Paris in the late dusk of summer.  Muted lighting on the buildings etches them against the sky.  This city is heart-wrenchingly beautiful at nightfall.  It takes your breath away.
Once again the bus passes the corner where the mosque stands across from the college.  And I smile.