Who Are the People in Your Neighborhood: Au Verger des Abbesses 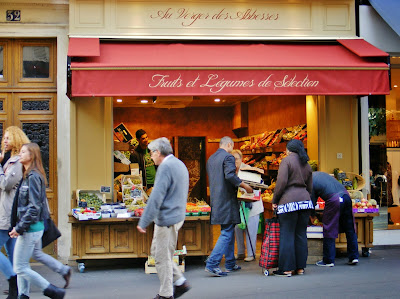 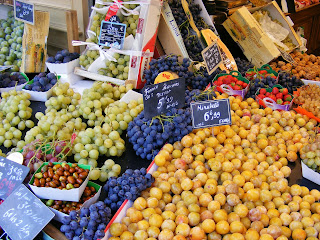 Every neighborhood in Paris has several butchers, several bakers, several wine shops... and several green grocers. When you move into a new neighborhood, it takes a while to compare them and pick your favorite, the one you feel is the best.  It doesn’t hurt if the shopkeepers are friendly.  They might even be cute (and here I’m thinking of a particular local cheese vendor).  But what cuts the mustard is what they sell.  The selection.  The quality.  And of course the price.  People are prepared to pay a bit more - if they can - provided they feel what they’re getting is better quality. 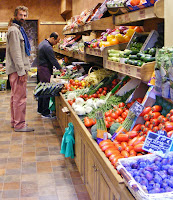 Only two blocks downhill from my place in Montmartre is the rue des Abbesses, the quintessential shopping street.  Ever since I moved to this neighborhood many decades ago, it’s been a hive of activity.  Lately there’s been a closing of small businesses - food and services mostly - and their takeover by clothes stores and shops selling accessories to the Beautiful People who have gentrified the area:  shoes, bags, jewelry... 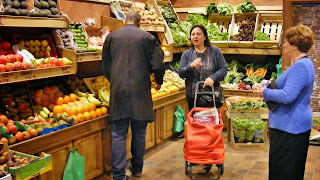 Yet it doesn’t matter how pretty you look if your stomach is growling, and so there's still a choice of food shops. Especially green grocers.  In New York, they tend to be Korean or Latino, depending on the neighborhood.  In Paris, they are most often North Africans... usually Tunisians... and even more specifically Tunisians from the island of Djerba, like the owners of Au Verger des Abbesses.  I asked "why Djerba" and Tafouik replied, without skipping a beat, “Parce que nous sommes des commerçants” (because we’re shop-keepers).  I asked him if there was anybody left in Djerba and he just chuckled.

Of the three green grocers on these two blocks of the rue des Abbesses, mine is the one closest to my house.  It’s wedged between the deli and the cheese shop (see above), kitty-corner from the wine shop (see People in Your Neighborhood - Caves des Abbesses, Feb 22, 2013) and close to the bakery with the pain aux céréales (fresh multi-grain bread baked right there).  Why did I choose that one?  Just look at their lettuce and their tomatoes, two good Revealers of Freshness (or the lack thereof)... as good a yardstick for quality as I’ve ever found.  Nothing worse than wilty lettuce or tomatoes with soft spots!  And here, the fruit and vegetables are always fresh as can be.  And there's a wide selection.
This shop wasn't always a green grocer's though.  Fruit and vegetables moved in only 13 years ago, at the turn of the century - Y2K.  Before that it was a butcher shop. The new owners transformed it on a budget, with as little work as they could manage.
Business has been good for quite a while now so they redid the entire store this past summer, taking it down to bare bones.  They made it bigger by minimizing the storage area in the back, even installing a sliding door to cut down on wasted space.  They traded in the tired old mustard wall tiling and grey mosaic floor left over from the butcher’s time and installed warm brown tiles on both walls and floors.  The harsh old neon tubes have been replaced by trendy recessed lighting.  There’s new wooden shelving instead of the old DIY shelves, and beneath it the storage space once hidden by green curtains now boasts handsome wooden doors with molding.   The front of the shop is equally handsome, with the same cabinetry as inside instead of the old plasticized plywood look, and there’s a brand-new fire-engine red awning to replace the tired, drab old green one.  Not to mention elegant lettering on both awning and storefront.

The wonderful thing about such small shops is that you can buy just one apple and no one gives you any lip. You can ask for juste une poignée (just a handful) of mushrooms or spinach leaves and you don’t get The Look.  They’ll weigh just as much or as little as you want.  They know you’ll be back.  And they’re used to it because the neighborhood has a lot of little old people - holdovers from Montmartre’s former working-class era - who can no longer carry armloads of stuff up four flights to their apartment.  Not to mention that, in general, French fridges are smaller than their American cousins by a long shot and can hold far less. Besides, everyone wants things to be fresh, so you buy for today and tomorrow and maybe the day after. After all, you walk past the shop every day.

Another advantage is that you can ask them to get something for you.  For instance, in the spring, when I arrive, I have to replenish my herb garden.  The bay leaf bush will be fine, but other herbs are annuals or may have taken a hit over the winter.  I ask them to see if there’s any potted basil or verbena or thyme and they take a look around the huge Rungis market the next time they restock, which is three to five times a week, depending on the season... and on business.  And for seasonal things like morels or delicious melons de Cavaillon cantalopes, they’ll give me a heads-up when they’re expected in.
Last, but not least, they’re always friendly.  I’ve never seen them in a bad mood or shouting at each other.  More often than not, they’re teasing one another.
I always joke with them, so they like me.  I find it makes the day go faster if people smile at you.  And their days are very long - open six days a week, from 7 in the morning to 8 at night, and they don’t even close for lunch like so many other food shops do.  Smiling also gets me such perks as a free head of lettuce from time to time, and once they sold me morels at half price - morels! a whole kilo of them!  (Of course that was their last day before the work started and the place was to be gutted, but still, they could have saved them for someone else.)  There’s always a candy for the little children, sometimes to the parent’s chagrin.  And for the elderly and certain other people they like - or maybe everyone - they’ll deliver if you’re loaded down already but still buy an armful of fruit and veggies.

They keep tabs on me, noticing when I’m gone.  And over the years, I’ve seen the young men who lend a hand on busy week-ends (maybe sons or nephews?) grow out of their acne and into polished professionals.  When I arrive from the States, they welcome me back.  We all shake hands and they ask about my family, and where I’ve been.   When they know I’m headed off again, they wish me a good flight.
For all these reasons, a stop at the Abbesses Orchard (Verger des Abbesses) is part of my Paris routine.  A delicious part.

P.S.  I forgot another innovation:  bees!  While I did my shopping the other day, Samyr was busy swishing away the bees from his fruits, especially the Damson plums known by the Alsatian word quetsches in French.  He told me, "I don't know where all these bees are coming from.  They were never around before."  When I told him about the two places higher up on the slopes, and only a few blocks away, that now have beehives, he said, "That explains it!  Mystery solved."