Out and About: Exhibit: Angkor Wat 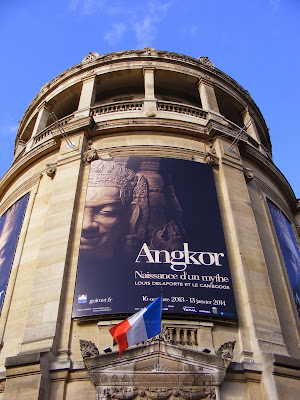 I have a Bucket List.  I suppose everyone does.  At the top of that Bucket List is Machu Picchu.  Right below it is Angkor Wat.
But flights to those two destinations are expensive and long.  So those exotic places are going to have to wait a while.  Which is why, when I saw there was a show about Angkor here in Paris, I got out my subway pass and I was off to the 16th arrondissement and the Musée des Arts Asiatique Guimet.

Guimet’s collection covers artworks of just about any Asian nation you could name - from India, Afghanistan and Pakistan to Japan and Korea, from the Himalayas to Vietnam.

After all, France was one of the three great colonial powers of the past, alongside Great Britain and Spain.  A huge swath of southeast Asia flew the French flag under the name Indochine (Indochina):  Vietnam, Laos and Cambodia.  In addition, Louis XIV, the Sun King, had also built trading settlements in India:  Mahe, Chandernagor, Pondicherry, Karikal and Yanam - names all French children once had to learn in grade school.  So what could be more normal than that Asian art, at least from these areas, should find its way into French museums and private collections? 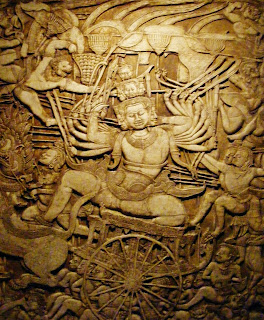 I’m not sure, but I think the first time I heard of Angkor Wat was in college.  As a French major, I was subjected to an inordinate number of Gallic books, one of which was André Malraux’s La Voie Royale (1930).  In it, the “heros” penetrate the Indochinese jungle to steal bas-reliefs from ancient Khmer temples.  And the author should know about that, because Malraux himself went to Cambodia in 1923 under the pretext of taking molds of Angkor Wat for the self-same Musée Guimet and instead sawed off statues and bas-reliefs with the intention of selling them to collectors he had already contacted.  He was arrested in Phnom Penh and sentenced to over a year in prison, but his wife rallied the French intelligentsia who put so much pressure on the government that he was released after only three months.  In spite of that buccaneer-ish start at age 23, Malraux nonetheless ended up as Minister of Culture in the DeGaulle administration and his body now reposes in the Panthéon alongside other great intellectuals such as Voltaire, Rousseau, Hugo, Dumas and Zola, as well as Marie and Pierre Curie. 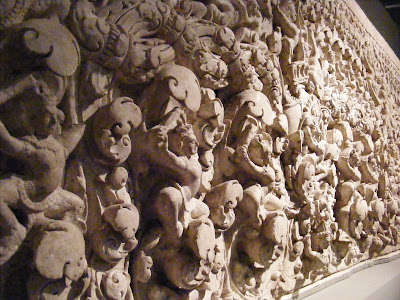 But I digress.  Back to Angkor Wat.
I meet a friend in front of the museum and we find the temporary exhibit on Angkor, which is on the downstairs level.  Much of it consists of drawings made by a certain Louis Delaporte, who must have ruined his eyesight on them, judging by his meticulous renderings of the ornate temples.  All those tiny lines!  Amazing!  Not one is missing.  How can I tell?  Because near the drawings are the actual molds taken of the bas-reliefs during the expedition.  And it’s a good thing those molds were cast, because between Malraux and other art marauders hacking off parts of the decor, and later the Khmer Rouge using the statues for target practice during their deadly occupation of their own homeland, not to mention erosion from centuries of monsoons and fractures caused by the roots of sprouting trees and vines, there’s not a whole lot of original detail left today.

In addition to Laporte’s drawings and the moldings, there are also actual statues from the 10th to the 13th century, some ornate, others touching in their simplicity.  I’m not terribly familiar with the culture of Cambodia and not knowledgeable enough to recognize which of the gods is which.  But there is so much to see in the bas-reliefs, and such beauty in the simple busts, that it doesn’t matter.  The flow of the lines carries the eye from one detail to another. 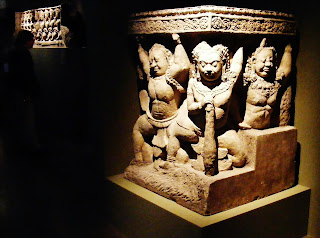 A quick look at some of the literature explains to visitors that Angkor Wat was first a Hindu temple dedicated to Vishnu, then later a Buddhist one, which explains a bit of the dichotomy of the gods depicted.  It was built by the Khmer King Suryavarman II early in the 12th century, which makes it even more amazing that anything at all has survived, given the threat of encroachment by the surrounding jungle.  It’s the largest religious monument in the world, and has become the emblem of Cambodia, even featuring on the national flag. 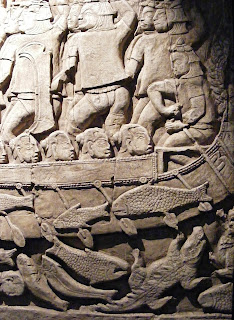 It’s amazing that we can stand here today and look at these vestiges, because the moldings were stored for decades in the damp cellars of St. Riquier Abbey near Abbeville in the marshy Somme region well north of Paris.  The exhibit’s experts found over 1,000 molds stacked in such a way that picking any of them up was like playing a gigantic Pick-Up-Sticks game ( Mikado in French) where moving one might well damage the others around it.  After that, the pieces had to be assembled like some vast and intricate jigsaw puzzle.  But the result is amazing.  I find my hand keeps creeping out, wanting to touch them, but I don’t dare
The show also flows over into other Cambodian temples, such as the one at Bayon famous for its huge Buddhist heads looking to the four corners of the universe, with even more Asian art treasures above on the other floors.
The Guimet Museum first opened its doors in 1889 and houses the largest collection of Asian art outside of Asia.  It’s well worth a visit.  Plan to stay a while. 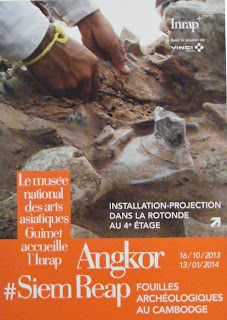