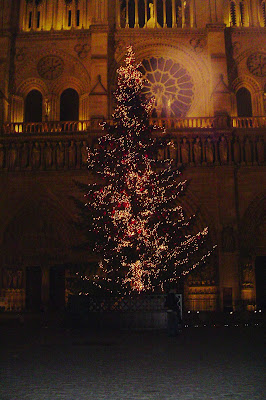 Joyeux Noël!
Christmas in France is a family affair, and the big meal is served Christmas Eve, after Midnight Mass.  Or it used to be.
Nowadays it’s often served, as in America, on Christmas Day after the presents are opened.  The traditional dessert is a bûche, of many different recipes, all of which are complicated to make.
Christmas also means candied chestnuts (marrons glacés), but above all chocolates.  Some of my favorite memories are of hours spent watching pastry chef Bernard Bertheau make them himself in the basement of his shop in Montmartre.  It was cramped by modern standards, and a lot of the equipment dated back to his start in the trade sometime shortly after World War II.  But it was brightly lit and spotlessly clean.  I would pick my way down the narrow, winding stairs and hear him moan “Oh non, l’Américaine!”... with a big smile on his face.  Monsieur Bertheau loved to tease and he adored anyone who shared his passion for pastry and chocolates.

I never failed to be amazed by the speed and sureness of his movements, and by how he always knew when the melted chocolate was too cold to work.  He’d pop the tub back in his huge pastry oven for just a few seconds, pull it out, stir vigorously, drop in almonds or candied orange peel, then take them out one at a time, stuck on his fork (making that trademark three lines on the chocolate coating) and leave them to cool on the marble work surface.  He was proud of his handiwork, and I think he enjoyed “catching” me pop one into my mouth.  I’ve never tasted chocolate so good!
One day Monsieur Bertheau retired and sold the shop.  I inherited some of his vintage chocolate molds, but so far I haven’t screwed up my courage to try using them.  His act is just too hard to follow.  I visit him and his wife in their new home in their native Loire region.  It’s been almost twenty years, and he hasn’t made a pastry or a chocolate since the shop closed.  But then I guess he made enough of them in his fifty-year career to last a lifetime.  Still, I wish he would.  And invite me.

There are as many recipes for mousse au chocolat as there are cooks.  Light and fluffy with milk chocolate, heavy and creamy with dark chocolate... With or without liqueur.  And everyone likes their own best.  This is Monsieur Bertheau’s version which is easy and fast to make.  I hope you enjoy it as much as I have. 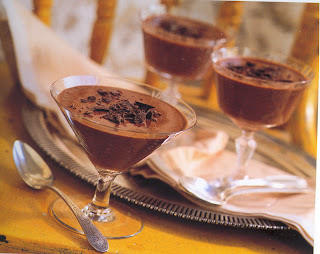 - Select a 2-quart stainless steel bowl and a saucepan large enough so that the bowl fits snugly on top.  Pour boiling water into the saucepan and set the bowl on top of it.  Keep the water at a simmer.
- Add the chocolate and butter to the bowl.  Continue stirring until well blended, then remove the bowl from the saucepan.
- Add the sugar to the egg yolks and mix with a wooden spoon until they are frothy.
- Mix the egg and sugar (and optional liqueur) into the chocolate, and stir until thoroughly blended.
- Place the bowl briefly in the refrigerator until the mixture is slightly cooler than lukewarm.  If it becomes too chilled, it will harden, so don’t let it get too cold.
- Beat the egg whites until they are stiff.
- Fold the whites into the chocolate mixture until it’s all the same chocolate-ness in color.  Do not beat or stir them or the egg whites will “fall”.
- Spoon the mousse into 4 ramekins.  You can decorate it with a sprinkling of chocolate shavings, almond slices, cinnamon, mint sprig, or anything else your imagination whispers in your ear.
- Chill briefly until ready to serve.

P.S.  This is a good recipe for lactose intolerant people, as there is neither milk nor cream, only butter, which could, I suppose, be replaced by a non-dairy substitute.  But that would be a shame.