Out and About: Exhibits: Georges Braque

I don’t recommend going to see two huge art shows on the same day.  But if you’re only in Paris for a day, or if you only have a day free, you can always get a two-fer at the Grand Palais:  Félix Vallotton and Georges Braque.  (Although you’ll have to pay two separate entrance fees.)
And if you do see both, I’d advise seeing Vallotton first.  Braque is a bit more abstract visually, more demanding.  Vallotton will feel more comfortable.
I already covered Vallotton (see Oct. 26, 2013), so now let me have a go at Braque.

Georges Braque wasn’t really my cup of tea.  But then I didn’t know all of his repertoire.  There’s a lot I still don’t like, but I have a broader view of his life’s work after this exhibit.  His earlier pieces appeal to me more because they’re more... approachable.  I find it hard to relate to something that looks like a piece of Ikea furniture waiting to be assembled, and that’s what a lot of Braque’s cubist works are like.
Born in 1882, Braque’s foundations already included Impressionism, which was old hat by the time he took up canvas and oils.  So he needed something else.  Something new.  Then before he was even 20, he discovered fauvism, with its emphasis on strong colors and refusal to be concerned with realistic representations.  In French, fauve means “wild animal”, and the wildness was what artists of this genre were after.
Braque’s early works were filled with color, whether it be landscapes like Port de l’Estaque or nudes such as Nu assis.  Braque was an admirer of Cézanne and that’s visible in Le Viaduct d’Estaque.  But when he turned away from this style, he destroyed most of his canvases.  Luckily, some had already been sold or gifted, and those are the ones that have come down to us.
As he turned away from fauvism, cubism was creeping into his works.  By the time he painted Tête de femme in 1909, he was already more geometric, more like Picasso than Cézanne.  And from there, he moved on to what he called “analytical cubism”, a style used only by Picasso and himself in which parts of an object were meant to represent the whole object... and that’s where he starts to lose me.  I guess I’m not analytical enough.
After that came “synthetic cubism”, which tried to counter the flatness resulting from geometric simplifications by adding real objects to the canvas.  In other words, he combined oils and collages, gluing real objects onto his canvases.  During these periods, he turned away from bright colors and focused on browns and greys, which also aren’t really my colors.
One thing’s certain:  Braque loved guitars.  I have no idea whether it was the sound or just the shape - probably the latter - but they crop up in a huge number of his works.  Sometimes they’re being played; sometimes they’re just in a nature morte.  Sometimes they’re harder to recognize than others:  distorted, deformed, blown to pieces... 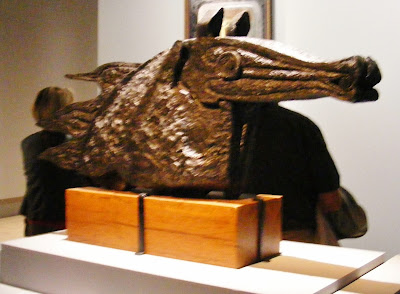 What I do like about Braque is his sculpture.  Not so much the little horsies of all shapes, yet basically the same one.  But his bronze horsehead, which - unrealistic as it is - still reflects the motion of a horse in stride.  Just look at the mane streaming out behind.  And his Hespéris is a magnificent blend of Picasso and a Mayan statue.  I don’t understand the name, because hesperus is “a flowering plant of the mustard family” that looks a bit like a violet.  Maybe he just liked the sound of the word.
Somewhere in all that, Braque was called up, sent to the front lines and seriously wounded in World War I.  After his trepanation, it took him an entire year to paint again.  Then a decade later he worked with Diaghilev and the Russian Ballet, creating both sets and costumes.  And in 1953 he painted Les Oiseaux - The Birds - for the ceiling of one of the rooms in the Louvre Museum.
After accomplishing all this, and after returning to bright colors, George Braque died in 1963.  Although this visit to the Grand Palais didn’t make me enjoy all his works, it did teach me a lot.  And there were enough canvases I did like to make it worthwhile.
Besides, he, like me, lived in Montmartre - and just around the corner! - so maybe that makes us kindred spirits under the skin.