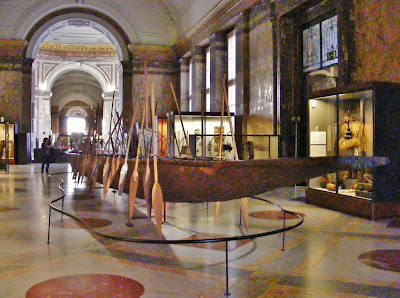 An old joke has one tourist on a 7-country junket of Europe asking another where they are.  To which comes the answer, “If it’s Monday, it must be Brussels.”
Well today is Monday, but it’s not Brussels.  Yet.

I’m at the Gare du Nord waiting for the train.  At ten minutes to departure the platform’s still not posted.  It’s easy to spot the train - it’s chocolate brown and has Thalys on its side - but there are two of them, side by side.  Which one’s mine?  The one with the attendants standing nearby, I decide.  And yes, it is so I get on.
Forty minutes later we finally leave.  Electrical problems with the locomotive.  That’s better than what I feared:  a tree fallen on the tracks in the overnight near-hurricane that the French dubbed Christian and the Brits called St. Jude.
Across from me at our four-seat table is a Belgian lady with young twins.  All the way to Brussels she reads the boys a story in Flemish.  I can’t understand a word but she does such a good job with the different voices, not to mention the special effects, that I feel I almost do.  On the four-top across the aisle is an Italian family with dog and child.  The boy spends the whole trip drawing and coloring.  We’re a very genteel and international group in this train.  And the friends I’m going to see have a four-year-old daughter who speaks German, French and very passable English.  Like I said, very international.
We zip across the flat northlands of France.  Outside the window it looks like a Dutch masters landscape, except when we pass the ultra-modern Roissy CDG Airport.  The trip is a short one:  just an hour and a half.  After all, Paris to Brussels isn’t far and we are traveling at over 100 mph.  My cellphone beeps and flips to roaming, which is how I know we’re in Belgium now.  Borders disappeared with the creation of the European Union.  No more showing of passports required.  Or changing of money.
A few minutes later we pull into the Gare du Midi station (Brussels speaks both French and Dutch) and my friends meet me on the platform.  Off we go to their house, dinner and bed.

After a good night’s sleep and a morning spent with my friends, I’m off on a quest:  the Musée Royal de l’Afrique Centrale.  This museum is made up of all the things Belgium brought back from its years of rule over Central Africa.  King Leopold II started the ball rolling in 1884, when he was given the Congo River Basin in the Berlin Conference thought up by Otto von Bismarck.  Then after that self-same Bismarck’s Germany lost in World War I, its colonial holdings were divvied up between the European powers and Belgium got what is now the Congo, Rwanda and Burundi.  A tidy little parcel of almost all of Central Africa, with its natural riches of diamonds, copper and cobalt but also petroleum, gold, silver and uranium.
Some would say Belgium pillaged its colonies.  Others would say the objects they brought back have found a home where they’re safe and admired.  All I know is that I want to see them.  And have for some time.
I’ve visited Brussels often since I heard about this Museum.  But it’s always been on Monday, and on Mondays it’s closed.  Or there wasn’t time, because it’s a fair hike outside the city limits.  But today’s the day.  Because it’s October 29 and at the end of November the museum will close for three years of renovation.
A brand-new modern building will be built nearby, with an underground gallery connecting it to the existing 1910 building, which their brochure calls “charmingly unique”.  I find it lugubre, a French word that means gloomy.  It’s dark and dim and really fossilized.  I hope the architecture will remain “charming” but the displays will be totally modernized.  During those three years, the museum’s artwork will pop up around the world as traveling exhibits and the staff will either be transferred elsewhere or have to find other employment.  One advantage for me is that everything in the museum shop is half-price or less! 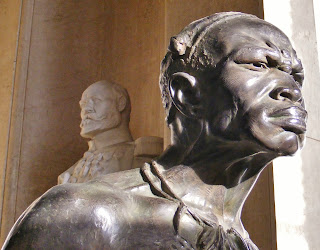 There are many parts to this museum.  There’s a history section, but I only give it a glance because I’m not a big fan of colonialism and the juxtaposed statue of a “native” and the bust of a Belgian noble makes me uneasy.  (Maybe this is one facet of the museum that will disappear with the remake?)  There’s another section on agriculture and forestry, the cornerstones of Central Africa’s initial economy.  There’s yet another on geology and mineralogy and one last section on zoology.  These are the parts that really need a good dust-off and rethink.
But the ethnography department is the one I came for.  It groups the museum’s African art and runs the entire length of the building, along the beautiful gardens and their forest backdrop. 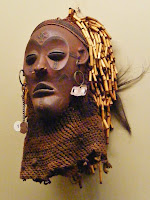 And right away I wish I knew at least as much about the various ethnic groups that make up this vast area as I know about those from West Africa who lived under the French flag.  I see names that I don’t recognize:  a Ngbaka pipe, a Luba chair, a Loi slit drum...  And looking at the tags, I wonder how many times they’ve had to be reprinted as Congo Free State became the Belgian Congo, then at independence the Republic of Congo and then the Democratic Republic of the Congo until Mobutu’s more African Zaire (which frankly is shorter and eliminates any confusion with Congo-Brazzaville) and finally back to the Democratic Republic of the Congo, or DRC which fits neatly on the little tags today.

The Musée Royal is a flashback to the museums of my youth:  overly didactic with little context.  A museum for the initiated.  So I focus on the beauty of the objects. Amazing masks, often with intricate beadwork and feathers or raffia hair.  There’s even a complete buffalo dance mask, which is really a raffia suit of several pieces and a carved buffalo head.  There are everyday objects, such as carved stools, bowls and pipes.  And my son would adore all the African musical instruments crowded into two huge display cases.  I write down all the details carefully... and then lose the paper on my way back to the house.
Getting to the Musée Royal and back is an undertaking.  From where I’m staying it’s almost an hour in all:  a bus to the tram, the tram to the end of the line, and finally a short walk.  The tram line cuts through the edges of one of Belgium’s largest forests, the Forêt de Soignes.  The colors are beautiful this time of year, even if the light is fading - Brussels is as far north as Labrador - and another storm is brewing.  But the air is crisp, it hasn’t rained on me - yet - and the beauty of all those artifacts really was worth it.

Completely tuckered out from the to-ing and fro-ing, and the trepidation of not getting lost, there’s just time for a slight rest before dinner.  Then it’s back to the train station and Paris.  On the subway, I realize how easy the Paris Métro is to follow.  In Brussels the lines loop around, and you can have the same name on a subway going in both directions.  When I change lines, I almost make that mistake and head the opposite way from where I want to go.
But I make it to the station in time to have caught the train before mine.  There seems to be one every half hour at this time of night on a weekday.  This is the corridor that links up Paris, Brussels, Rotterdam and Amsterdam.  A bit like the Northeast Corridor from D.C. to Boston in the States.  My train comes rolling in from the north right on time and only pauses for about three minutes.  There’s some jostling among natives and mild panic among tourists, but everyone gets on and we slip quietly south across the border and into Gare du Nord five minutes early... to make up for part of the 40 minutes lost on yesterday’s trip up. 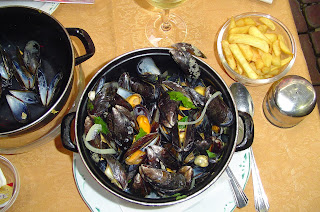 It’s been a hectic 30 hours, and I didn’t even get to the Grand-Place or have any moules-frites (steamed mussels and French... I mean Belgian fries).  I’ll just have to go to one of the Léon de Bruxelles restaurants in Paris.  But I did see my friends in their new home and I did finally get to see the elusive Musée Royal de l’Afrique Centrale and fill my eyes with wonderments. 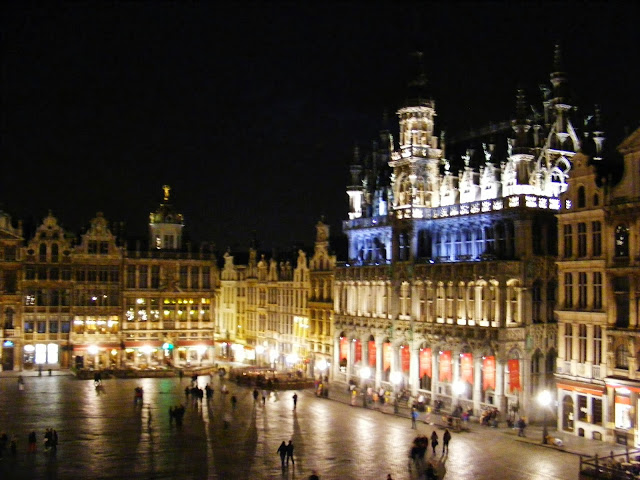