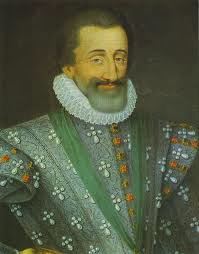 Way back in the 16th century, there was a king with three sons.  That’s usually enough to ensure a lineage will survive, but in this case it wasn’t.  They died one after the other.  So Catholic France had to look to the closest relative... who was a Protestant cousin from the Pyrenees city of Pau:  Henri de Bourbon.  A Protestant on the throne?  Heresy!
Once crowned, the cousin became Henri IV.  And he became so beloved of the people that he was soon called Le Bon Roi Henri, Good King Henry.
One reason he was loved is that he is reputed to have said “I want each laborer in my kingdom to be able to put a chicken in his pot on Sundays.”  Meaning he wanted poor people not to starve and to have at least a minimum of what the rich had... if only on Sunday.  Some meat.  It was a medieval version of Socialism, I guess.
And that brings us to this month’s recipe:  La Poule au Pot Béarnaise, dite Poule au Pot d’Henri IV - Chicken stew from the Béarn region of the Pyrenees, aka King Henri IV’s chicken stew.
It might just replace turkey this Thanksgiving. 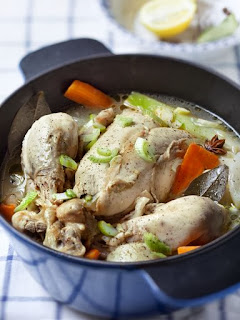 - Soak the bread in the milk and tear it into small pieces.  Chop up the ham and the giblets (liver, heart, gizzard), as well as one onion, the garlic and the parsley.  Mix it all together with the bread and then work in one whole egg plus one egg yolk and add salt and pepper.
- Stuff the chicken with the mixture and truss it.
- Put the chicken in a big Dutch oven and cover it with cold water.  Bring it to a full boil and then skim off any foam.  Lower the heat, add salt, cover partially and let simmer for an hour.
- Meanwhile, peel and wash the vegetables - carrots, turnips, leeks and celery.  Peel the second onion and stick the cloves in it.  Add all the vegetables and the bouquet garni into the Dutch oven with the chicken after it’s been cooking for an hour. Let simmer for 1½ to 2 hours, until tender.
- Place a few slices of stale country bread in the oven to dry while you take the chicken and vegetables out of the Dutch oven.  Keep them warm.
- Strain the bouillon and pour it in a soup tureen over the dried bread slices.
- Carve the chicken up, being careful to remove the stuffing whole.  Dispose the chicken on a warm serving plate.  Slice the stuffing and put it in the middle.  Place the vegetables around the chicken.  Serve hot.

Accompany with a strong red wine, but without too much tannin

P.S.  The idea of the stale country bread is to have crouton-like bread.  Thus the drying in the oven.  It's similar to French onion soup.  So this is really two dishes in one.