Out and About: Exhibits: Félix Vallotton

I defy anyone to come to Paris and not find an art exhibit they want to see.  Even if they don’t know they want to see it.
That’s what happened to me.  During a lunch with a good friend with impeccable taste, she mentioned a show at the Grand Palais:  Félix Vallotton.  And I didn’t know who that was.
I should have.  He was painting during a period I know fairly well because I love Impressionism and his artworks start around 1887, which means he’s a contemporary of all the Impressionist masters:  Pissaro, Sisley, Degas, Morisot, Cézanne, Renoir, Cassatt, Caillebotte... even the great Monet.  He’s also a contemporary of the Post-Impressionists Van Gogh, Gauguin, Seurat and Toulouse-Lautrec.  All of them, I know.  Vallotton?  Walou ( which means “nothing” in the Arabic that has infiltrated today’s French slang).
So trusting Catherine’s taste, I head off on a sunny Monday to the Grand Palais. 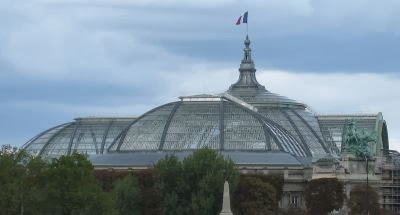 First a word about the building.  The Grand Palais was built for the 1900 World’s Fair (Exposition Universelle).  That fell right in the middle of the Art Nouveau wave and its architecture nods to that movement.  Neo-Baroque stone on the outside, but airy inside, thanks to an Eiffel-like structure - including intricate, flowing ironwork on the staircases - and of course to its glass roof.
The building totals 77,000 square meters of exhibit space.  And if you don’t understand how much that is, it’s equivalent to 19 acres.  The technical prowess of creating such a building lies in the fact that it’s all roofed in by a glass structure, the likes of which had never been possible before.
The Exposition Universelle ran from April to November of 1900.  When it closed, the Grand Palais became a museum, except for during World War I - when it served as barracks for colonial troops and later on as a hospital - and during World War II, when the Germans requisitioned it for garage space.  Oh, and then in 1944 it was used illicitly to house a circus, until a fire broke out and the firefighters had to battle not only the flames but the wild animals!
Across the street from the Grand Palais stands the Petit Palais, its little sister, also now a museum.  It, too, dates from the Exposition Universelle.

But back to Félix Vallotton.
Born in 1865 in Lausanne, he studied art in Paris at age 17, eventually taking French nationality in 1900.  His illustrations and woodblock prints made him famous in his twenties, and attracted the Nabis, a movement he joined for a while.  Vallotton painted prolifically, as did Van Gogh, and was always looking for new topics.  World War I is a dark period in his works, which express the horror of this War to End All Wars.  Afterwards, he turned back to other topics, and his fame grew until his death in 1925.  Vallotton is buried in the Montparnasse Cemetery, if you want to drop by and say hello.

This show covers the length and breadth of his art, with many works from the Musée d’Orsay and woodblocks from the Bibliothèque Nationale de France.  But many other canvases come from Swiss and American museums:  Bern, Lausanne, Geneva, Zurich, Chicago, Baltimore.  And, of course, from private collections.  It’s set up chronologically, more or less.
The first work is a self-portrait at age 20 and another at 32.  There are other portraits, including one of Emile Zola and a woodcut of Edgar Allan Poe.  There are also a few magnificent ones of African women that show great mastery in the transfer on canvas of skin colors and facial traits.  Others were probably commissions.  And there are nudes, mostly reclining but one tender one showing two bare naked ladies playing with cats.
Throughout the exhibit are many landscapes, mostly along the seaside.  One depicts a beach at Etretat, with ladies doing their laundry.  Another, of Honfleur, is so real that from across the room I think it might be a photograph.
I most like what I call Vallotton’s snapshots.  There’s one of a laundress scurrying through the streets with a load of laundry in her arms.  Another shows a woman’s silhouette searching for something in a cupboard; I imagine her being a maid because of her headscarf, or maybe she’s just the lady of the house doing some spring cleaning.  Yet another, more dreamlike, shows a boy playing with a red ball.
Of the multiple rooms, two focus on his woodcuts.  Vallotton did several series, one being what I would describe as the “ills of society”.  Another series zeroes in on what the French used to call “Le Cinq à Sept”, meaning the hours between 5 and 7 pm when men would sneak out of their office early to visit their “fancy ladies”.  The one I enjoy particularly is called L’Alerte and shows a flock of swans attacking a swimmer trying to escape to the safety of the beach.  One swan rips a hole in her bathing suit, revealing her buttocks for all to see, which was very taboo and risqué in those days.
Somewhere in the second part of the show is a room with very strange - and large - works of what the exhibit calls “modern mythology”.  Here are women being carried off by bulls or satyrs.  Dionysus and Saturnalia are rife in this room.  That room is followed by another with scenes of horror from World War I.  I find neither of these themes attractive, and they stand in sharp opposition to the rest of his works, both in style and color.
Overall, Vallotton floated from style to style.  Some works were very Impressionistic.  Others were definitely Nabi-influenced but most would probably fall into the vague catch-all category of Post-Impressionist.  They reflect a personal impression of a scene yet sometimes reducing things to bare bones, such as the boy and his ball, or the white beach with two solitary figures, or the minimalist silhouette of the woman in Le Provincial.  Some are almost photographic, like his nature morte of the bell peppers.  One dream-like oil of the Nabi variety attempts to show the movement of dancers waltzing, as did the movement of the flags flapping in the wind in Monet’s Rue Montorgueil or Hôtel des Roches Noires.
For all these reasons, Félix Vallotton is hard to pigeonhole.  Which makes it a safe bet that everyone will find something they can connect with.  A good reason to go take a peek. 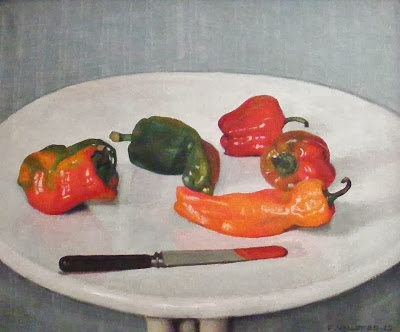