On the Road: Quercy

Paris is beautiful, but France is vast and varied.  So I’m off to the train station, headed southwest.
In the seat next to mine, a charming lady who’s crossing two-thirds of France to see her son.  She’s been traveling since 7 a.m. and this is her second train, but not the last.  I’m lucky; my trip is direct to Montauban, no changes.
My sandwich is dispatched before we clear the suburbs, it being well past noon by then.  I manage to stay awake until Tours, then fall asleep and only wake up when we slow down for the narrow gorge of Poitiers.  Then it’s Angoulême and finally our first stop:  Bordeaux.  After that, I’m on my own for the final two-ish hours.
My old friend Daniel comes to meet me at the station in Montauban.  In spite of a beard I’ve never seen, I recognize him at once by his pipe.  What a shock when he tells me it’s been 25 years since we last saw each other!  Twenty-five years since he moved out of the Montmartre apartment next to mine.  (Thank you, Internet, for locating him for me.) 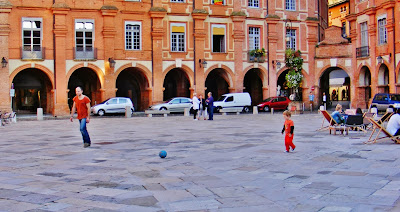 He guides me down some medieval streets and into a newly-restored square where we sit at a table outside and enjoy a drink.  Dogs come sniff our ankles and a father is teaching his son to kick a soccer ball.  All this while we catch up with the past 25 years as best we can.

Before it gets too dark, we head off for dinner high above the Aveyron River Gorge, which turns out to be more of an adventure than we expected.  The road is narrow and winding - as befits a road along a river - and Daniel’s car door on the passenger side (mine) has decided not to latch so I have to put my arm out the window and hold it shut.  Then when we get through the switchbacks and up to the top we find the restaurant in Penne is closed - it’s Monday - so back down we go and into Saint-Antonin-Noble-Val, my door coming ajar with each left turn. 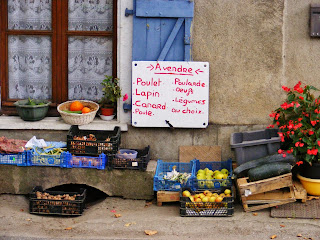 Once safely home, we drop his car off at the Renault garage conveniently located across the street.  Given that it’s Monday (see above), our food choices are extremely limited and we end up at a Basque restaurant.  We could do without the music but the food is tasty and the owners cheerful.  Then off to bed. 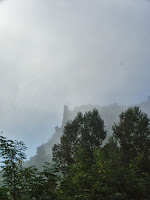 It being autumn, there’s often morning fog in the valleys here and if you get the timing right you can look down on it from the heights.  So Daniel makes a thermos of tea, we buy some croissants and we’re off in a borrowed car through the fog to the top of a hill where we wait patiently - still catching up those 25 years.  Unfortunately for us, the fog didn’t get the memo and never rises, so we head off to Penne... again. 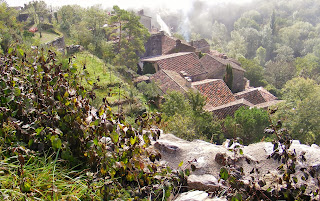 Today the restaurant is open but we’re already invited to a duck confit lunch shortly, so we walk around the village a bit.  Daniel sends me off to admire the fortress at the very top of the town, up where all respectable fortresses are built.  I’ve always found it hard not to go to the end of a road or an island or to the top of a hill... too curious for my own good.  So I decide to scrabble up to the very top and enjoy a magnificent view out over the valley, now that the fog has finally lifted.  My leg muscles won’t thank me tomorrow but the view is well worth every ache I’ll get. 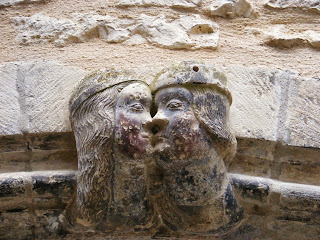 After lunch - Lord, how I love confit! - Daniel takes a siesta and I go on a second photo safari through the streets of Saint-Antonin-Noble-Val. This was once a rich town that manufactured cloth and leather sold as far away as Genoa, and many, many houses have interesting carvings over their door. Stone-carvers were both craftsmen and artists much in demand back in the 13th, 14th and 15th centuries when most of these houses were built.
After his siesta, Daniel drives me around the countryside to a whole necklace of natural jewels.  First there’s the Château de Cas, with its own chapel, probably because it was a Commanderie built by the Knights Templar in the 12th century.  It also has the requisite pigeonnier (dovecote) allowed to all castles, with the number of pigeons allowed proportional to the size of their landholding.  Pigeon droppings, like guano, were the only fertilizer available in this region back then so it was a valuable commodity.
Next on the necklace is a hamlet on the opposite side of the valley called St. Symphorien, with just a church, a priory... and a tiny graveyard which is being groomed as we arrive.  Tombs neat as a pin, hedges freshly trimmed and this in the middle of absolutely nowhere.  It’s near Caylus, a metropolis of about 1,000 people and our next stop.  In the town church hangs a huge wooden crucifix by famous Russian expatriate sculptor Ossip Zadkine, with Christ hanging by one arm and no cross in sight; it’s quite striking in its modern-ness and was gifted to the town when Zadkine lived near here, in thanks for hiding Jews like him during World War II.
Just outside bustling Caylus, where dogs sleep undisturbed in the middle of the street, Daniel sends me on a walk down one of the steepest, slipperiest trails ever, where no less than seven mills, one above the other, stretch backwards in time, the oldest just a remnant of walls with centuries-old trees growing out of the windows and through a non-existent roof.  At the end of the trail flows a strangely smooth waterfall that advances every year as the minerals in its water build it outwards, like the stalactites in limestone caves nearby.
Last of all is Lacapelle-Livron, another farm village of only about 100 souls.  Along with a few similar farming outposts on this ridge, it was built in the 12th century by the Knights Templar, home from the Crusades.  When the Order was disbanded by the pope in 1312 the village was taken over by the Knights of Malta, who held it until the French Revolution in turn put an end to the world as they knew it.  Like all the Templar villages, it’s made up of a fortified manor with its roof of flat stones called lauzes, a Romanesque church and a few farms.  That’s all.  But the most remarkable jewel of all is tiny Nôtre-Dame-des-Grâces nearby, a chapel for pilgrims.  It stands all alone by a simple stone cross and balanced on the edge of the ridge overlooking the Bonnette River, a little fortress worthy of the ghosts of the Crusaders.
After all these sites of quiet beauty, it’s back to Saint-Antonin-Noble-Val for dinner with poet friends of Daniel’s, and a good night’s sleep before he drives me to Albi in the morning.
There’s so much peacefulness now in this region once torn by bloody religious wars stretching over centuries.  And Albi was one of the centers.  But that’s tomorrow.