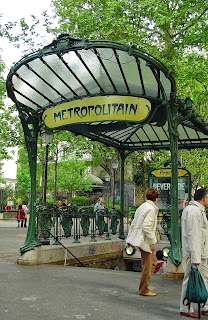 It’s July 1st.  I’m leaving tomorrow, back to Michigan.  This is my last night in Paris... and I’ve spent it in the suburbs.
One of my oldest friends, met during my film-subtitling days, is celebrating her birthday and for once I’m in town.  As a matter of fact, I planned my return flight around this evening.  And it’s been great.  Wonderful food, excellent wine, sparkling conversation with interesting people... all of it out on the terrace overlooking the hills beyond as this sunny day turned to rosy evening turned to starry night.  And now it’s time to go home.
Someone offers me a ride to the Métro because there aren’t any more trains at this hour.  It seemed straight-forward enough of a proposition.
Notice the word “seemed”.

We say our good-byes, kisses on cheeks, hugs... then out into the night.  All five of us squeeze into the European-size car and we’re off down the hill on winding streets that rock us back and forth into one another.  Then across the Seine and to the Métro station.  I say a quick merci and scramble down the steps.  This is not the only subway train I need to catch, and the expression “it’s later than you think” keeps popping into my mind.  Precision on this trip needs to be as well-timed as a Swiss watch in order for me to make them all.
If my escort had left me at another subway line, I’d have had various possibilities, some with only one change of trains.  And one of those lines would have been a slam-dunk:  one change and then my usual line that would drop me off at my friendly neighborhood station.  But I’ve been dropped off at Pont de Sèvres, the nearest to my friend’s house but the most remote from my home.  And with two subway changes, it’s the least favorable configuration for what’s facing me:  the prospect of missing le dernier métro  (as in Truffaut’s film) and being left to finish my return trip on foot, alone, in these wee small hours of the morning.  It’s been years since I worried about catching the last subway home.  In fact, it’s been decades.  Have I still got What It Takes? 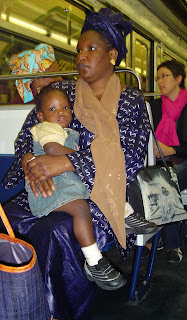 Unfortunately this first subway train keeps us waiting for about seven minutes.   I say “us” because I’m not the only person waiting on this platform.  There are young people who have been drinking a bit too much but are just happy to be together.  There are families who were probably also visiting friends and are headed home with sleepy children, some in drag-footed  tow and others already sleeping in their parent’s arms.  There are cleaning ladies who have finished putting floors and floors of offices back into working order for tomorrow’s business.  There are lovers either having one last snuggle or warming up for the coming night’s caresses... who’s to know?

When the train arrives, we hurtle along the tunnel at breakneck speed and when we reach a station the driver leaves barely enough time for people to get off and on before shutting the doors and steaming off again.  He knows we’re all anxious to get home.  So’s he, I’m sure.  It’s well after 1 a.m.  One stop, then two, three... all the way to the eleventh:  Trocadéro.
I jump off and walk as fast as I can down the hall with a passel of other scurrying people.  We’re all looking at our watches, if not actually, at least mentally.  I start to feel pretty optimistic though when my second train comes almost immediately.  Only three stops on this line and then it’s the home stretch.  I can smell success already.
We arrive at Etoile and everyone starts scrambling, me included.  I know this change so well I could do it in my sleep.  Down the stairs and along the hall and BINGO!  There it is!  The Promised Land.  The platform of the third subway line that will take me to Pigalle.  Then I only have to walk up the hill.  I look at the board overhead and see that le dernier Métro is in two minutes.  So I wait.  We all wait.  All is well. 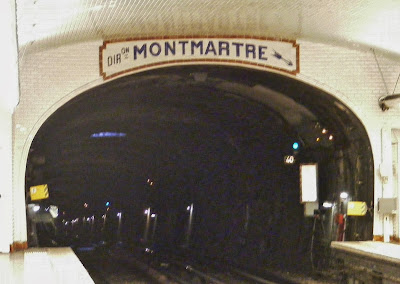 There are two Pretty Young Things standing nearby on the platform, two Americans, a tanned blonde in short shorts (remember, it’s July) and a pale brunette in jeans.  They’ve attracted the particular attention of two young men who also aren’t French.  The more forward of the two, the one with a baseball cap on backwards, tries to talk to the blonde, while the brunette and the shy guy look on from opposite directions.  The blonde seems to be enjoying it; the brunette?  not so much.  That goes on for more than two minutes.
Two minutes?  Hmmmm.  I look up at the board.  It says “Next train: 1 minute”.
Bold Guy asks Blondie - in fairly good English but with a heavy Italian accent - where she’s from.  “Florida, and she’s from Tennessee.”  Bold Guy knows of Florida but not Tennessee; he even has family in Florida, or so he says.  Then the usual questions.  How long have you been in Paris?  Are you having a good time?  What have you seen?  “Eiffel Tower, but it was closed.”  “Well, my cousin and I are from Italy.  We know Paris.  We can take you there tomorrow morning...”  I watch covertly and listen, amused, remembering an infinite number of such conversations from my days at the Université de Paris, addressed to me or to my girlfriends.  Standard Operating Procedure out of a script that hasn’t changed.  Ever.
Hey, hasn’t it been one minute yet?  I look up at the board.  It says “Next train: 2 minutes”.  Something’s not right.
Bold Guy calls Shy Guy over and introduces him.  Tries to hook Shy Guy up with Brunette.  Neither seem comfortable with the whole deal.  Brunette sends angry glances to Blondie.  Doesn’t look like this is their first rodeo here in Europe and it’s starting to get old.  Blondie replies silently with the “oh-come-on-what-harm-can-it-do” look.  During that time, The Guys appear hopeful; they think their prospects for the rest of the night have brightened considerably.
And then the bottom falls out of the whole thing.
Four men dressed in Métro uniforms come down the steps and onto the platform.  “We’re closed,” they shout.  General uproar!  “There are no more trains.  Everybody has to leave.”  Protests all around.  Angry glances and incriminating fingers pointing to the sign above that still says “Next train: 2 minutes”.
Then the four guards start herding us toward the exit stairs.
The girls look at each other, panic in their eyes.  “What do we do now?” Brunette asks Blondie.  The Italian Duo offer their escort services.  The girls look even more uncomfortable.
I step up and ask in English where the girls were headed.  The foursome look at each other in surprise as they realize someone has understood their entire exchange.   The girls’ hotel turns out to be in my neighborhood.  “Come on”, I tell them.  The Guys look at me with daggers in their eyes.  But I turn my back and head off up the stairs... and the girls choose to follow.  Bold Guy and Shy Guy just stand there looking at each other.  I think I hear some cursing in Italian behind us on the platform.

We hit the cool night air with the Arc de Triomphe in the background, its lights out at this late hour.  I walk to the side of the busy street, my protégées in tow, and I see a taxi coming.  I raise my hand and the driver stops.  The three of us pile in.
Decidedly more up-key than a minute ago, the girls ask me lots of questions about how long I’ve been here - many the same as the Two Guys asked them in the Métro.  I point out some buildings to them as we zip by - it’s a quick ride across Paris when cars are scarce.  The girls are doing a Tour of Europe for a few months.  It reminds me of the era when all American youths wandered the Old Country with a copy of “Europe on $5 a Day” tucked under their arm; now it’s Rick Steve and you can add a zero to that figure and still be optimistic. 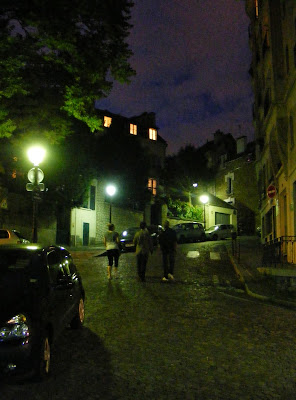 When we reach Pigalle, I tell the driver to pull over.  My budget is greater than the girls’, so I pay him.  It seems to surprise the girls that a stranger would do that for them.  We walk up the street into what used to be a red light district.  Not a hooker of any sex (that includes transvestites) is left nowadays.  After one block, I point them on their way, which is opposite to mine, and we say good-bye.  They thank me over their shoulder for at least 100 yards.
I wonder what their version of this story will be when they tell it back home.  About how they were totally lost, didn’t know how they were going to get back to their hotel, or even find it without their mental breadcrumbs from their usual Métro stop.  And then this stranger stepped up...
I was happy to have been their mother for a minute.
I’m sure Italian Guys 1 and 2 didn’t feel warm and fuzzy toward me though.  Maybe they managed to find another two girls.
At any rate, it was a fun evening... with an interesting finish.