A Page Out of History: Rose Valland

If you’ve ever seen John Frankenheimer’s 1964 movie The Train starring Burt Lancaster, you’ve heard Rose Valland’s story.  But you probably barely noticed her character, played with fitting understatement by iconic French actress Suzanne Flon, because the movie’s focus was placed on France’s railroad heroes, who truly did so much to sabotage and stall the Nazis, especially in the final days of France’s Occupation.
The train in the title was requisitioned to carry off thousands of French artworks before the impending Allied liberation of Paris.  Early in the film, Flon is introduced to Lancaster, the film’s hero, as Mademoiselle Villard from the Jeu de Paume Museum.  Which is correct, except for the cosmetic two-letter change in her name (and one wonders why they bothered).  Flon speaks softly and her demeanor is muted, her looks ordinary (as were Rose’s).  But she fully understands the value of the paintings while the railroad characters see them only as “a load of pictures” whose value is merely “what they’re worth” on the market.  They think she wants the train carrying them off to Berlin to be bombed.  To which Villard/Valland replies, “Oh no!  They must not even be damaged.  They could never be replaced. (...)  The paintings are part of France.  (...)  This is our pride, what we created and hold for the world.  There are worse things to risk your life for than that.”
And risking her life is exactly what the real Rose Valland did, every day, throughout the four long years of Nazi occupation. 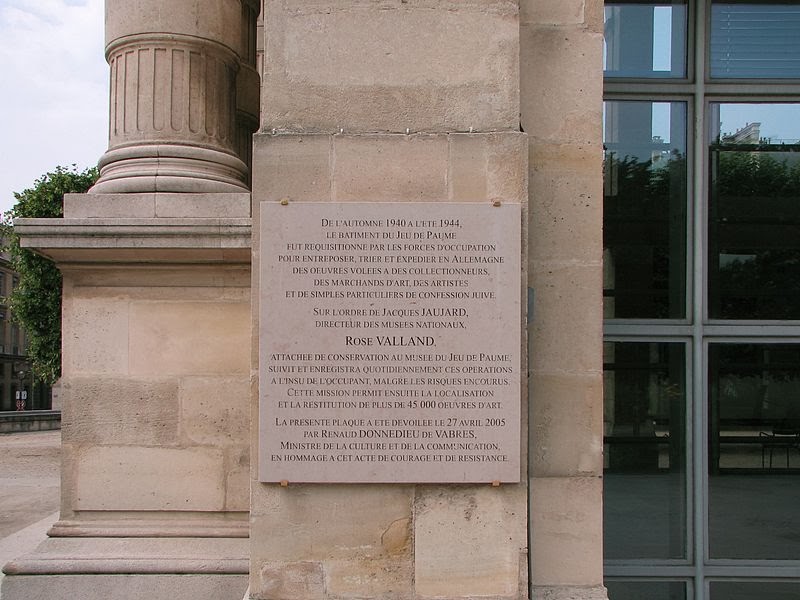 I’ve visited the Jeu de Paume dozens of times.  On one of those visits, I noticed a plaque on the south side of the building.  Put up in 2005, it told a strange story of a woman who listed daily all the artworks the Nazis had confiscated and stored in the museum.  Had her efforts been discovered, she would have been executed.  At the end of World War II, the lists she comprised made it possible to locate and return over 45,000 artworks spirited away by the Nazis.
Her unassuming, even bland demeanor helped her in her task.
The daughter of a blacksmith, Rose Valland was born in 1898 in Saint-Étienne-de-Saint-Geoirs, a small town near Grenoble.  A simple art teacher, she ended up studying at L’Ecole des Beaux-Arts in Paris, then the Ecole du Louvre, and even the Collège de France.  But teaching art didn’t satisfy her.  Longing to be closer to the artworks she adored, she volunteered as the assistant curator at the Jeu de Paume in 1932.  That was as high as she could aspire.  Above that level, you needed to be Somebody... and she wasn’t.
Then came the war.
By 1941, the Director of France’s National Museums and Curator of the Louvre Jacques Jaujard had come to appreciate her for her devotion.  And he needed someone to help him.  Because Jaujard hid a second persona beneath his discreet curator’s exterior:  he had links to the French Résistance.  “There are fights that you may lose without losing your honor”, he said; “what makes you lose your honor is not to fight them.”  Before France’s defeat, Jaujard spirited away most of the jewels of the Louvre’s collection.  The Mona Lisa, the Wedding at Cana, Venus de Milo and the Winged Victory of Samothrace...  all gone.  What he turned over to the Nazis was virtually an empty museum.  When they fired him, all the staff of all the French museums quit.  As the Nazis wanted to rule an orderly France and needed the museums to function, he was reinstated.  Perhaps the Nazis hoped to win him over and learn where the treasures were hidden.
Instead of that, Jaujard hired Rose Valland, with pay, to oversee the Jeu de Paume Museum as the Nazis used it as a clearing house for all the artworks they confiscated from other museums and from Jews who had fled or been rounded up.  The secret part of Rose Valland’s job was to make an exhaustive list of all those artworks and where they were sent.  No small task.  And the list was long.  Renoir, Cézanne, Braque, Degas, Picasso, Matisse, van Gogh, Gauguin, Manet and Monet,  Miro, Seurat, Utrillo, Roualt, Vlaminck, Dufy, Toulouse-Lautrec... Over 20,000 pieces of art passed through the Jeu de Paume.
The Nazis were admirable bookkeepers.  What they didn’t know was that Valland spoke enough German to understand the conversations she overheard and the documents she saw.  All her information was passed on to Jacques Jaujard, the only person she trusted, and from him to the Résistance, who frequently blew up trains.  And that’s where the movie The Train comes in, even though it takes considerable liberties in the telling of the tale.
At the end of the war, the Allied Forces wanted to restore the art stolen from France, as well as from other occupied countries.  For that purpose, and that purpose only, the Monuments Men were created.  One of them, the one assigned to Paris after its liberation on August 24, 1944, was James Rorimer.  Hitler’s orders to General von Choltitz, the Nazi commander of Paris, were to blow the city up, leaving the Allies with only “a field of ruins” to liberate*.  Luckily, von Choltitz didn’t carry out those orders, even though dynamite had been placed under every bridge and monument in the city.  Even Notre-Dame.  Rorimer’s job was to find all the paintings, all the sculptures, all the other works of art stolen by the Nazis.   Ever wary, Rose Valland entrusted him with only as much information as he needed at the moment, until she was convinced he could be trusted.  But even then, she led him from discovery to discovery.
Rose Valland served as Conservator of the French National Museums, a post she never would have won without her unflagging proof of her love of art.  She retired in 1968 but worked on to help with the restitution of any artworks that resurfaced.  She was awarded top honors by her government and by the Résistance, as well as the Medal of Freedom by the U.S. government and even the Officer’s Cross of the Order of Merit by the Federal Republic of Germany, which is highly ironic.  She died in 1980.

If you’re interested in this part of history and by Rose Valland, here are some sources of more information:
The Monuments Men, a book by Robert Edsel, tells the story of how these treasures were hunted down and spotlights the contribution of both Jacques Jaujard and Rose Valland.  A film by the same name is shortly to be released, with George Clooney as the director and star as well as the writer of the screenplay.  Cate Blanchett plays Rose Valland, which is physically poor typecasting for the forgettable forty-something spinster, but as an excellent actress, she may pull it off.
The book The Rape of Europa by Lynn Nicholas and the 2007 documentary of the same name both tell the tale of the Nazi theft of Europe’s art treasures, with a special segment on Rose Valland’s role in recovering it.
If fiction is more your thing, Sara Houghteling's first novel, Pictures at an Exhibition (2009), bases her character Rose Clément on the real- life Rose Valland.  The physical description is far off the mark, but the description of her work accurately portrays Valland’s real life.
For that, there’s Le Front de l’Art by Rose Valland, which has been on my list of books to find and read for many years.  It tells her story.  And who better to tell it than herself?
Frankenheimer’s film The Train was loosely based on the book Valland wrote.  As it opens, Nazi Colonel von Waldheim arrives before dawn to stare at the paintings hanging in the Jeu de Paume.  He stops before a Gauguin.  Mlle. Villard/Valland appears behind him, in the shadows.  Which is very fitting because Rose Valland, like Jacques Jaujard, worked in the shadows.
And if you ever tour a French museum, look for the initials MNR.  They stand for Musées Nationaux Récupérations and can be found on some 2,000 works that “disappeared” during World War II and whose owners have never been identified... but probably who themselves “disappeared" in one of the Nazi concentration camps, on the way there or on their way back.   Keep in mind the poignant final paragraph of Houghteling's novel:  “If you are ever in France, and from a distance you see a painting that looks roughly handled for a masterpiece - in the Musée d’Orsay, or any of the other hundreds of museums - look closely at the placard beside it, and you will likely see the letters MNR.  I can still recall the first time I saw them, next to a Sisley with a torn corner.”


* For more about the von Choltitz episode, see my blogpost of October 21, 2011:  Out and About: Events:  Diplomatie.